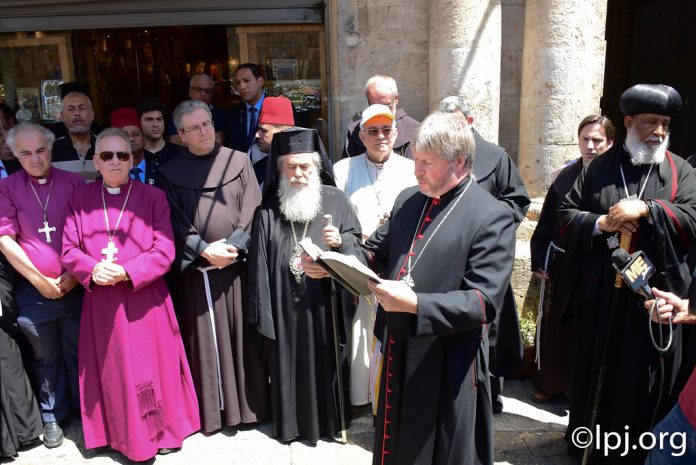 JERUSALEM – On Thursday, July 11, 2019, the Heads of Jerusalem Churches held a prayer rally near Jaffa Gate’s Imperial and Petra Hotels, in protest of Israel’s Supreme Court’s decision to overturn the appeal made by the Greek Orthodox Patriarchate against the sale of three of its properties to settlers’ group.

The rally ended inside the Imperial Hotel where Patriarch Theophilus held a short conference, during which he voiced his refusal, as a community of reconciliation, for radical groups to “dilute the integrity and character of Jerusalem’s Christian Quarter”, demanding that the rule of law to be upheld against any attempt to take Church properties by powerful measures.

He concluded by praying for the peace of Jerusalem and inviting the Christians everywhere to converge in prayer on September 2019 for an international day of prayer for the Christian communities in Jerusalem.