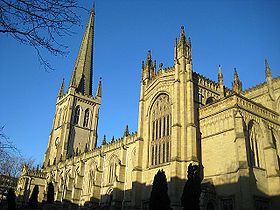 Sir William Fittall, the Independent Reviewer in relation to the House of Bishops’ Declaration on the Ministry of Bishops and Priests, published his Report on Wakefield Cathedral on 28 February 2019. The Report was occasioned by my decision, in consultation with the Cathedral Chapter, to remove from the published worship list the names of those presiding at celebrations of the Eucharist in the cathedral. As I said at the time of the Report’s publication, I am grateful to Sir William for the care and thoroughness with which he approached his task and for his measured conclusions. I am also grateful for his forbearance with the length of time it has taken me to issue my response. Before making any substantive public statement, I wanted to discuss the matter further with my Chapter colleagues and to consult both the Bishop of Leeds and my colleagues in the College of Deans. This process has taken some time.

I have now notified Sir William that I intend to keep the existing policy in place, but with a significant adjustment which I believe to be in line with the spirit of his conclusions. I will be offering a pastoral, face to face, meeting with anyone who is a regular member of the worshipping community at Wakefield Cathedral who is unable for reasons of conscience to accept the priestly ministry of women. This will afford the space for a shared conversation and the opportunity for me to offer to send a paper copy of the quarterly rota when it is published. This will be on the understanding that it is for their personal use and that it may change at short notice. I am pleased to say that I have already had such a conversation with the individual whose letter of concern prompted the Review and the person concerned is reflecting on this offer.

In his Report Sir William wrote of the need ‘to seek to maintain the highest possible degree of communion’ between those who differ on the matter of the ordination of women to the priesthood. As Dean of Wakefield, I take my responsibility for playing my part in that search very seriously and it is my sincere hope that the way forward I have outlined will be received in the same spirit with which it is offered.

Out of respect for Sir William and the process entrusted to him, as well as for the person who raised the original concern, I shall not be offering any further public comment or engaging on social media about this matter, and I would urge others to show the same restraint.