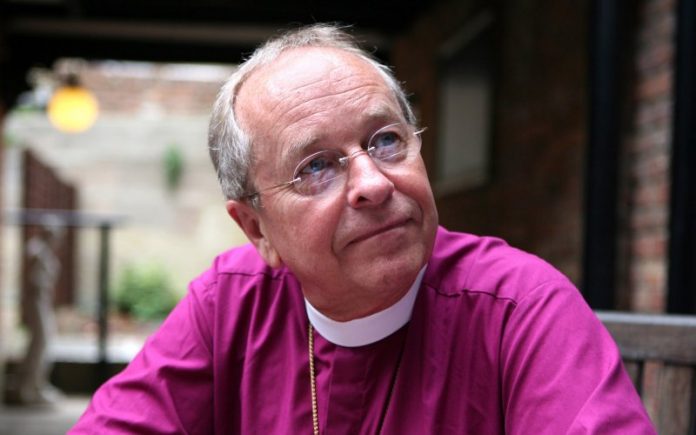 A chapel named for retired Episcopal Church Bishop Gene Robinson was dedicated Thursday as part of the consecration of a newly redeveloped Washington, D.C. church building.

St. Thomas’ Episcopal Parish chose to honor the former New Hampshire bishop who was the first openly partnered gay man to be consecrated a bishop in the Episcopal Church and the wider Anglican Communion. The chapel is envisioned as a pilgrimage site for youth who identify as lesbian, gay, bisexual or transgender (LGBT). Robinson’s 2003 consecration as bishop was one of several contested actions fueling a broader Anglican realignment in North America and beyond.

The May 30 consecration service was led by Robinson, Episcopal Diocese of Washington Bishop Maryann Budde, and St. Thomas Priest-in-Charge Alex Dyer. Backed by twin windows of rainbow-hued stained glass and a metal Celtic cross, Robinson prayed “deliver your servants, when they draw near to you in this place, from coldness of heart and wanderings of mind, that with steadfast thoughts and kindled affections, they may worship you in spirit and in truth, through Jesus Christ, our Lord.”

Robinson, now divorced, resides in Washington and serves as bishop-in-residence at St. Thomas. He also serves as a senior fellow with the liberal think tank Center for American Progress.

Redevelopment of the St. Thomas parish church has been long in the making. Once regularly attended by President Franklin D. Roosevelt (who served on the church vestry while Assistant Secretary of the Navy in the Wilson Administration), the church was heavily damaged by arson in 1970, its main sanctuary destroyed. The parish, located in the Dupont Circle neighborhood, became closely associated with the LGBT community, still reflected today in its membership.

St. Thomas has declined precipitously in the past decade, shrinking from 350 to 140 members (-60%) and from a weekly attendance of 150 down to 50 (-66%). In 2018 Dyer cited the ongoing construction of the new church sanctuary and a purge of the parish membership rolls as contributing factors to the congregation’s diminished size. Asked about the decline in attendance, Dyer commented via Twitter “ASA is one measure. @StThomasDC is one of the most best parishes I have served. Check back in 5 years and the story will be different.”

The seven-story project was largely funded by an agreement with a property developer who turned the valuable urban parcel of land into residential units alongside the redeveloped church. The Dupont Circle Citizens Association and other neighborhood critics fiercely opposed the project, which was delayed by a court stop-work order. Dyer was briefly notable in 2017 on social media for wrapping banners around construction fences at St. Thomas in which an image of a face-palming Jesus was accompanied by political messagesincluding the tagline “a progressive church for a progressive city.”

Despite the small size of its congregation, St. Thomas has had outsized influence upon the Washington Diocese. In 2018 Dyer submitted resolutions to diocesan convention to encourage all parishes to make “all gender-specific facilities and activities fully accessible, regardless of gender identity and expression” and “…eliminate, when possible, all gendered references to God and to replace them with gender neutral language.” Versions of both resolutions were adopted.