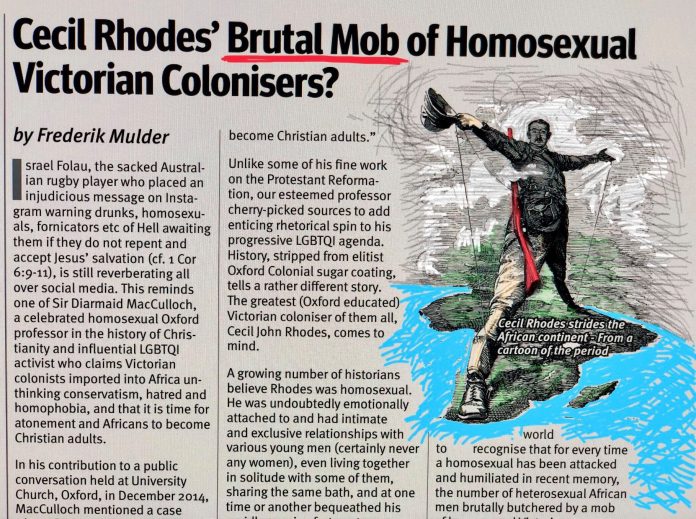 Israel Folau, the sacked Australian rugby player who placed an injudicious message on Instagram warning drunks, homosexuals, fornicators etc of Hell awaiting them if they do not repent and accept Jesus’ salvation (cf. 1 Cor 6:9-11), is still reverberating all over social media. This reminds one of Sir Diarmaid MacCulloch, a celebrated homosexual Oxford professor in the history of Christianity and influential LGBTQI activist who claims Victorian colonists imported into Africa unthinking conservatism, hatred and homophobia, and that it is time for atonement and Africans to become Christian adults.

In his contribution to a public conversation held at University Church, Oxford, in December 2014, MacCulloch mentioned a case of an African homosexual being “brutally attacked” by a mob of men and rushed to hospital for medical attention. Bishops from the Anglican communion, he claimed, are encouraging this “work of hatred” and are “soft pedaling on the homophobic alliance” of conservative African Christians. It is time, he contends, for Bishops to be liberated from their “unthinking conservatism”. Tying these claims together, MacCulloch said “we” once “imposed” our values on others, when Great Britain imported Victorian homophobia to Africa. The picture painted is one of a band of heterosexual Victorian Christian men, forcefully imposing unthinking conservatism and a culture of British homophobic brutality on African nations. The solution?

“Now it’s our duty of atonement for past British colonial mistakes, to do what family members should do: to tell … African Anglicans to become Christian adults.”

Unlike some of his fine work on the Protestant Reformation, our esteemed professor cherry-picked sources to add enticing rhetorical spin to his progressive LGBTQI agenda. History, stripped from elitist Oxford Colonial sugar coating, tells a rather different story. The greatest (Oxford educated) Victorian coloniser of them all, Cecil John Rhodes, comes to mind.

A growing number of historians believe Rhodes was homosexual. He was undoubtedly emotionally attached to and had intimate and exclusive relationships with various young men (certainly never any women), even living together in solitude with some of them, sharing the same bath, and at one time or another bequeathed his rapidly growing fortune to some. Think of e.g. Neville Pickering (the love of his life until his early death), Harry Currey, Philip Jourdan (providing uncontested erotic evidence), Frank Johnson, Johnny Grimmer (Rhodes’ favourite among the younger men), Gordon le Sueur, Dr Leander Starr Jameson, Sir Charles Metcalfe (his intimate Oxford friend), Lord Alfred Milner and various close friends and warm supporters widely known in British homosexual circles. In fact, in a recent volume, it was demonstrated (with documentary evidence) that “it is impossible to understate the power and the influence Rhodes would exert on British politics through a number of very influential homosexual men”.

It was this Rhodes, with his band of (at least some) homosexual men, who planned, financed, and executed his Victorian invasions for the “finest race in the world” with unrivaled, deceitful precision and premeditated brutality, eliminating traditional heterosexual African communities. Rhodes’ men were not only armed to the teeth with the deadliest and most sophisticated weaponry of the British Army, they were also prepared spiritually and escorted by Canon Francis Balfour, Rev. Sturridge from Her Majesty’s Anglican Communion, a Roman Catholic Jesuit father, Archibald Colquhoun, and most importantly, a message from God himself, through His intermediary Rhodes, securing victory with instructions from the mouth of Jesus in Luke 14:31. Invasion successfully executed, and with countless smoldering corpses of heterosexual African men in the Rhodesian sun, Rhodes’ Anglican Bishop ceremonially proclaimed- with his musical and penetrating voice – God’s eternal blessing on their victory.

Dear Professor MacCulloch, you are right that it is time for atonement and for shoddy, superficial theology, hatred and brutality (on all sides of the debates) to come to an end. Brutality and unchristian hatred of our neighbours has no place in the 21st century.
Has the time not come for the world to recognise that for every time a homosexual has been attacked and humiliated in recent memory, the number of heterosexual African men brutally butchered by a mob of homosexual Victorian men can be multiplied in the hundreds, if not thousands? As a reputable historian, you know that history is often written by the victors. In recent times the LGBTQI movement has clearly been the victors in especially Western centres of higher learning, business and sport. Will you have the integrity to allow the atrocities committed by homosexual British men – until now basically shoved under the carpets of massively endowed Oxford colleges – to be examined and receive the attention it deserves?