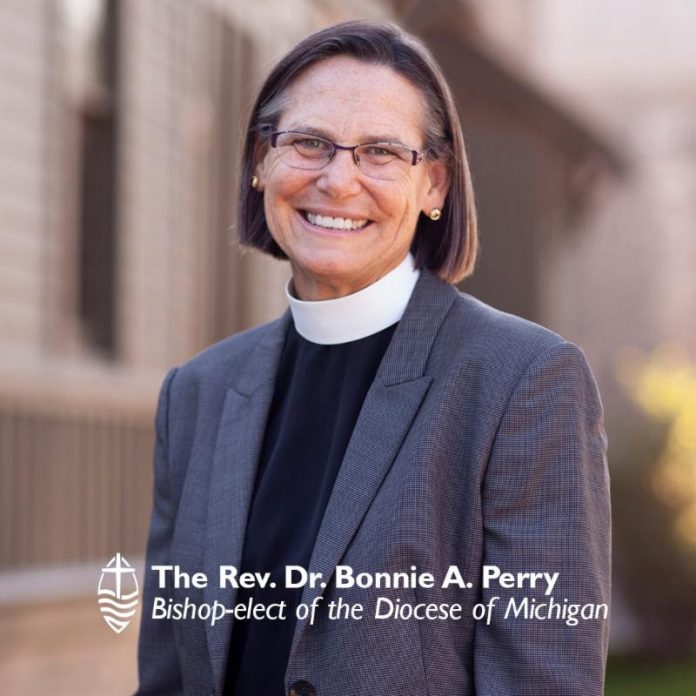 The Episcopal Diocese of Michigan has today announced the election of The Rev. Dr. Bonnie A. Perry, Rector of All Saints’, Chicago, as its 11th bishop diocesan.

Perry is the first woman and first openly gay priest to be elected bishop since the diocese was formed in 1836. This also marked the first time in the history of the Episcopal Diocese of Michigan that the slate of candidates was comprised entirely of women.

Perry was elected on the fifth ballot of the Special Electing Convention held today in Detroit. She received 64 clergy votes and 118 lay votes. A minimum of 55 clergy votes and 94 lay votes were necessary for election on that ballot.
The other nominees were:

“I am in awe of the trust you have placed in me, and I will, with God’s help, do all I can to live up to this trust and this honor, ” Perry said following her election, “I am so excited about the ministry we are going to do together. Thank you. Thank you. Thank you.”
Perry holds a holds a Doctor of Ministry degree from Seabury-Western Theological Seminary and a Master of Divinity degree from Union Theological Seminary in NYC. She was ordained deacon and priest in 1990 in the Diocese of Newark. Perry and her spouse currently reside in Chicago and will relocate to Michigan this year.

Pending the consent of a majority of the bishops with jurisdiction and a majority of the Diocesan Standing Committees, Perry will be ordained and consecrated on February 8, 2020 in the Diocese of Michigan. The Most Rev. Michael B. Curry, Presiding Bishop and Primate of The Episcopal Church, will serve as the chief consecrator.

The Episcopal Diocese of Michigan is comprised of 75 congregations and over 16,000 baptized members.