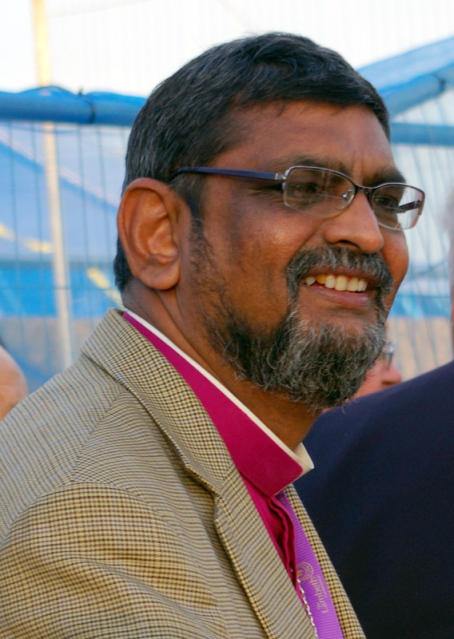 Archbishop Ian Ernest, the Bishop of Mauritius and former Primate of the Anglican Church of the Indian Ocean, is to become the Archbishop of Canterbury’s next Personal Representative to the Holy See and Director of the Anglican Centre in Rome. He will take up his new role towards the end of the year following an official Papal Visit to Mauritius by Pope France in September.

In his current role, Archbishop Ian has worked closely with his Roman Catholic counterpart, the Bishop of Port Louis, Cardinal Maurice Piat. The two have written joint statements on environmental and social issues and have delivered joint Christmas messages for Mauritian television.

The two co-lead one of the top schools on the Mauritian island of Rodrigues, the ecumenical Rodrigues College, which was formed in 1973 by the merger of St Louis Roman Catholic School and St Barnabas Anglican School. When Archbishop Ian’s mandate as Archbishop and Primate of the Indian Ocean was renewed in 2012, he invited a Roman Catholic priest to preach the sermon.

“I feel deeply honoured and humbled by this appointment”, Archbishop Ian said. “It is a calling from God which I accept with all humility. I will try my best to honour this calling and to honour the office.

“I look forward to working in close collaboration with the Archbishop of Canterbury and the Board of Governors of the Anglican Centre in Rome.”

The Archbishop of Canterbury, Justin Welby, said that he was “delighted” with the appointment, saying that it “comes at an exciting time in the growing and important relationship between the Anglican Communion and the Roman Catholic Church.”

He added: “The Anglican Centre in Rome was established just over 50 years ago at the time of the first public meeting between a Pope and an Archbishop of Canterbury since the Reformation. Over the past 50 years the relationship between my predecessors and successive Popes; and the connections between people involved in official ecumenical dialogues, has deepened that relationship. It is bearing much fruit – as the joint Anglican, Catholic and Presbyterian retreat at the Vatican last month for the political leaders in South Sudan demonstrates.

“Archbishop Ian will bring to his new role a wealth of experience in practical ecumenical engagement; and significant connections throughout the Anglican Communion. I look forward to working with him as we continue to develop our relationship with the Catholic Church.”

Bishop Michael Burrows, the Bishop of Cashel, Ferns and Ossory in the Church of Ireland, chairs the Anglican Centre’s Board of Governors. He welcomed the appointment, saying that Archbishop Ian “brings with him to Rome great enthusiasm for the task, a warm personality and vast experience of his own province and the wider Anglican Communion as a former Archbishop of the Indian Ocean.

“He will be very well suited to the work of an ambassador for the whole Communion in Rome, and to strengthening the role of the ACR as a place of hospitality and study. His track record in practical ecumenism is highly impressive, and the Governors look forward to working with him in the coming years and cherishing his great vision and energy”.

His experience in ecumenism dates to his childhood, when his father became the first Anglican priest to preach in a Catholic Church in Mauritius. He attended Roman Catholic primary and secondary schools and, when he was studying for ordination, attended some courses at a Roman Catholic seminary.

He was awarded the Cross of St Augustine for services to the Anglican Communion in 2008 by the then-Archbishop of Canterbury, Dr Rowan Williams. In March this year, he was made Grand Commander of the Order of the Star and Key of the Indian Ocean (GCSK) – the highest rank or distinction of Mauritius’ civilian honours – by the country’s Acting President, Barlen Vyapoory.

He is a member of the Archbishop’s Task Group, established following the 2016 Primates’ Meeting to “restore relationships, rebuild mutual trust, heal the legacy of hurt and explore deep differences” in the Anglican Communion, and was a member of the Design Group for the 2008 Lambeth Conference of Anglican Bishops.