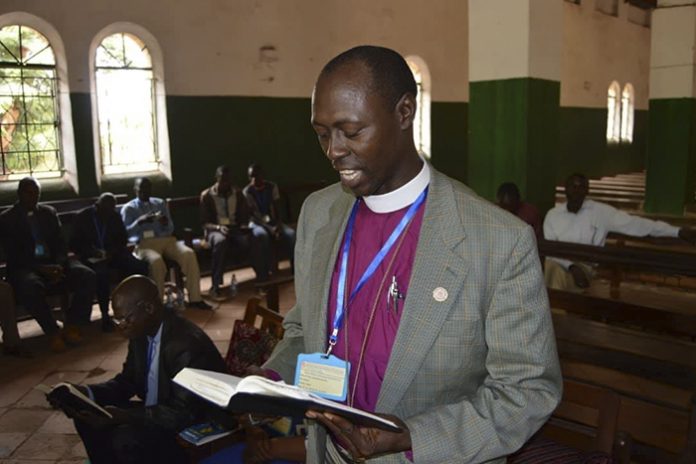 The Bishop of Nzara, Samuel Peni, has been elected Bishop of Yambio and Archbishop of the Church of South Sudan’s Internal Province of Western Equatoria. He will be installed into both new roles on Sunday 10 March 2019 to succeed the late Archbishop Peter Munde Yacob, who was also the Provincial Dean.

After the results of the electoral college were announced, the other candidate, Bishop Wilson Kamani from the Diocese of Ibba, congratulated the Archbishop-elect and the two bishops hugged.

The electoral college took place in All Saints’ Cathedral in Yambio; which will host Archbishop-elect Samuel’s installation on Sunday. The Primate of South Sudan, Archbishop Justin Badi Arama, arrived in Yambio on Tuesday with his wife Mama Joyce and a team from the Provincial Office. “We were warmly welcomed by the bishops and Christians of the Internal Province of Western Equatoria”, he said on Wednesday. “After being welcomed at All Saints’ Cathedral we took time to pay our respects at the grave of Archbishop Peter Munde.”

Archbishop Justin presided at an Ash Wednesday service in the cathedral, and the bishops held a time of prayer and fasting ahead of yesterday’s election. “Please join me in praying for [Bishop Samuel] as he prepares to take up this new role”, Archbishop Justin said.