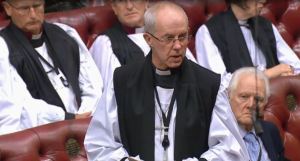 On 9th January 2019 the House of Lords debated the Government’s EU Withdrawal Agreement and Political Declaration. The Archbishop of Canterbury, the Most Rev Justin Welby, spoke in the debate. From Hansard:

The Archbishop of Canterbury: My Lords, one of the aspects of being a Bishop in your Lordships’ House is the inherent link to local communities through our dioceses. My own diocese being Canterbury, which covers the eastern end of Kent, I shall start by speaking for a moment about the small picture, about local issues in Kent, as an example that applies in many other places, that would be exacerbated and strained by the impact of a no-deal Brexit which serve as a reminder to us all of the seriousness of the challenges we face should we, perhaps by default rather than design, leave the EU without an agreement.

We have all seen in the media—it has been referred to by the noble Baroness, Lady Smith, and the noble Lord, Lord Newby—the artificially created traffic blip, rather than traffic jam, which was staged on Monday albeit with only 89 vehicles. In the case of this experiment, the reality we face is much worse. The channel ports handle over 10,000 lorries a day, so that 89 represented less than 1% of the flow.

Aside from delivery issues, if there are border delays as a result of no deal, which will of course impact on the rest of the country, in practical terms these lorries will take up an enormous amount of space. Anecdotally, one day’s lorry supply would stretch from Dover to Leicester. Furthermore, if 10,000 lorries are stuck in east Kent daily, 10,000 drivers will need to use the local facilities to eat, drink and go to the bathroom. That will have a major impact on local towns and villages, as was seen during Operation Stack three or four years ago.

Support services will be physically unable to access those in need. That was also our recent experience. If roads are logjammed people will be unable to get to work, small businesses, tourist sites and haulage companies will suffer very severely and go out of business, with an increase in unemployment. The burden on local communities and their infrastructure—

Lord Forsyth of Drumlean: Did the most reverend Primate by chance hear the chief executive of Calais ports on the radio this morning? He said that there was no question of there being any delays at Calais because preparations had been made. Therefore, is it responsible to continue to spread these scare stories?

The Archbishop of Canterbury: My Lords, I did not have the privilege of hearing the chief executive of Calais, but I did have the privilege of talking to the chief executive of Kent County Council, of Canterbury City Council and others involved in small businesses in Kent over the past week—and very significant numbers of them. I take my evidence from our own people in this country, and it is evidence.​

Noble Lords might remember the effects of Operation Stack in 2015 after strikes in Calais disrupted thousands of lorries bound for cross-channel ferries. It cost the local economy £1.5 million a day. It cost the country £250 million a day. Operation Brock, which will supersede Operation Stack, can only cost more. Back in 2015, arterial roads were blocked which had a significant impact on local communities.

as John Donne tells us, and significant disruption in one industry will invariably have a knock-on effect across the community and eventually across the country. This is not Project Fear or projected fear. It is an account of what happened in 2015.

Having spoken to local officials, I have heard time and again that Kent does not currently have the structural capacity to cope with a no-deal Brexit or time to prepare. The last time that customs checks were made for UK/EU trade, in 1993, before the EU single market, there were between 2 million and 2.5 million customs clearance documentation entries. Since 1993, Dover has seen significant increases in freight, and Eurotunnel is also now in operation. Consequently, post Brexit, there could be an estimated 25 million customs clearance documentation entries. Before 1993, 300 customs officers were located in Kent, 125 at Dover. There are now only 24 in east Kent, covering both the port of Dover and Eurotunnel. In 1993, there were 185 customs clearance agents to do the paperwork. Today, there are only 17 and only five of them operate a 24-hours-a-day service.

The transition in the event of no deal may possibly be without difficulty. We are assured by those who support it that it will be, and many of the projections of two years ago have not come to pass. But experience in 2016 and 2015 indicate a very material risk. To take that risk without assured and adequate mitigation is not a moral decision.

That brings me to my second point about moral responsibility. The decision is rightly with Parliament and specifically with the other place, but with parliamentary sovereignty comes responsibility for the welfare of those represented and legislated for. We face not just practical choices but moral decisions alongside our highest responsibility to protect our poorest and most vulnerable. The burden, therefore, must be on those who believe that no deal is a reasonable option to prove that it would not have a significant negative impact on people such as those in the diocese that I serve who already face hardship.

My third point is on the adversarial nature of the process. I spoke a little about this in December with regard to reconciliation. The most serious and visible aspect is the personalised nature of the threats outside the House against Members of the other place especially, whether personally, online or by other means. These threats have rightly united all sides in stating that this is an attack on democracy itself. Our Christian heritage and the heritage of other faiths and non-faith traditions call for us to treat others as we would wish to be treated—the golden rule. Christ himself went on to call for love for enemies. That does not mean the absence of passionate difference but calls for respect for human dignity. That requires active leadership— ​politically and in security against such threats—and it must require now, not after 29 March, examples of reconciliation by public figures who have differed most profoundly during this painful process over the past two or three years. That is leadership.

My final point is on the nature of the decision now. It may not feel like it and we may not wish it but we are still near the beginning of the Brexit journey, not at the end of the process. The decisions made over the next week will not be finalised for all eternity but are a foundation for further discussion and negotiation down the line.

There has to be an agreement in which all accept the need to deliver the “will of the people” that was expressed in the referendum, while also recognising that when it was expressed in such a close result, there is a duty to build in compromise—an inevitability, albeit unwelcome to some.

If not, there will be by default a no-deal Brexit. That outcome would be not only a political and practical failure but a moral one equally as serious as ignoring the result of the referendum entirely.

A second referendum is not my preference but if Parliament fails in the task entrusted to it, then regrettably it may be required. This is about more than Brexit, and Parliament must not show itself unfit for the job.

Parliamentarians must be able to look back at this time and say honestly to the people of this country that we put them, their choices, their welfare and their communities above the politics and ideology that can seem so all-consuming here in Westminster.

As we embrace the challenge, which is hope-filled and exciting, of reimagining our country and its structures over the next few years and months, I hope politicians will take it upon themselves to make these crucial decisions, not only with the grand vision but with the small picture—the effect on local people, communities and businesses—in mind.