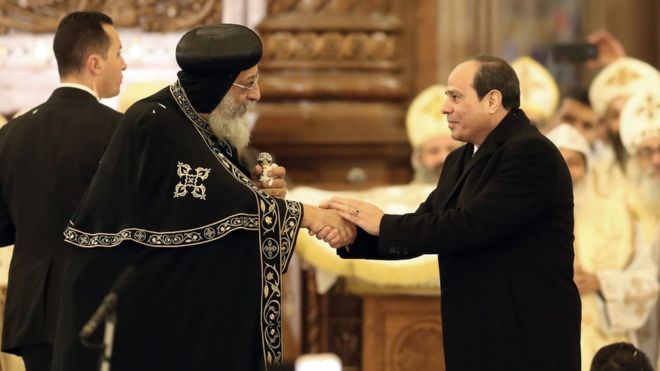 On 6 January, I participated in a truly historic day here in Egypt. President Abdel-Fattah al-Sisi simultaneously inaugurated the largest cathedral in the Middle East and one of the largest mosques in the region in the new Administrative Capital, just east of Cairo. This was a remarkable event, an obvious statement of solidarity, and something which has never happened before. These two buildings, opened on the same day in the same city, will allow Egyptians, both Christian and Muslim, to worship peacefully in their houses of prayer.

It was Christmas Eve for the Orthodox Church, and I attended the midnight mass in the new Cathedral of the Nativity. Large and beautiful, this cathedral was a magnificent place to celebrate Christmas with my Orthodox brothers and sisters. There was a spirit of joy and celebration amongst those in attendance, and I was struck that, in this moment, I was participating in both the present and the future of Egypt at the very same time.

The cathedral (as well as the mosque) was not only opened by President Sisi, it was built with the support and funding of the government. This action, as well as the President’s opening address, are a clear message that he seeks to promote citizenship for all people here. In his opening address he said, “We are one and we will remain one.” He is keen, I can tell, to promote the religious values of peace and love, and for this I have great respect.

They say that actions speak louder than works, and these actions of support give me the feeling that we are restoring the beautiful Egypt in which we once lived. We are one step closer to restoring the tolerant culture that Egypt has known for centuries. Only through loving our neighbors, seeking to understand them, and working together for a better future, will we achieve this beautiful Egypt we once knew.