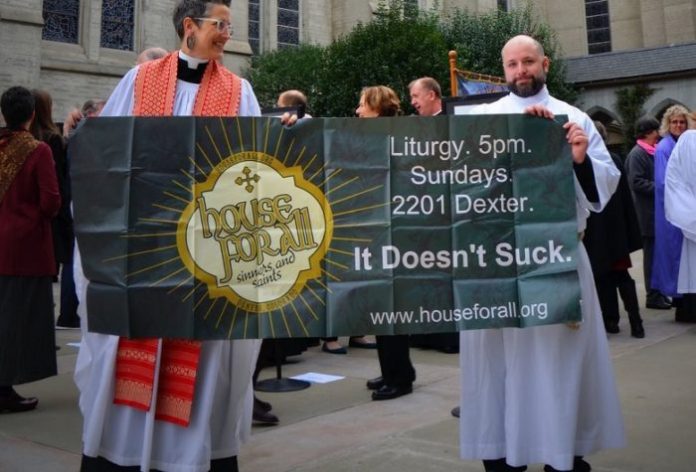 Carina Julig at Religion News Service has a story this week about controversially profane Lutheran pastor Nadia Bolz-Weber departing her Denver church for life as a “Public Theologian.” IRD Evangelical Program Director Chelsen Vicari provides helpful context here. Bolz-Weber is succeeded by an Episcopalian, the Rev. Reagan Humber, as senior pastor at House for All Sinners and Saints (HFASS).

The Episcopal Church and Evangelical Lutheran Church in America (ELCA) have a full-communion agreement for the exchange of clergy between their congregations, so Episcopalians can pastor Lutheran congregations and ELCA pastors can be called as rectors or vicars of Episcopal congregations.

Humber, who came to HFASS from St. Gregory of Nyssa Episcopal Church in San Francisco, is well-equipped to carry on the church’s alternative vibe. His partner is a hair stylist who moonlights as the drag queen Fruitbomb, and Humber is open about his struggles with opiates and alcohol.

One of Fruitbomb’s performances, a lip-sync of Radiohead’s “No Surprises” – in which the drag queen enacts staged abortions – is viewable here on Vimeo:

Humber himself looks to be a bit of a character. Julig’s story features a photo of the Episcopal clergyman wrapped in a metallic chasuble emblazoned with an owl. I’m surprised to have not first run across this on the Tacky Vestments blog. Humber is a product of Graduate Theological Union in Berkeley–a huge red flag–and St. Gregory of Nyssa Episcopal Church, known as a whackadoodle activist parish that selectively appropriates Eastern Orthodox traditions like a buffet line, but also practices open communion for “everyone” regardless of baptism into the Christian faith, apparently also welcoming pets to the holy table.

It’s not as though HFASS has been a bastion of orthodoxy, but many of us have mixed reactions to Bolz-Weber’s work. As Chelsen noted, the ELCA pastor:

Regularly acknowledged sin, humanity’s innate brokenness, the need for confession, forgiveness, and reconciliation, and evil spiritual forces at work in this world. However, it is her unorthodox conclusions on sexual sin, hell, and public support for Planned Parenthood that earn the Religious Left’s admiration.

In short, Bolz-Weber acknowledges the reality of evil and sin, but then claims undermining the sanctity of human life and shedding much of historic Christianity’s moral architecture is not sinful. My colleagues and I found worthwhile content in Bolz-Weber’s Pastrix, but we cringed when she tweeted about making a financial contribution to Planned Parenthood of the Rocky Mountains.

While HFASS reports a “stable” attendance of 190, the church is likely facing a difficult threshold to cross, and it will be worth following to see if Humber can guide HFASS through it, or if the congregation will recede without celebrity Bolz-Weber at the helm.

An attendance figure nearing 200 requires a church to transition from a pastoral model (where the pastor knows everyone) to a programmatic model where responsibilities and relational contacts can be divided among multiple staff members. In the Episcopal Church (and, assumedly, in the ELCA as well) it is difficult to cross this threshold and continue growing. Not only are there pragmatic difficulties, but congregants sometimes push back against growth above this level because it ceases to have a “family” feel where everyone knows everyone else. Fewer than four percent of Episcopal congregations make it to an average Sunday attendance of 300 or greater.

Reading the RNS piece, it sounds like Bolz-Weber realized she would not be able to accomplish this transition well. How Humber fares at HFASS remains to be seen.

Winds of change blowing through the Cathedral of the Advent