The Second District Court of Appeals in Fort Worth has labored long and hard over the appeal taken by the Episcopal Church (USA) and its local diocese and parishes from the July 24, 2015 summary judgment order granted against them by Judge Chupp of the 141st District Court of Tarrant County. In the nearly three years the appellate panel took to decide the case, one of its members died, but the other two soldiered on. Chief Justice Bonnie Sudderth authored the massive, 178-page opinion in the case; the remaining panel member, Associate Justice Gabriel, concurred without writing separately.

(I shall refer to the case here as the “Salazar case” — using the name of its first-listed defendant — in order to distinguish it from the prior Episcopal Church case decided by the Texas Supreme Court in 2013.) As its length indicates, the Salazar opinion is thorough and careful — but alas, length is no guarantee that the Court got it right. Along about page 130, C.J. Sudderth loses her way, goes down an older path that is now discredited, and ends up with a conclusion that contradicts her earlier premises.

Need I add that the chief beneficiary of this judicial wayfaring is none other than ECUSA itself? Since it is likewise the chief architect of all the confusion in church property cases, it may now chalk up one more victim in its systematic campaign to establish itself as a church which no court in the land may touch. It confuses courts by bombarding them with reams and reams of religious and historical documents — the Court in this case mentions (p. 41, n.41) that the record contains over 14,000 pages — which it then proceeds to distort and misconstrue, using technical ecclesiastical concepts with which the secular courts are largely unfamiliar.

In this case, C.J. Sudderth went to the extreme of diagramming a “decision tree” to assist her in finding her way through the forests of legal argument, fustian and mostly irrelevant documents. One version of the tree appears on page 103 of her opinion; a later one is at page 159.  Using either one, the careful reader can see at a glance where the court takes its misstep. From the one on page 103: 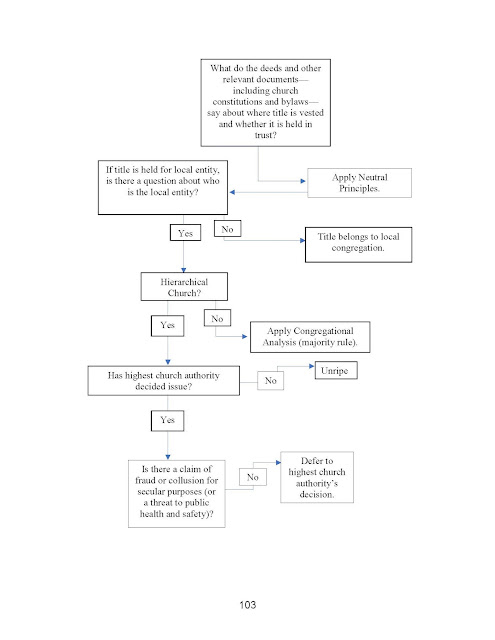 The road map flashes yellow at the node “Hierarchical Church?”; a “yes” answer leads to the next (and highly misleading) node — “Has highest church authority decided issue?”  Once the “yes” box is again chosen as the exit, the path is determined, and the erroneous conclusion (“Defer to highest church authority’s decision”) is unavoidable.

A regular reader of this column should know by now of the church-property-law parameter called “neutral principles.” The Court’s decision tree acknowledges that Texas follows neutral principles in deciding church property disputes (see the very second node at the top of the tree).

But by introducing and then opposing the terms “hierarchical” and “congregational” (see the lower middle of the tree), the Court actually jettisons “neutral principles” in favor of harking back to the 19th-century model of Watson v. Jones (1872), by which one “defers” to hierarchical churches, and follows majority rule in congregational ones.  By definition, a court that chooses to defer in its judgment to that of just one particular kind of church, but not to other kinds, is not applying “neutral” principles.

In other words, a court cannot say with one breath that it follows neutral principles, and then with the next say that it has to defer to the highest tribunal in a so-called hierarchical church. If you would like to read an excellently reasoned exposition of why this is so, go no farther than this short amicus brief filed last week on behalf of 18 law school professors in support of the petition brought by the Rt. Rev. Mark Lawrence and his Diocese of South Carolina before the United States Supreme Court. (You may choose to read the whole brief, but the argument I am talking about begins on page 9 and runs to page 15.)

Let us now see how this unfortunate departure from neutral principles lands the Second District Court of Appeals in a welter of contradictions.

After reviewing the history of church property cases in the United States Supreme Court, and fleshing out what that Court meant by the term “neutral principles”, the Texas Court of Appeals then focused on its own Supreme Court’s recent decision in Masterson v. Diocese of Northwest Texas (Tex. 2013) 422 S.W.3d 594 as instructing how neutral principles of law are used to resolve church property disputes in Texas. It set out the following concise summary of Masterson’s holdings (pp. 78-79):

These propositions are all correct statements of Texas law as expounded in Masterson. Followed correctly, they should have led to a correct decision in the Fort Worth case. Instead, look where the Salazar court ended up:

Despite repeating (at p. 171) the first paragraph from Masterson just quoted, and despite holding (ibid.) that “[a]s nothing in the Corporation’s [articles and bylaws] provides for TEC’s approval and nothing in our law precludes the amendments [to the articles and bylaws by the trustees of the Corporation] to exclude references to TEC, TEC lacks standing for a claim as to the Corporation,” the Court nevertheless concludes that it is the TEC group, and not Bishop Iker and his trustees, who must be given control of the diocesan Corporation.

Despite acknowledging that the trustees of Bishop Iker’s diocesan Corporation had full power and authority to amend that Corporation’s articles in 2006, before the diocese disaffiliated from ECUSA in 2008, the Court found that the latter vote automatically disqualified Bishop Iker and his trustees from continuing to hold office in the Corporation!

The schism gave rise to two distinct entities: one recognized by TEC as the Episcopal Diocese of Fort Worth and one self-identified by Appellees as such. The bylaws and articles do not provide a description of the characteristics of the diocese self-identified by Appellees, but they do require that elected trustees be either lay persons in good standing of a parish or mission, or canonically resident, in the entity identified by the Corporation’s board as “the body now known as the Episcopal Diocese of Fort Worth.” [Emphasis added.] As set out above, it is within TEC’s province to identify its diocese in the geographic area identified as Fort Worth and what it takes to be a member in good standing or canonically resident therein. Accordingly, on November 15, 2008, when Appellees voted to disaffiliate, it was TEC’s prerogative to determine whether the board members of the diocese formerly associated with TEC had become disqualified under the Corporation’s bylaws.

It simply does not logically follow that if ECUSA (what the court calls “TEC”) had no ability to change the officers or amend the bylaws or articles of the Diocesan Corporation, it nevertheless had the metaphysical ability to “disqualify” — retroactively! — those officers once the Diocese had voted to disaffiliate and separate themselves from ECUSA’s jurisdiction.

The Court fails to trace the secular, legal existence of the entities involved. As it acknowledges, prior to the vote to disaffiliate, there was only one diocesan Corporation. But that is equally true immediately after the vote to disaffiliate! There were not automatically two Corporations thus brought into legal existence by the vote to disaffiliate — the second one had first to be legally formed by the ECUSA dissenters under Texas law and then file papers to incorporate, i.e., to be recognized as a corporate entity in the eyes of the State of Texas. That process took several months — and only then was there a separate entity which ECUSA was capable of “recognizing” as its own “Diocese of Fort Worth.”

The second entity not only began its existence long after the first; it also had entirely new offices at a new physical address, new telephone numbers, new officers and directors, as well as a new interim bishop; and a very different set of governing documents when compared to the original Corporation.

Thus the Court engages in a metaphysical sleight of hand when it purports to give ECUSA (and only because it is a “hierarchical” church, remember) the ability to usurp and take over the governance of Bishop Iker’s Corporation, in a fashion wholly at odds with the Masterson decision.

To demonstrate the folly of the Court’s illogic, one has only to ask this question: So ECUSA and its Fort Worth group now get to move into the offices and take over all the property belonging to Bishop Iker’s Corporation? Well, what becomes of the new corporation that ECUSA had formed following the disaffiliation of the old one? Bishop Iker can scarcely succeed to that corporation — does it just lie forever dormant and vacant? And does Bishop Iker now have to organize a third corporation under Texas law? This is the kind of nonsense that flows from a failure to keep a proper track of the various legal entities, all the while supposedly “deferring” to the actions of a body that will twist and turn the law to any degree necessary to serve its own greedily chomping maw, swallowing up all the church real property it can see around it, whether it has use for it or not.

To labor so long, and to come out with such a mockery of neutral principles — the Texas Court of Appeals has put its name to a genuine travesty of justice. Bishop Iker and his attorneys are not about to let this result stand. Meanwhile, we can all pray for the inwardly collapsing Episcopal Church — falling in on its very substance as, like some sort of dying ecclesiastical nova, it expels and consumes all that had kept it functioning until this century. May it come to its senses, and stop all this legal manipulation, misdirection and misguidance of the secular courts to gain what is at best a short-term, and eventually suicidal, advantage.

Call for proposals for a new reliquary to house...

Statement by the GSFA re the ‘Pilgrimage of Peace’...

Church Divinity School of the Pacific to end residential...

Bishop David Urquhart to be the new Bishop to...

Bishop of Coventry reports member of General Synod to...