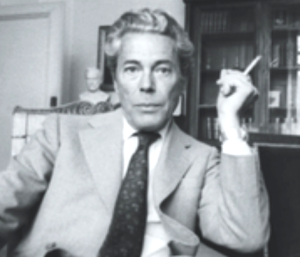 Allan Haley looks at the life of Jacques Monod, and the question of purpose and meaning in life

Jacques Monod was a brilliant microbiologist, one who was present at the very beginning of the explorations that led to the discovery of the role that genes play in the development and evolution of life. Along with his coworkers, he was awarded the Nobel Prize in 1965 for physiology / medicine on account of their elaboration of the mechanisms by which genes are either expressed or repressed in the course of an organism’s development.

As detailed in this biography, he was a fierce partisan during the years of the Vichy government’s betrayal of France, and played a leading role in the forces of the Resistance movement — at considerable risk to his own life.

The same book chronicles his lifelong friendship with another Resistance supporter, the Algerian-born Albert Camus, who clandestinely inspired his countrymen through his uplifting editorials published, despite numerous Nazi attempts at suppression, in an underground journal of the French resistance during World War II, called Combat.

Camus and Monod shared in common a philosophy of resistance during a period of of unparalleled oppression. A great number of their colleagues suffered torture and death at the hands of the Nazis, who practiced extreme means of repression based largely upon arbitrary and anonymous sources of information. The Nazis would presume that anyone caught in a compromised situation was deserving of punishment — mostly summary execution. That stance in return produced a fatalism in the forces of the Resistance that led them to take extreme risks, despite the individual costs to their lives.

Having lived through these arbitrary horrors of invasion, resistance and retaliation at first hand, Monod and Camus came to espouse a philosophy which derived from the existentialism of Jean-Paul Sartre, but which added an element of heroic resistance to the indifferent forces of evil which the latter’s philosophy neither explained nor judged. Camus expressed it in this fashion in an editorial he wrote for the underground newspaper Combat on the eve of the day that the Germans surrendered Paris to the invading Allied forces:

Nothing is given to mankind, and what little men can conquer must be paid for with unjust deaths. But man’s grandeur lies elsewhere, in his decision to rise above his condition. And if his condition is unjust, he has only one way to overcome it, which is to be just himself. Our truth tonight [August 24, 1944], the truth that hovers in the August sky, is in fact man’s consolation. What gives our heart peace, as it gave peace to our dead comrades, is that we can say before the impending victory, without scolding and without pressing any claim of our own, ‘We did what had to be done.’

Despite their agreed condemnation of the evils generated by Hitler’s Nazism, neither Camus nor Monod had any recourse to Christianity in the responses they undertook. For both of them, life was the product of chance forces that happened to result in reproductive success, without any need for the intervention of a divine mover. As the random outcome of an indeterminate beginning, life had no inherent claim to happiness — still less any immunity against the forces of evil, which were just as random. Life came by chance alone into the universe in which it found itself, and it was likewise all alone in dealing with whatever it encountered.

Monod’s signature work, called (in English) Chance and Necessity, summed up his philosophy: life began on earth by random assembly, over time, of its essential components. Once those were in place, life progressed by the preordained laws of physics, i.e., by necessity. In the face of such an inhuman origin, humans themselves had no claim to any special status. The best they could do was to live out their allotted times in vigorous affirmance of the good that they could manage to discover and enjoy, and in equally determined resistance to the evil that inevitably they would encounter along the way.

Life, in short, for both Camus and Monod, was a one-shot experience, which in the end amounted to nothing other than what the individual could manage to salvage from it through heroic acts of resistance to evil, and support and affirmation of anything that was good. If the situation called for self-sacrifice, so be it, but there was no hope of any reward beyond; to believe that was to subscribe to fairy tales.

There is thus an inherent self-contradiction in the existentialist philosophy as lived by both Camus and Sartre. Noble, self-sacrificing deeds are to be praised and admired, but only by one’s fellow humans, who will soon pass out of existence — along with any human memory of those noble deeds. So why admire them, if in the end they will count for nothing? For Camus and (probably also, although not expressly) for Monod, this was the great paradox of existence: life counted for nothing, except what the individual made of it — and even then, no matter what the individual did, it still came to nothing.

As Camus said of a character in his novel The Stranger, Meursault laid his “heart open to the benign indifference of the universe.” Likewise, the eternally tormented Sisyphus (in The Myth of Sisyphus) was one to whom “this universe without a master seems . . . neither sterile nor futile.”  And for Monod, despite our existence in a world enlightened by the discoveries of science, there is no outside source of meanings or values: “[man] alone creates, determines and shapes them.”

All his professional life, Jacques Monod worked at the Pasteur Institute in Paris, and his great achievements reflected back on that noble institution, founded by the great Louis Pasteur himself. Toward the end of his life, he assumed its directorship, and strove to advance the goals he believed that Pasteur embodied, as he laid them out in a speech celebrating Pasteur’s 150th birthday in 1973:

Where does genius come from? Often we are contented with attributing it to a unique, exceptional, and mysterious resource of mind. On the contrary, in the case of Pasteur, we see clearly that the power of his genius comes from multiple sources . . . . He was ambitious and dominating and would be satisfied only with real and complete victories.  He was rigorous and demanding toward himself. At the same time he would spare no efforts to be severe and disciplined.

Monod could have applied these same words to some of his colleagues in the French Resistance. They definitely defined his outlook on life, and led to his lifelong friendship with Camus.

What is missing in all this description of the lives of Monod and Camus is any element of the Catholic religion, which was omnipresent in France before the Second World War, but whose respect and prestige suffered greatly as a result of the tribulations to which the French were subjected during the Nazi occupation and collaboration, thanks to the betrayal of the country by its most respected leaders. Both Camus and Monod were staunchly agnostic, if not atheist, and their wartime experiences with Nazi brutality served only to strengthen their resistance to religion of any kind.  For Monod, the scientist who believed that all life resulted from chance, God was an entirely unnecessary hypothesis.

The result was that both Camus and Monod developed their philosophies as limited to what man could accomplish alone. God was neither a help nor a comfort in all the afflictions they went through in the 1940s. Rather, He was a useless fabrication handed down by earlier generations — a fantasy in which no rational person of their age could put any trust. Indeed, the very brutality of the war itself was evidence against the existence of a benign Creator God, who could allow such bestiality to occur.

Albert Camus died in an unfortunate automobile accident on his way back to Paris in January 1960. No one witnessed his death, which was instantaneous. But Jacques Monod, following the death of his wife and lifelong love Odette from cancer in 1972, died himself in a hospital in Cannes in May 1976, with his brother and cardiologist in attendance. The author of Brave Genius interviewed those to whom Monod’s brother related his last words, and reported:

I have looked up a number of accounts of Monod’s death on the Internet, of which this one is typical. Significantly, while all recount his statement “I am trying to understand”, none of the online accounts mentions his addressing two of the most important individuals in his life just before he uttered those last words. Considered in context, they amount to a touching description of one who was taken by pleasant surprise to learn just what one encounters after death.

Odette and Jacques Monod married in 1938; she bore him two sons, and they were married for 34 years. She was Jewish, and he had to hide her from the Germans under a disguised identity; while away on Resistance business, he wrote to her almost every day.

Louis Pasteur, on the other hand, had died in 1895, fifteen years before Monod was born. Yet Monod’s lifelong association with the Pasteur Institute, and his succession to its directorship, is a sufficient basis upon which to surmise that he closely identified with that archetypal figure of French science.

It is thus tellingly significant that as the proudly agnostic Monod drew his last breaths, he appeared to be comforted (indeed, welcomed?) by two of the figures most important to him, who had preceded him in death.

The book Brave Genius was a stimulating account of two intertwined lives that rose above the desultory circumstances into which they were born. I was thus pained to read how Monod and Camus each prided himself on his reliance on nothing more substantial than puny, solitary man, and did his level best to make do with that restricted philosophy. Notwithstanding their own imposed self-handicap, they led heroic lives, in which each was prepared to sacrifice all so that the Resistance to which they belonged could survive to fight the evil forces that occupied their country.

I am hopeful that the account of Monod’s last moments evidences a greater reality than either of them ever suspected or imagined while alive, but to which instinctively they gave their unknowing best here on earth.