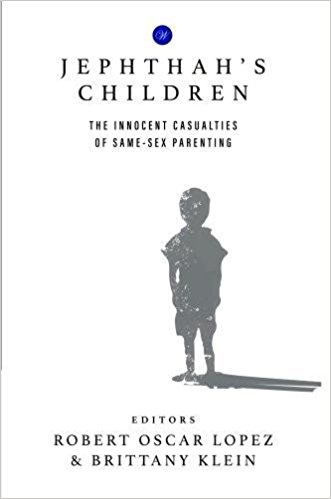 Jules Gomes reports on findings published in Jephthah’s Children that the rosy picture painted by gay activists and adoption is not true.

Hollywood did not invent the genre of horror. If you want to read a really grotesque horror story turn to the biblical Book of Judges and read the story of a judge named Jephthah, who is a bastard born of a whore. We do not know if Jephthah has a wife, but he has a daughter. Jephthah may have adopted her after kidnapping her from a village he raided.

The story climaxes with Jephthah vowing to sacrifice whoever comes forth from the doors of his house to meet him, should God grant him victory over Israel’s enemies. Israel wins. Jephthah returns home and watches with horror as his daughter emerges from his house to welcome him.

Jephthah is the antithesis of a parent: he sacrifices an innocent child to placate his perverse beliefs. Parents sacrifice their ambitions and desires for their sake of their children. Jephthah sacrifices his child to satisfy his vainglorious ambitions and selfish desires. You could say the Jephthah syndrome defines the modern approach to child-rearing.

Dr Spock’s revolution has proved to be short-lived. His ideas about childcare – persuading parents to be more flexible, responsive and affectionate with their children – no longer hold sway. Today children’s needs come a definite second to parents’ rights either to have them or to offload them. Mention Dr Bowlby’s groundbreaking research on the baby’s prior need for maternal attachment and expect to be told that a baby is capable of multiple attachments and substitute figures will do.

The evidence of the impact of maternal deprivation on babies has not changed – indeed findings mount on anxiety and heightened cortisol levels – but ideology about women’s rights has. The logic of feminism, that children’s needs can be subordinated to adult rights, is obvious. Once it is OK for daycare or fathers to substitute for mothers, so it becomes OK for anyone, regardless of whether or not they, as individuals,  are indeed the best substitute (often granny) that can be found, in terms of meeting the child’s needs.

Children raised by same-sex couples are now comparing their experience of gay adoption to Jephthah’s story in the recent study Jephthah’s Children: The Innocent Casualties of Same-Sex Parenting. Their revelations would have been deserving of attention even had not the tragedy of toddler Elsie, who was taken away from her family by social services, given to a gay couple for adoption and murdered by one of her adoptive dad, Matthew Scully-Hicks, hit the headlines.

Jephthah’s daughter was an adult when she fulfilled her father’s bizarre vow. Elsie was 18 months old when she died from Scully-Hicks’s abuse resulting in broken ribs, a broken leg, bleeding on the brain and a fractured skull. Jephthah ‘tore his clothes’ with penitence when he saw the consequences of his behaviour. Remorseless Scully-Hicks referred to Elsie as ‘Satan dressed up in a Babygro.’

The Book of Judges condemns Jephthah’s behaviour and his society in the refrain, ‘In those days there was no king in Israel. Everyone did what was right in his own eyes.’ Social services and judges in our society commend gay adoption as a matter of gay rights and not as a response to children’s needs.

Social services, so reluctant to remove Elsie from Scully-Hicks, did not hesitate in the case of a Christian heterosexual couple, Vincent and Pauline Matherick, who had fostered 28 children. Officials took from them an 11-year-old boy the couple were fostering because they’d refused to teach him about homosexuality. But in Elsie’s case, social workers were terrified of questioning the dominant orthodoxy that same-sex couples make equally good or better parents.

This myth is based on ‘fake research’. Nevertheless, it is a fiction that is leading to a boom in gay adoption, which has increased ever since it was allowed in Labour’s 2002 Adoption Act. Numbers have risen further since same-sex marriage was introduced in England and Wales in 2014. Same-sex couples now make up a record one in seven of the total approved to adopt children. Meanwhile, adoption by heterosexual couples has dropped 12 per cent this year.

In 2014, Simon Crouch, himself a gay parent, conducted a landmark study at the University of Melbourne influencing policy on gay adoption. The Washington Post sensationalised the study, declaring that ‘children of same-sex couples are happier and healthier than peers’. Crouch claimed that his study on 315 mostly lesbian couples was the largest of its kind, despite serious methodological flaws including using a self-selected ‘convenience sample’ where the respondents knew the purpose of the survey, and thus the political and social importance of the results, before they were asked to participate.

By contrast, researchers Robert Oscar Lopez and Brittany Klein, editors of Jephthah’s Children, draw on the first-hand experiences of scores of children (now adults) who were adopted by gay couples.

Lopez, who was gay and is now married to a woman, narrates his upbringing by two lesbians. ‘We hear that gay couples have loving homes and they love their children,’ he writes. ‘I don’t buy that because I think love means you sacrifice for the other person rather than expect the other person to sacrifice for you. If you are gay and love a child, you either sacrifice your gayness and raise the child in a home with both mother and father, or you sacrifice your dream of parenthood so the child can be adopted by a home with a mother and father.’

Children adopted by gay couples are raised in a culture that is ‘highly specific and fraught with problems,’ he writes, where ‘adults have higher rates of depression, anxiety, eating disorders, sexually transmitted diseases including HIV/AIDS, domestic violence, sexual assault, and suicidal ideation’. He calls gay adoption ‘systematic child abuse’.

Klein, who was also brought up by a lesbian couple, tackles the thorny issue of gays and surrogacy. ‘How did parenthood become a right?’ she asks. ‘This is not about what goes on between two adults. This is a whole country becoming complicit in making women breeder livestock to meet the whims of a group of men and then denying children created as saleable goods the basic right to a mother and father . . . A child deserves a mother and a father. This is a basic human right. Parenthood is not a right . . . No homophobia in the world even competes with this socially accepted dehumanisation of children.’

Advocates for gay parenting are creating a system where children belong to adults who want them, not adults who conceived them, the researchers argue.

Klein is begging society to listen to today’s Jephthah’s daughters and sons. ‘There are many of us out in the world. Our parents used us as little display objects. We existed only to make our parents look good – living, breathing political statements. We existed to feed the insatiable egos that were our parents. Does that sound like a happy childhood?’

As a researcher she puts her finger on a raw methodological nerve. ‘Don’t ask the six-year-old if she or he is happy. The toddlers have been trained to speak like a pet bird. They live in fear of what a parent will do if they dare to make the parent look bad. Don’t go by the dog and pony show at the Pride Parade. Ask us, those of us who broke away from the culture that we grew up in. We will tell you.’

Academic research must start to reconsider the children just as John Bowlby did when he brought attention to the long-term effect on children of separation anxiety – from his study of children brutally separated them from their natural parents during the war.

Klein writes: ‘History will be a harsh taskmaster. Children grow up. Trendy social causes are often revealed as bad ideas. I can say honestly that I don’t know a single one of us – those raised in gay and lesbian households – who is going to tell you they have had anything even remotely related to a happy childhood. How could we? We were just pawns. We existed only as a mirror, and there were not enough mirrors in the world to satisfy them.’

Homosexual parenting is not a matter of right. Nor is being a parent a right. It is a gift and a duty. But as in the days of the Book of Judges, there are no moral absolutes in our society today. Everyone does and can do what is right in his or her own eyes. Elsie is dead. Jephthah lives on. And that is wrong.

First printed in The Conservative Woman