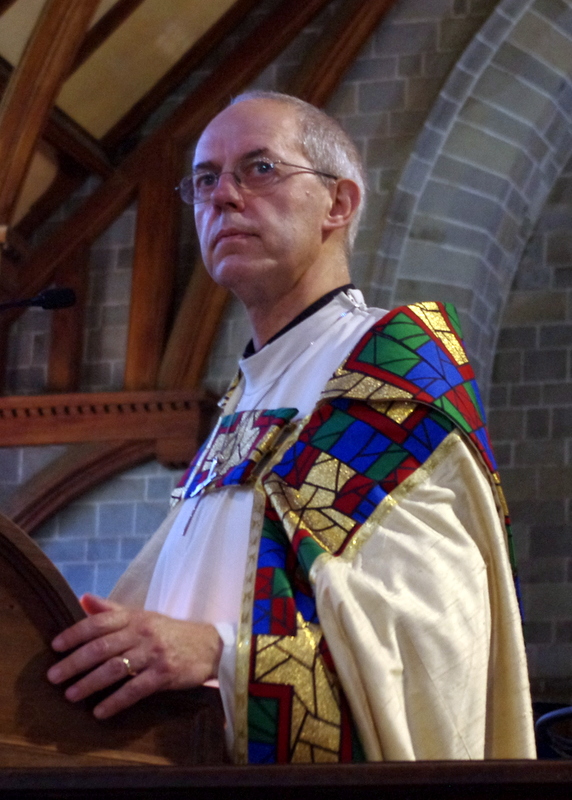 The Most Rev. Justin Portal Welby, Primate of All England and Archbishop of Canterbury

Archbishop Justin Welby was born on 6 January 1956 in London, the son Gavin Welby and Jane (née Portal). His parents separated in 1959 and his mother remarried in 1975. He was educated at St Peter’s School, Seaford, and Eton College. He matriculated at Trinity College, Cambridge, where he received a Bachelor of Arts degree in history and law in 1978. He worked in private industry for 11 years after university, and from 1989 to 1992 trained for the ministry at priesthood at Cranmer Hall and St John’s College, Durham, where he was awarded a Bachelor of Arts degree and a Diploma in Ministry in 1992. He served his curacy at at Chilvers Coton and St Mary the Virgin, Astley from 1992 to 1995. He then became rector of St James’ Church, Southam, and later vicar of St Michael and All Angels, Ufton, in the Diocese of Coventry from 1995 to 2002. In 2002, Archbishop Welby was appointed a canon residentiary of Coventry Cathedral and the co-director for international ministry at the International Centre for Reconciliation. In 2005, he was appointed sub-dean and Canon for Reconciliation Ministry. On 8 December 2007 he was installed as Dean of Liverpool Cathedral. In 2011 he was appointed Bishop of Durham and was consecrated at York Minster on 28 October 2011. On 9 November 2012 the Prime Minister’s Office announced that he had been appointed 105th Archbishop of Canterbury in succession to Archbishop Rowan Williams. He was enthroned as Primate of All England and Archbishop on 21 March 2013. He is married to Caroline (née Eaton) and they have six children, one of whom has predeceased them.