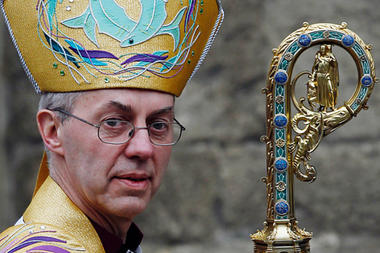 The Church of England may be doomed, British commentator “Pageantmaster” writes, as it begins debate over the Pilling Report. Hampered by several generations of poor leadership, with bishops chosen for their ability to go along and get along, the Church of England may well surrender the fight in the battle with post-modern culture.

Pageantmaster, a UK-based church commentator well known to Anglican Ink, has penned an evaluation of the situation within the inner councils of the Church of England – and it is not a pretty sight.

Shortly before last week’s meeting of the House of Bishops of the Church of England, he wrote the fix was in:

The House of Bishops or its managers under Rowan Williams decided several years as part of its gradual liberalising that it was going to start a process of moving the Church of England on its traditional understanding of sexuality and the Bible’s teaching.  Sir Joseph Pilling was called on to chair a committee to look into it, not originally with as wide a remit as it has since assumed.

The membership of the committee was announced and the senior diocesan was deliberately named as the liberal thug, the Bishop of Gloucester, an articulate and bullying debater and behind many of the moves to liberalise the church in his role as President of Affirming Catholicism.

Perham is something of a power broker and was on the CNC which chose Justin Welby as Archbishop of Canterbury.  Perham is deeply involved in Continuing Indaba and wrote of his Indaba with the TEC Bishop of El Camino Real and the Bishop of Western Tanganyika:

“We hope Indaba will be expanded within the Anglican Communion; we hope the Indaba model can be shared beyond our Communion to the wider church; we hope our continuing partnership can be a significant part of that work,” he said.

Perham is for full inclusion and gay blessings in church, if not marriage. Perham, who admits to being a liberal and modern Bishop, said: “The church has to be sorry,” he said.

“It has not treated the gay, lesbian and transgender community very well. “The church may be moving slowly, but it will get there. The vast majority of Christians are moving relatively fast towards a more modern way of thinking and towards a position where they should be. It is a place where they should have reached a long time ago, but clearly not as quickly as the rest of society. The church is slow because it is trying to pull together this universal family from all over the world to have the same understanding.”

“The church’s view on same sex marriage is not sustainable. But homosexuals must realise that the church is not homophobic. We should all celebrate committed, faithful and loving relationships.”

Perham made sure that Pilling delivered exactly what was intended.  Together with the institutional and recently retired Freemason, Jonathan Baker, the flying Bishop of Fulham, with the assistance of Ms Trewick, it is pretty clear that good faithful suffragan, Keith Sinclair, Bishop of Birkenhead was in line to be rolled over – except that Bishop Keith wasn’t.

The one outstanding feature of Pilling is Bishop Keith’s wonderful defence of Scripture and the teaching of both the Church and the Communion.  He was not going to be silenced by the Establishment stooges.

Then we come to Indaba, Facilitated Conversations, and Justin Welby. I could go through the election of Justin Welby, the votes of Perham and Barry Morgan and the rest, the background at bribe-giving French firm Elf, and the treasurer position at Enterprise Oil which bombed after financial mismanagement.

Then there was the role as a facilitator at the Dublin Primates meeting, the question marks about Liverpool and the connections made in Bishop Jones’ early Indaba on sexuality in the diocese, the links with Virginia Theological Seminary, the skill with psychological warfare techniques used at Dublin, at Coventry with Tory Baucum and Shannon Johnston, the undermining of Holy Trinity Brompton — perhaps the biggest potential casualty with a worldwide impact — a mission with so much promise, and yet through hubris and pride now at risk.

Then the rejection by Synod a few years ago of the attempt by Rowan Williams to bring in his suffragan +Dover as chair of the business committee and introduce Indaba to Synod, and the subsequent roll out of Indaba in Synod last July and this February by Welby and Porter, the control freakery run mad at Synod this year, the control at Lambeth Palace by gay activists, liberal press people and dodgy reconciliation practitioners, the lies, lies, lies – about being a conservative evangelical, about why he went to Kenya, the lies of Arun Arora and William Fittall they were instructed to tell when the truth threatened to come out and derail the women bishops vote, notwithstanding that the Pilling Report document was prepared on 20th November, just as the vote was going on.

Then the hectoring of young gentle and loving Christians for ‘homophobia’, probably the last group where you would find it, the opening of CofE Schools to materials prepared by gay activists not only to fight homophobic bullying but to push an unbiblical agenda, the sly and suggestive comments about how challenged he is, the dishonesty, the manipulation, the ‘reconciliation’, the Continuing Indaba and the lack of clarity about which US source is funding it.

I could go on about that, but that is to talk about the person and the fragile personality and the flakey theology, whereas this whole issue is not about personality but instead about policy and about plans laid down long ago, long before Welby became ABC, and long before he accepted the brief which came with the job, and based on which he was appointed.

This is about cold, manipulative engineering, to take apart a Christian denomination, the third largest in the world, by taking out the heart of its administrative structures and subvert its founding church, following just the same plan.

It is about the intention all along to have ‘facilitated conversations’ in the Church of England controlled by ‘Canon’ David Porter and Justin Welby to a plan from Coventry, and about the plans not far behind that to roll them out in the Communion.  It is about the cold hard determination to do whatever it takes, whatever the cost, whatever the promises broken and lies which need to be told, the gongs given to African bishops and the bribery to assist the agenda.

Nothing will be allowed to get in the way, and those persuaded that we are just having a ‘conversation’ just need to note the way TEC was undermined using the same game plan.  Justin under the guise of a sheep has got away with things Rowan never could have.

No that is the plan, and what unless the Evangelical Bishops are prepared to stand up and those others who are concerned, then that is what we are headed for – funded by TEC, organised with materials from US organisations used for the first Continuing Indaba -both in the CofE and the Communion.

It is a high risk policy.  Certainly in the Global South the game has been rumbled, and it will break apart the Church of England.

How do I know it will break apart the Church of England?  I have been watching it happen this week and reading peoples’ blogs as they explain what they are doing as they start to divide – including many who are in between.  I grieve for that.  It is heartbreaking.

Hubris, Disobedience, Deception – the Father of Lies is hard at work.

However, God is in charge, and I have seen Him move in power in answer to prayer in ways I could never have imagined, so please join me in prayer.  Your will be done, O Lord.

2 John 1:1-11 1 The elder, To the lady chosen by God and to her children, whom I love in the truth—and not I only, but also all who know the truth— 2 because of the truth, which lives in us and will be with us forever: 3 Grace, mercy and peace from God the Father and from Jesus Christ, the Father’s Son, will be with us in truth and love.

4 It has given me great joy to find some of your children walking in the truth, just as the Father commanded us. 5 And now, dear lady, I am not writing you a new command but one we have had from the beginning. I ask that we love one another. 6 And this is love: that we walk in obedience to his commands. As you have heard from the beginning, his command is that you walk in love.

7 I say this because many deceivers, who do not acknowledge Jesus Christ as coming in the flesh, have gone out into the world. Any such person is the deceiver and the antichrist. 8 Watch out that you do not lose what we[a] have worked for, but that you may be rewarded fully. 9 Anyone who runs ahead and does not continue in the teaching of Christ does not have God; whoever continues in the teaching has both the Father and the Son. 10 If anyone comes to you and does not bring this teaching, do not take them into your house or welcome them. 11 Anyone who welcomes them shares in their wicked work.