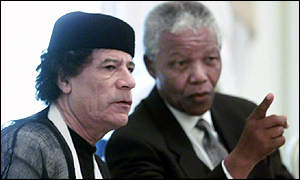 I disagree with my Archbishop. For a year or so Nelson Mandela actively contemplated and setup an organisation to conduct acts of terror. Although whilst he was at liberty MK didn’t kill any innocent people, the charter that he wrote clearly had in mind the kinds of bombings of innocents that happened in the 1980s after he was imprisoned.

Here’s what he signed:

——
“At the beginning of June 1961, after a long and anxious assessment of the South African situation, I, and some colleagues, came to the conclusion that as violence in this country was inevitable, it would be unrealistic and wrong for African leaders to continue preaching peace and non-violence at a time when the government met our peaceful demands with force.

This conclusion was not easily arrived at. It was only when all else had failed, when all channels of peaceful protest had been barred to us, that the decision was made to embark on violent forms of political struggle, and to form Umkhonto we Sizwe. We did so not because we desired such a course, but solely because the government had left us with no other choice. In the Manifesto of Umkhonto published on 16 December 1961, which is exhibit AD, we said:

‘The time comes in the life of any nation when there remain only two choices – submit or fight. That time has now come to South Africa. We shall not submit and we have no choice but to hit back by all means in our power in defence of our people, our future, and our freedom.’
Firstly, we believed that as a result of Government policy, violence by the African people had become inevitable, and that unless responsible leadership was given to canalise and control the feelings of our people, there would be outbreaks of terrorism which would produce an intensity of bitterness and hostility between the various races of this country which is not produced even by war. Secondly, we felt that without violence there would be no way open to the African people to succeed in their struggle against the principle of white supremacy. All lawful modes of expressing opposition to this principle had been closed by legislation, and we were placed in a position in which we had either to accept a permanent state of inferiority, or take over the Government. We chose to defy the law. We first broke the law in a way which avoided any recourse to violence; when this form was legislated against, and then the Government resorted to a show of force to crush opposition to its policies, only then did we decide to answer with violence”
—–

And I don’t write this to “have a go” at Mandela. I write this to point out the change in the man from advocating violence (and even murder) to achieve his otherwise just political aims to then talking a view that only non-violent reconciliation could achieve the kind of future South Africa needed and deserved.

Pointing out that Mandela *was* a terrorist in the 60s in all meaningful senses of the word only amplifies what he achieved in the 90s through rejecting that route to changing the county he loved so much.