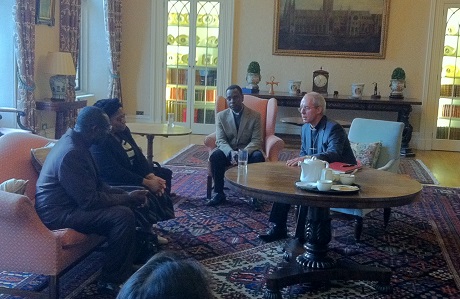 The Archbishop of Canterbury has said that he was ‘moved to tears’ to welcome recently-released Nigerian archbishop Ignatius Kattey and his wife, Mrs Beatrice Kattey, to Lambeth Palace yesterday.

The Most Rev Ignatius Kattey, who is Dean and Archbishop of the Niger Delta Province, and Mrs Kattey were kidnapped on 6 September near their residence in the southern city of Port Harcourt. Mrs Kattey was released a few hours later, but Archbishop Kattey was held for more than a week.

Lambeth Palace staff lined the main staircase to applaud Archbishop and Mrs Kattey when they visited yesterday morning. They were accompanied their daughter, Josephine; Archdeacon John Chukwuemeka Adubasim, from the Diocese of Niger Delta North, who is on a study visit to the Diocese of Guildford; and Canon Ben Enwuchola, Chaplain to the Nigerian Congregation in London. They had tea with Archbishop Justin and then joined Lambeth Palace staff for Eucharist in the chapel, followed by lunch.

Speaking after the visit, Archbishop Justin said: “I was moved to tears to be able to welcome Archbishop Kattey and Mrs Kattey to Lambeth Palace after their ordeal, and to share Communion with us and all the staff. We rejoice at the love and grace of God which has renewed them in their freedom.”

Archbishop Kattey said yesterday that he had come to Lambeth Palace to thank Archbishop Justin for calling on the church to pray for his release, and to express his thanks to those in the Church of England and the Anglican Communion for their prayers. “They prove that God answers prayers,” he said.