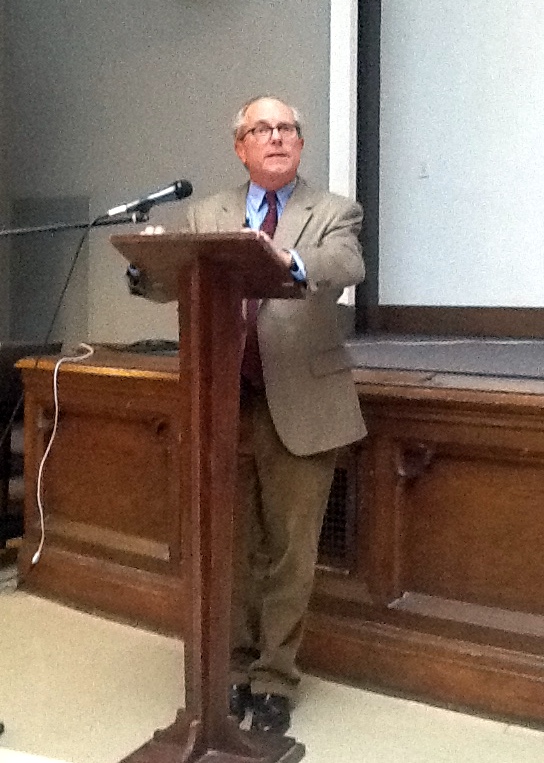 Toronto: Conservatives should seek terms for a negotiated peace to the Anglican wars, the Rev. Canon Christopher Seitz, Old Testament Scholar and Senior Research Professor at Wycliffe College in the University of Toronto and a leader of the Anglican Communion Institute told a conference marking the 50th Anniversary of the 1963 Toronto Pan-Anglican Congress.

The battle had been lost leaving conservatives as “strangers in their own church,” he said on 18 Sept 2013, and “the question for conservatives [now] is about encouragement. Will we be allowed to walk the well-worn paths of the faith,” he asked “or must we follow the trailblazers?”

While engaged in the preparation of a commentary on the Book of Jeremiah while on a study leave at the University of Goettingen, Prof. Seitz stated it was his custom to tread the paths in the forests surrounding the town.  Warming upon this theme, he told the conference participants gathered at St Paul’s Bloor Street in Toronto that traditionalists are being told the “paths of our fathers are wrong paths” and our understanding of God’s plan for salvation has reached its “sell-by date.”

Conservatives are being told they “must rewrite the maps and follow you even if we don’t trust it.”

They are being told their reliance on the faith held by their fathers was unreasonable. “Are we Amish, then, seeking to keep our buggies,” he asked. Yet “many Christians who came to faith used a map similar to our own. The overseas church recognizes our map,” he added.

But the political battled had been fought, and the conservatives had lost. It was “no longer a matter of saying the new ways are wrong. That point has passed. “

“We are in a new time. It is now here. We can see a before or after” in the Episcopal Church since the consecration of Gene Robinson and in the rise to power of Katharine Jefferts Schori. One group has been defeated” and “traditional Anglicans have lost a battle.”

There is now “no single understanding” of the faith. New Prayer Books will emerge that will enshrine the majority faction’s dogmas. The question for conservatives is not whether they can stop this but if the majority will allow “two rites [to] exist side by side.”

Prof. Seitz noted the “intermediate steps” taken at the 2012 to allow each bishop to approve or reject local gay marriage rites had “no long term integrity.”  The General Convention endorsed “diocesan autonomy here, but rejects it elsewhere.”

In the Episcopal Church and Anglican Church of Canada “we are in a genuinely new time. A time of accomplishment and tidying up,” Prof Seitz said, and this is “why encouragement matters” for conservatives remaining in these churches. “Others have left us and our blazing new trails,” but not all hear the call to depart.

Encouragement for the conservative remnant “would be allowing the status quo ante. Not a new church allowing traditional Anglicans” a home, but the existing churches giving conservatives “the moral space and right to exist.”

“Will dioceses and parishes be permitted to do what has been done before,” he asked. Will we be given the “moral space to conserve our traditions? Can bishops let go of parishes? Can dioceses choose to say no? Can we [as Episcopalians] remain a valued and trustworthy expression of the church catholic?”

To do this “it may be necessary to change the office of Presiding Bishop, reform the General Convention, rewrite the Book of Common Prayer” or enact other “constitutional reforms.”

But “if reforms are not enacted it would end the conservative presence” in the Episcopal Church, he said, adding that “both sides acknowledge the fact, at least in their political assemblies and are anxious to move on.”

A negotiated peace “would send a better signal to the world” than the picture painted of “legal battles” and vitriol. “If there is a parting of the ways it could be done in loving kindness.”

Prof. Seitz concluded his address with a quote from the Isaiah 8:16-17. “Bind up this testimony of warning and seal up God’s instruction among my disciples. I will wait for the Lord, who is hiding his face from the descendants of Jacob. I will put my trust in him.”

“Conservative parishes are waiting and trusting,” he said, as “God is hiding his face for a season for his own purposes.”