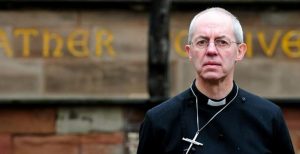 Anglican parishioners and clergy who have lamented the decline of church infrastructure on cost grounds will be perplexed to discover that £100 million has been found for a fund to atone for the “past wrongs of slavery”. The sum was announced by Justin Welby, the Archbishop of Canterbury, after a commission investigating Church investments concluded that some of the institution’s wealth was accumulated after initial investments with the South Sea Company. At the time, it traded in slaves.

We are talking about the early 18th century and it can have come as no surprise, surely, to anyone that this appalling activity took place then. Indeed, stalwarts of the Christian faith such as William Wilberforce were in the vanguard of the campaign to bring about its demise. This is not a revelation uncovered only in recent times, so why has the current Archbishop taken it upon himself to offer such a sum at a time of financial difficulties?

The Archbishop insisted that “it is now time to take action to address our shameful past”. But why is it? This has become a political imperative for so-called “progressives” only in the past few years in response to the Black Lives Matter movement. Nobody suggests today that slavery was anything other than a grotesque and dehumanising condition dating back thousands of years.

The fund is to pay for a programme of “investment, research and engagement” and to “help communities affected by historic slavery”. How will this be decided? Church leaders would do better by directing resources at present-day problems such as homelessness instead of seeking to atone for past activity for which they were not responsible and which they cannot change.