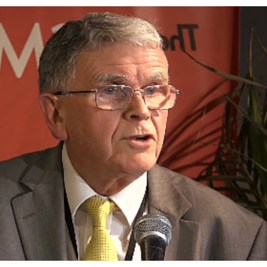 On January 15th 2023, David Holloway will have completed a remarkable fifty years as vicar of Jesmond Parish Church in Newcastle upon Tyne. Over that time, David has worked relentlessly, serving God in the leadership of this evangelical Anglican fellowship, as well as playing a significant role in the wider Anglican communion. He is someone who has consistently proclaimed Christ so that people might come to faith and grow in their knowledge of him. Church growth has been a continuing theme of his ministry, and he has seen Jesmond Parish Church grow from relatively small beginnings to a flourishing fellowship that has planted two other churches in Newcastle and Gateshead.

In 1972, the church desperately needed to find an evangelical clergyman to replace Roger Frith as vicar, and David was approached to fill the vacancy. Although he had initial reservations, he knew that this was where God wanted him to be. He was very mindful of the church’s heritage, and in particular that it was founded in 1861 in memory of the Reverend Richard Clayton to be ‘a church in which evangelical truth shall be declared and which would form a central point for the maintenance and promulgation of sound scriptural and evangelical truth in a large and populous town’. David consistently held to that vision of the church’s founders.

Later David formulated a mission statement for the church to summarise its calling: ‘Godly Living, Church Growth and Transforming Britain’.  He wanted to see Christians living for God according to sound biblical principles, the gospel being proclaimed so that others might come to a saving faith, and for the gospel to have a transformative effect on British society. A large number of ministries were developed within the church to meet these aims. In addition, David and other church members were involved in the establishment of organisations such as the Christian Institute to promote Christian values in the public square, and Anglican International Development, a Christian humanitarian charity that would provide healthcare, agricultural support and church strengthening in South Sudan and Kenya. At the heart of all of these activities was prayer; David knew that all of this work would be fruitless effort unless it was grounded in prayer.

The state of the wider Church of England was something that was very much on David’s heart. He was a member of the General Synod from 1975 to 1990, and served on the Board of Social Responsibility, and so saw its inner workings. He was greatly concerned by the appointment of liberal bishops who did not teach the truth of God’s Word. When David Jenkins was appointed Bishop of Durham in 1984, David was increasingly alarmed at Jenkins’ statements denying both the bodily resurrection of Jesus and his Virgin Birth, and indeed the historicity of New Testament documents. As a result, he was one of the leading figures who tried to persuade the Archbishop of York not to go ahead with the consecration of Jenkins as Bishop of Durham. Unfortunately, the consecration did go ahead in York Minster, to be followed two days later by a lightning bolt destroying the roof of the south transept of the minster.

A decade later David was to be involved in more conflict over the appointment of a bishop when Martin Wharton was appointed Bishop of Newcastle in 1997. The issue this time was over sexual ethics, as Wharton had given a number of interviews stating that homosexuality within a loving, permanent relationship was not sinful. David consistently taught the biblical view that sexual relationships were only acceptable to God within the framework of heterosexual marriage, and here was a newly appointed bishop proclaiming the opposite view. Therefore, David and the Parochial Church Council refused to allow Wharton to be involved in confirmation and other services at Jesmond. The church was now in impaired communion with the diocese, a situation that has continued until almost the present day.

Throughout his ministry, David has endeavoured to follow the commands given to Timothy: ‘Preach the word; be prepared in season and out of season; correct, rebuke and encourage—with great patience and careful instruction.’ (2 Timothy 4:2). As well as preaching, David knew that when necessary, he had to rebuke error when it was being propounded, because otherwise if error is allowed to grow through false teaching, people will stop seeing the truth and not find the real Jesus of the New Testament.

The stand that David has taken over issues has won him much respect, as he is seen as someone who contends firmly for what he believes. It has also of course brought him into conflict with those who disagree with his views, but he has over these fifty years continued to stand firm for the sake of the truth of the gospel.

Mr Cockburn is a retired head-teacher and is the author of the book, Contending for Truth, Standing for Jesus in a Turbulent World.