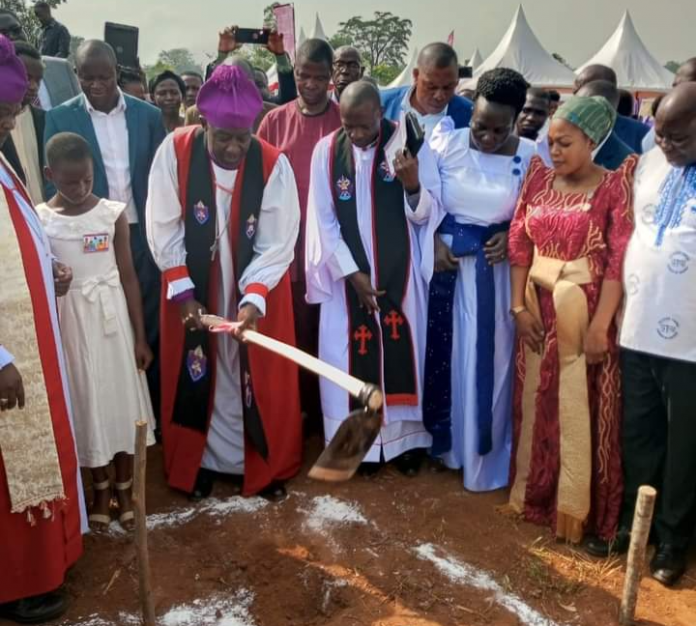 The Archbishop of the Church of Uganda, The Most Rev Dr Stephen Samuel Kaziimba Mugalu has today broken the ground for construction of a State of art Cathedral for Central Busoga Diocese.

He also commissioned the Construction committee chaired by Hon. Fred Bwino Kyakulaga, the State Minister for Agriculture and charged them to foster accountability and transparency for every amount of money mobilized.

According to Rt. Rev. Patrick Wakula, the Bishop of Central Busoga Diocese, the Three Billion Shillings Cathedral will replace the current All Saints Cathedral Iganga whose sitting capacity cannot accommodate the current and future population.

During today’s Service held at the Diocesan Secretariat in Iganga next to the proposed site for Cathedral construction, UGX 113M was raised in cash and pledges.

Earlier in the day, Archbishop Kaziimba paid a courtesy visit to St. Peter’s Iganga Church of Uganda SACCO which he commended for promoting the culture of savings and contributing to the efforts by the Diocese to be self-sustainable.

He called upon Christians and well wishers of the Diocese to join the SACCO and pledged to enroll as a member.

According to the Manager, Ms. Nangobi Doreen, the SACCO started in September 2019 and currently has 550 members with a loan portfolio of UGX 200M.

In a tweet last evening ( @Archbp_COU ), Archbishop Kaziimba commended Mothers’ Union for championing self sustainability and challenged Fathers’ Union to learn from them.

He also visited Leura School of Nursing and Midwifery in Ibulanku, Bugweri District where he commissioned a Girls’ Dormitory named after him.

He commended the Director, Mr. Lule Suleiman and his Management team for establishing the facility. The School has 600 students.

Tomorrow, the Archbishop will be the Main Celebrant at the thanksgiving service for Rev. Eric Nabuguzi as he celebrates 110 years and commission several other Diocesan projects.