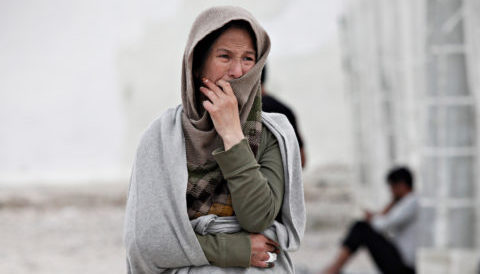 UK-based Release International, which supports persecuted Christians worldwide, is also helping Christians who have decided to remain in Afghanistan. The country is considered one of the most hostile in the world to the Christian faith.

Release International has launched a Christmas appeal to help Christians around the world who have been driven out of their homes by persecution.

Tareq and his family fled Afghanistan after they heard the Taliban were knocking on doors searching for Christians in hiding.

The couple became Christians several years ago and held onto their faith in secret. Many Afghan Christians are forced to conceal their faith because of the risk to their lives. Even before the Taliban’s rise to power, Christians in Afghanistan faced real danger for their faith in Christ.

But the risk for Tareq and Aisha grew in 2021 when the Taliban returned to power, two decades after being removed by a US-led coalition.

Soon the Taliban police began knocking on doors to investigate rumours of Christians in hiding, searching for suspected believers and ransacking their homes.

There have been reports that some Christians were put to death in these raids and others imprisoned. Such reports are hard to verify, but Tareq and Aisha believed they had no option but to flee in the middle of the night to save their lives and the life of their baby girl, who was just one year old.

Fearing their lives were in grave danger, they left their home under cover of darkness, without saying goodbyes, and were helped to cross the border by Release International partners. Tareq and his family are now being cared for by partners in Brazil.

Targeted for their faith

Another partner of Release International is in contact with Christians who have chosen to remain in Afghanistan.

Baset, a teacher, told the SAT-7 TV network: ‘Our lives have changed. As Christians we are exposed to security threats and must remain in hiding. We are always praying. Our only hope is in the true and living God.’

The Taliban have called for punishment for thieves, kidnappers and seditionists. The term seditionist is applied to anyone working to see a different form of government. And Christians, whose first allegiance is to Christ, rather than the Taliban, are likely to be considered seditionists.

For those who have decided to stay in Afghanistan there is the risk of being killed or reported to the authorities by family members or neighbours. Some who have become Christians run that risk if they are no longer seen worshipping at the mosques.

Most Christians in Afghanistan have converted from a Muslim background. Changing one’s faith is considered apostasy.

‘There has always been persecution of Christians in Afghanistan,’ says Release International associate Todd Nettleton, of Voice of the Martyrs USA. ‘It’s not just the Taliban that will persecute you for following Christ, it might be your father. It might be your older brother who says, “By following Jesus, you have brought shame on our family.”’

‘Growing numbers of Christians across the world are being targeted because of their faith and are having to flee,’ says Paul Robinson, Release International CEO. ‘Their lives are at risk from militants, their families, and in some cases the authorities, as in Afghanistan.

‘That’s why we’ve launched our Christmas appeal, to help Christian believers who feel they have no choice but to leave their homelands to find safe haven. Their stories today echo that of Mary and Joseph, who had to escape to Egypt to protect their new-born son, Jesus.’

Despite the forced exodus of Christians from Afghanistan, there are already signs that the small church that remains is growing as people search for truth and hope amid their country’s turmoil.

Release International partners say there are signs that the troubles in Afghanistan are causing many moderate Muslims to consider, question and evaluate what they believe and where they place their trust.

Voice of the Martyrs USA believes a Christian presence remains throughout Afghanistan: ‘There are Christians in every province of Afghanistan.’

Afghanistan has become a country of particular concern to Release International and its affiliates. The rise of the Taliban is likely to encourage other extremists, including in Pakistan, which has its own form of Taliban, and where Christians can be accused of blasphemy as a way of settling scores and eliminating them from society.

Release International is active in some 30 countries. It works through partners to prayerfully, pastorally, and practically support the families of Christian martyrs. It supports prisoners of faith and their families; Christians suffering oppression and violence, and those forced to flee.