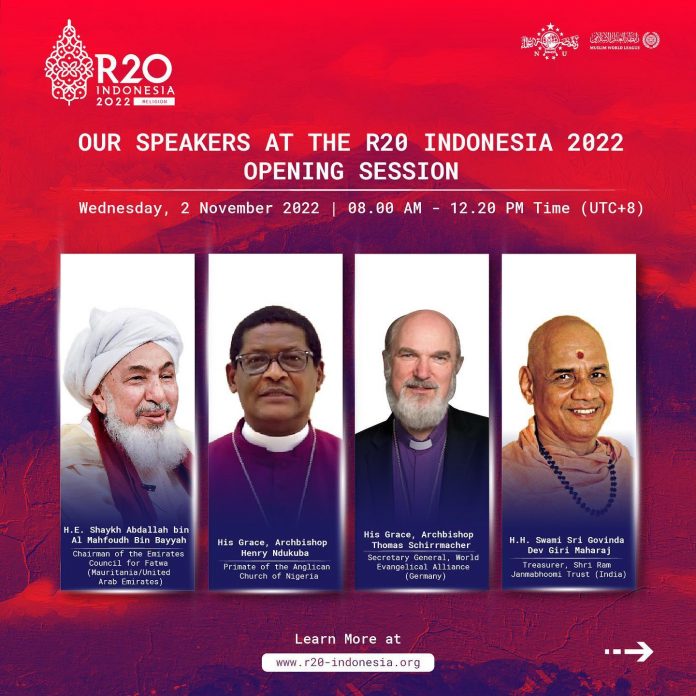 May the Grace and Peace of our Lord and Saviour Jesus Christ be upon us and our World. I am delighted to address this very important gathering on the occasion of the G20 Religion Forum (R20) International Summit of Religious Leaders. It is such a great privilege this morning, in the company of other World Religious leaders, to consider the place of the religious community in the future growth and welfare of the people. I speak for the Church of Nigeria (Anglican Communion), the largest Anglican Church in the world, with 25 million regular worshippers. I also speak from the Global South, the present Centre of Gravity of Global Christianity, that is, the Global South is where Christianity is experiencing rapid growth, people are becoming Christians daily and finding in Jesus Christ hope for living and eternity. They have found the Word of God and the Holy Spirit their source of strength and hope in the face of great challenges. There are now over 52 million Anglicans in the Global South out of 85 million worldwide.

Africans are reported to be spiritually oriented and religious and we are. Across the religions in our continent we share a deep awareness that we live our lives in a world we did not create and with spiritual realities, we must take account of. So it is most encouraging to us that Indonesia has taken the lead for those of us from the Global South to bring religion to this global platform of discussion and seeking solutions to the challenges that face our nations. It is my hope that the leaders of nations that have, for the moment, the privilege of political and economic power will be humble enough to learn that from our religious traditions we have great riches, values, and resources to bring to international deliberations and decision-making.

Jesus Christ said that He “came not to be served but to serve and to give his life as a ransom for many.”1 As the Archbishop of Canterbury said at the funeral of the late Queen Elizabeth, “People of loving service are rare in any walk of life. Leaders of loving service are still rarer. But in all cases, those who serve will be loved and remembered when those who cling to power and privileges are long forgotten.” And loving and selfless service is at the core of who we are as Christians which is also common ground in our religious traditions. The constraints of the love of God in service have not only sustained us in the face of much hardship, persecution, marginalization, and suffering but motivates us to extend love even to our oppressors and enemies.

You are not unaware of the challenges all of us face in our communities from religious extremism, both now, and as a result of such extremism in the past. We will be hearing at this conference about those faced by our Christian community in Nigeria from religious extremism and terrorism. These attacks in Northern and Central and other parts of Nigeria are a clear attempt to terrorize and displace local populations of Christians so that they flee and leave their land and property.

Christians in Nigeria, since the formation of the nation, persistently faced persecution, especially in northern Nigeria, and have learned to live with it.

What has been of great concern, in the last decade or more, is the increasing totalized violence against Christians and their communities since 2000 by Boko Haram radical Islamic sects and Al-Qaida and ISIL affiliates since 2009 and subsequently Fulani Herdsmen militias.

Nigeria is now one of the most dangerous countries to be a Christian . Thousands of people have been killed by these well-organized, well-equipped, and well-funded extremist groups and over 150 villages have been sacked. There are over 2 million internally displaced people, and thousands more have been kidnapped for sex and ransom. Churches are now forced to pay millions of Naira for ransom for kidnapped church members, and over a dozen, pastors have been martyred by these extremists. This is of course in addition to the hundreds of churches that have been attacked, bombed, and destroyed. We live daily in great trepidation.

What is most problematic in the current situation is that very few are willing to listen to the victims. Even when the UK All Party Parliamentary Group on religious freedom reported that Nigerian Christians are facing genocide in slow motion, the West insists that this is just a matter of tribal clashes between pastoralists and farmers, both fighting for scarce economic resources caused by climate change. Politically correct disinformation seems to be strategically pushed forward by Nigerian politicians and other groups who benefit from these undeclared massacres through various corrupt monetary and security budgets and the perpetuation of a radical ideology.

Islamist groups have carried out targeted killings in areas that have nothing to do with climate change factors. A case in point is the shooting at Te’egbe in Plateau State, Nigeria, where a newly posted Pastor of the Evangelical Church Winning All was murdered. The group went straight to his house, shot him dead, and left. He was neither a farmer nor his village in a grazing reserve. This is the story of many pastors killed by extremists. Their widows and orphans are still asking why and seeking the justice that may never come because the narrative has been twisted.

Christians in Nigeria simply want the killings to stop and for victims to get justice. We have been working on rebuilding communities, developing educational institutions destroyed by the extremists, and providing food and medical assistance to victims.

We need you to join hands with us to rebuild our nation. We need you to help tell our stories. We have testimonies and truth of the persecution. We want to rebuild our communities, and as a global Christian family we simply need your prayers and for you to also tell our stories. As a result of religious extremism, an ever-increasing number of orphans, widows, and homeless people have been driven out of their homes and farms and have lost everything. One of our bishops and his wife look after over 50 homeless orphans in their home.

Such attacks are also aimed at moderate Muslims, to prevent them from being moderate in their approach to policy, legislation, and law and order.

This damages the whole of Nigeria. Travel in Nigeria is very dangerous with the ever-present risk of kidnapping and violent attacks. Nigeria is a country with great natural resources to benefit its population and other countries. But it is held back from developing and sharing these for the good of all by the insecurity, uncertainty, fear, and distrust generated by religious conflict.

One of the key aims of our gathering is to address, and where possible stop, such outrages. We in Nigeria need the help of people of goodwill from all religious communities to stop the flow of arms and resources to these extremists.

Here in Indonesia you are committed to and practice religious pluralism and tolerance. Such an approach would be beneficial to the global communities, especially where religious extremism abounds.

Thank you for listening.