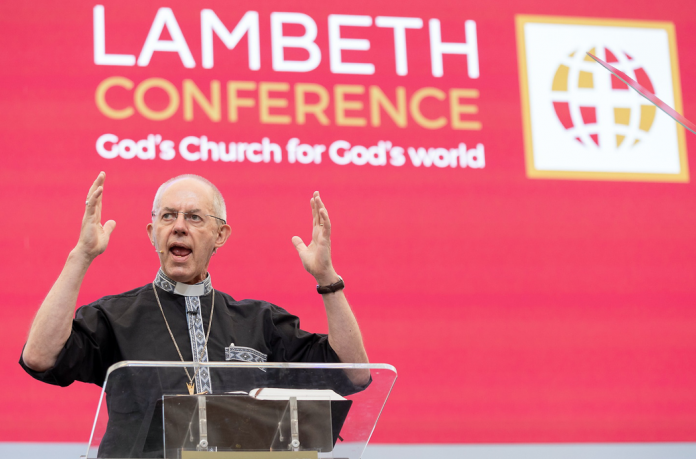 July’s was probably the last recognizable assembly of the Lambeth Conference we shall see in this generation (and perhaps the next). No longer will “all” the bishops of the Anglican Communion gather, but only some, and only from some places. No longer will the deliberation of the Communion’s bishops give rise to common teaching on matters of doctrine and morals. No longer will Anglicans around the world see themselves as engaged in a common evangelical mission.

Yes, the Conference, which represents world-wide Anglicanism, has been unraveling over the past twenty-five years, producing some tense meetings and suffering from the absence of certain disgruntled invitees. But its disintegration is now etched as a public engraving: bishops no longer sharing the Eucharist, blatant last-minute political maneuvers, entrenched geographic and cultural oppositions, the deliberate embrace of confusion over Christian teaching and witness under the banner of “plurality.” All with a period placed by the archbishop of Canterbury at the end of this sentence, announced with ringing clarity: “This is who we are.”

The Conference has gathered each decade, more or less, since 1867, representing something called the “Anglican Communion.” This phrase derived, in the mid-nineteenth century, from the great missionary expansion that saw Anglican churches planted around the globe. Originally meant to gather Anglican bishops for consultation and “fellowship,” the Lambeth gathering grew in influence, and its resolutions attained significant authority. Agreements about liturgical reform and doctrinal adaptation facilitated both change and dogmatic stability across the international Anglican landscape.

Things fell apart by the end of the 1990s. The 1998 Lambeth Conference almost blew up over the issue of homosexuality: A resolution affirming that people should have sex only within heterosexual marriage was affirmed after acrimonious debate, then immediately dismissed by many Western bishops once the Conference ended. ­Ecclesial splits in North America dragged churches into expensive litigation. Subsequent Conferences have been boycotted by large numbers of non-Western bishops. The Communion and its bureaucratic offices have barely limped along.

This year’s Conference was meant to help bring things back together. I observed it only from a distance, but I am aware of the great labor, prayer, and goodwill that went into its preparation (of which I was a part), and of the efforts of many present to be faithful, open, and hopeful. For all my frustrations, I admire the archbishop of Canterbury and the many bishops who worked hard for this affair. But the result simply didn’t add up.

The penny is finally dropping. Anglicans are “irreconcilably ­divided”—that is, their divisions are viewed on all sides as arising from essential commitments, which cannot be compromised. Anglican leaders are finally admitting that these “essential commitments” are tied up with claims about sexual identity and its scriptural (and hence Christian) meaning. Not that most Anglicans did not already know this. But at the public and administrative levels of leadership within the Communion—among bishops and their theological advisors or subalterns—a refrain of the past two decades has insisted on the secondary nature of these differences. Sexuality and its scriptural significance, it was explained, do not touch “core” realities of the gospel; they are “matters indifferent” (adiaphora, in the technical sense of not being doctrinal issues that should divide the church), or, if not quite that, at least matters that can be set aside as we focus on our commonalities and continue to chug along “together.” The Communion could carry on as a Communion, we were told, without resolving the supposedly secondary issues of sex and sexual identity.

It was at best a naive view and at worst a willful refusal to admit the obvious in hopes of maintaining a grip on ecclesiastical power. Though theologians, formal and informal, can argue that this or that matter ought to be adiaphora, the category is in fact purely descriptive. Christians divide over what they think is important, not according to a template devised by scholars. So “sex” is not important? Prove it to the Communion! Opposing sides say otherwise and have proven their commitments through their actions. Confusion, disagreement, and political hostilities over sexuality reflect deep cultural issues that may one day be resolved—but not in the short term, and probably not without the intervention of catastrophic social changes driven by factors other than theological discussion.

The Anglican “Communion,” therefore, is no longer a “communion” in the twentieth-­century sense, a sense that grew out of a nineteenth-century understanding and experience of common Christian mission. There are Anglican leaders who seem quite happy with the fragmentation; indeed, this summer’s Lambeth Conference seemed at times giddy with relief at having left behind the desperate efforts to paper over disunity. But if the Anglican “Communion” is not the Communion of the past, what is it?

First, it is necessary to clarify what else today’s Communion is not and does not do. The Anglican Communion no longer holds a common teaching about the gospel. There can be no “common Anglican catechesis” (let alone a “common Anglican Catechism,” as a recent Anglican–Roman Catholic International Commission recommended), because the Anglican Communion holds no gospel formation in common with the great traditions of the Church Catholic. Among the Communion’s members there can be no shared curricula, no shared seminaries, no shared ordained pastorate. Therefore, the Anglican Communion is incapable of a common evangelistic mission. Perhaps some cooperation here and there on an ad hoc, local, and personal basis, but nothing in the way of an organized, conversionary witness in a non-competitive and mutually supporting fashion. Finally, of course, this means no eucharistic communion. That fundamental sign of disunity in Christ has already been a creeping reality, given the divisions of the past twenty or so years. Such a reality would be shocking, were it not already part of the resignation that has increasingly characterized Anglicanism over the last two decades.

I have always believed that these elements—common catechesis and common witness made concrete in shared ministry and eucharistic fellowship—are constitutive of “communion,” the famous koinonia of the New Testament Church, which theologians and ecumenists have painstakingly elaborated in the past century. The de facto result of this summer’s Lambeth Conference, articulated mostly by its official spokespersons, has been to constitute “communion” by new elements: goodwill, local decision-making, and bureaucratic commissions. The ­dubious use of the term “subsidiarity” by Justin Welby, the archbishop of Canterbury, to justify the vast range of often contradictory Anglican stances on biblical interpretation, teaching, moral judgment, ordained pastorate and priesthood, family life, and even eucharistic fellowship epitomizes the profound shift. What is “common” (and hence “communal”) is now defined as what is humanly tolerated, rather than what is embraced by the power of the Spirit’s “communion”: truth, perfection, sacrifice, discipline, agreement, peace (2 Cor. 13:7–14).

Does this mean that Anglicans no longer have any ministerial or missionary ties at all? Surely not. Here we come to the positive (though perhaps only ­aspirationally so) side of the “Communion” in its new form. We can and should share in straightforward “works of mercy”: feeding the hungry, ministering to the destitute, visiting the imprisoned, tending the sick, burying the dead. To judge by the words of its most public leaders, the Anglican Communion has come to represent a progressive version of the works of mercy: addressing injustice, fighting corruption, combating climate change. The time has come to admit that works of mercy provide the only framework for the current Anglican vocation.

It is a valiant framework, as far as it goes (though we may wish to ratchet down the world-­changing claims that invariably append these imperatives). “People of goodwill” can and should share their ­resources for the sake of the suffering and those in need. We can put a period after that as well. But Anglicans need to be clear about the limitations of this common work of mercy: It is not surreptitious evangelism, not an instrument of political and moral suasion. Above all, whatever common mission we may have to care for the corporeal wellbeing of others must not serve an agenda to further this or that view of sexuality—the festering wound of our disunity. Anglicans are currently supporting competing (and mutually suspicious) global funds “for world relief.” These endeavors should be softened in their oppositions and manipulations. Let Anglicans just share their money (and thus some of their labor) for the poor, tolerating all other divergences, and be satisfied to call that “communion.”

Read it all in First Things