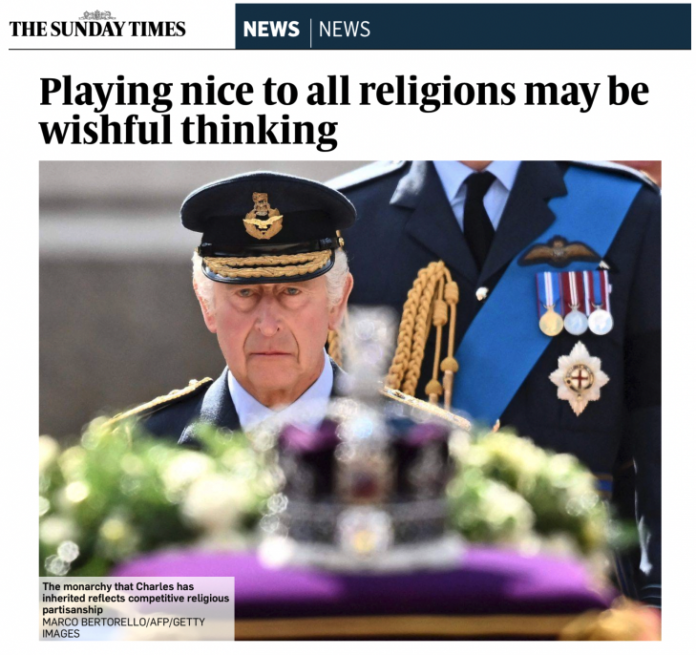 King Charles took the earliest opportunity to publicly commit himself to the Anglican Church, speaking in his first address to the nation of his “deeply-rooted” faith.

The new monarch has become the new Supreme Governor of the Church of England, with the striking title of ‘Defender of the Faith’, and, as one of his first acts last week, he convened the leaders of the major religions in the UK at a meeting at Buckingham Palace.

In a statement to those assembled, he spoke of Britain as a “community of communities”, a diverse nation with many religions and beliefs. He had a duty to protect this diversity, “including by protecting the space for faith itself,” he said. “I hold myself bound to respect those who follow other spiritual paths, as well as those who seek to live their lives in accordance with secular ideals.”

There is no doubt at all that this is a reasonable, pragmatic and culturally- and politically-well attuned ideal for the monarch of a multicultural society at the beginning of the 21st century.

But the advent of multiculturalism and different competing faiths introduces a level of potential conflict that the monarchy needs to avoid if it is to flourish, and perhaps even survive.

The King’s interpretation of faith may commend itself to some, but may offend and alienate many of those who practice their faith.

There will be many adherents of Christianity, other religions, and atheism who respond to this inclusivity by saying: not in my name. This is not through any bigotry or narrowmindedness necessarily, but flows from a commitment to the exclusive truth claims of their religions.

The reality is that Christianity, other religions such as Islam, and atheism are ultimately incompatible with each other and, across the world, engaged in an energetic struggle for the hearts and minds of the communities they live in.

The King’s statement raises a serious philosophical and spiritual issue that he has long been concerned about finding a way to manage. He has form: he gave earlier signs of his thinking in what became a notorious interview with Jonathan Dimbleby in 1994. He expressed the view he wanted to be “Defender of Faith”, rather than Defender of the Faith, which refers specifically to his role in the Church of England.

This has haunted him ever since. The critical and cynical saw it as being the religious equivalent of what Gerald Ratner had achieved in undermining public confidence in his own brand.

In religious terms, such indiscriminate accommodation of other ideologies diminished the claims to the uniqueness that were foundational for Christianity.To the orthodox Christian, this is a substantial and fatal diminishment of Jesus’ own claims to be the unique Son of God, and the Way, the Truth and the Life.

In 2015, Charles attempted a subtle and reasonable repair of the damage in an interview on BBC Radio 2. He explained that he had intended to say that he wanted Anglican Christianity to act as a form of protective umbrella to all other faith positions.

This is, at first sight, wholly commendable – and his mother as Queen said something similar with greater precision and clarity. But this otherwise commendable, hospitable view depends on the other faiths sharing the same outlook.

Increasingly, as both Islam on the one hand and the populistic Dawkins-style of atheism on the other both grow in confidence and numbers, they have become more muscular and ambitious in their prospective influence. The model of a rather limp (if generous) C of E protective umbrella no longer fits the facts on the ground.

His statement last week, too, whilst appearing generously inclusive, disturbs a hornets’ nest of theological and cultural controversy. The underlying difficulty is that this apparent generosity overlooks and contradicts what some of the major religions think of themselves.

Islam and Christianity in particular have long-established beliefs that each respectively tells the clearest and most accurate truth about the nature of God and what it is to be human. And, while there are some elements of similarity and overlap, they stand in opposition to one another at critical and non-negotiable points.

Within more conservative and traditional circles of the church, both inside and beyond Anglicanism, there has long been a concern that King Charles was more interested in spirituality in general than in a committed defence and representation of Christianity in particular.

As Prince of Wales, he took the view that his constitutional apprenticeship before becoming King should involve voyages of philosophical discovery, alongside his patronage of various causes.

As a young man, Charles came under the influence of the highly charismatic writer and adventurer, Laurens Van der Post, a disciple of and conduit for the ideas of Karl Jung.

One of Jung’s most influential ideas made the case that religion provided a universal language of self-discovery and self-realisation. For Jung, the specific contents or claims of the religion were not as important as the fact that it acted as a vehicle for an internal journey.

Across the Western world, where Jungian ideas have profoundly influenced thoughts across a wide range of disciplines and interests, something of a civil war has developed within the churches, between those who believe in inclusivity and those who advocate for exclusivity, or the liberals and the conservatives. The Anglican Communion in particular has come close to schism over it.

Charles’s self-declaration that he was interested in faith in general appeared to conservative Christians to mark him out more as a Jungian than a Christian.

His most recent statement, too, prioritises the nice above the real.

The reality is that the monarchy the King has inherited reflects competitive religious partisanship in both its history and language, as well as in the oaths that define it.

The King’s statement last week provided a substantial insight into his personal beliefs. With his mother, the public weight of office and the private fire of personal devotion and experience found themselves movingly matched. And as she grew older, she grew more articulate in the public expression of her private faith.

We will discover more of where the new King is poised on the scale between personal allegiance to Jesus and public representation of the state Church during the coronation service, with its complex balance of competing ideologies. Before that, as with the Queen, a window into the present state of his beliefs will open more fully when he gives his first Christmas broadcast to the nation.

But it remains to be seen whether or not wishful thinking, however royal, can create a bridge across religious and philosophical fault lines that have proved intractable through so much of history.