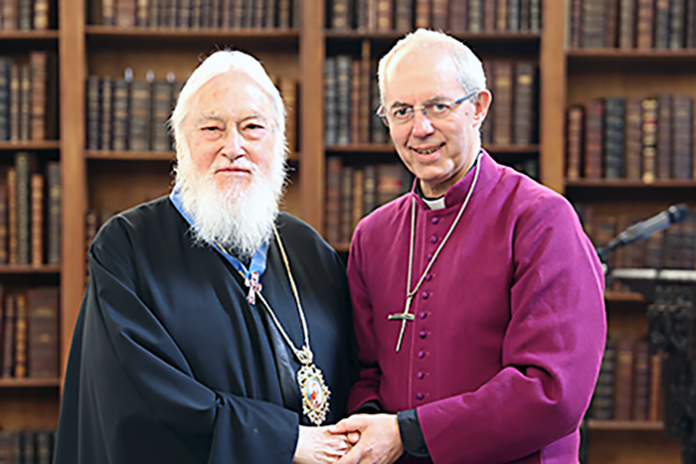 The Secretary General of the Anglican Communion, Dr Josiah Idowu-Fearon, has paid tribute to the Co-Chair of the International Anglican-Orthodox Theological Dialogue, Metropolitan Kallistos of Diokleia, who died in the early hours of this morning (Wednesday).

Metropolitan Kallistos founded an Orthodox parish in Oxford, England, as part of the Greek Orthodox Archdiocese of Thyateira and Great Britain under the jurisdiction of the Ecumenical Patriarchate of Constantinople. Since his consecration in 1982, he has served as an assistant bishop in the archdiocese.

Writing to the Ecumenical Patriarch Bartholomew today, Dr Josiah Idowu-Fearon said: “it is with great sorrow that I heard today of the death of His Eminence Metropolitan Kallistos of Diokleia. I want to assure you of my prayers and those of many in the Anglican Communion, for the repose of his soul and giving thanks to God for His Eminence’s ministry as a bishop, theologian and teacher.

“Metropolitan Kallistos’ stature as an internationally recognised theologian was immense. His books on the Orthodox Church have always remained in print, and, together with his other writings, have influenced several generations of students in many parts of the world and in many traditions. Anglicans in particular owe him a great debt.

“Metropolitan Kallistos was Co-Chair of the International Anglican-Orthodox Theological Dialogue and had a significant role in the Agreed Statement ‘In the Image and Likeness of God: A Hope-Filled Anthropology’, which was presented to your All-Holiness at a service in Westminster Abbey. As Co-Chair His Eminence combined formidable scholarship with a skilled and kindly voice in the work of the Commission. Members of the Dialogue remember also the times when he presided at the Divine Liturgy, and how he brought his awareness of the holiness of God into all that he did.

“I pray that he may rest in peace and rise in glory.”

In 2017, Metropolitan Kallistos was awarded the Lambeth Cross for Ecumenism by the Archbishop of Canterbury, Justin Welby, in recognition of his “outstanding contribution to Anglican-Orthodox theological dialogue”.

Born in Bath, England, in 1934, Timothy Ware, as he was then known, was educated at Westminster School and Magdalen College, Oxford. While he was still a schoolboy he discovered the Orthodox Church, although it was not until 1958 that he was received into Orthodoxy. He travelled widely, spending time in North America, Jerusalem, on the Holy Mountain of Athos and at the Monastery of St John the Theologian on Patmos and engaging in academic research.

In 1963 his classic work “The Orthodox Church” was published; in 1964 “Eustratios Argenti: A Study of the Greek Church under Turkish Rule” appeared, and in 1965, the year in which he was ordained deacon, he completed a doctoral thesis for Oxford University on the Ascetical Writings of St Mark the Monk.

As a deacon he served both in Patmos and on the staff of Archbishop Athenagoras II of Thyateira and Great Britain. In 1966 he was appointed Spalding Lecturer in Eastern Christian Studies at the University of Oxford.

He was ordained to the priesthood and tonsured as a monk, taking the name Kallistos. He was tasked over and above his academic work with establishing a Greek Orthodox Parish in Oxford. At the time the Russian Orthodox Parish of the Annunciation was worshipping in St Gregory’s House and offered hospitality to the newly formed Greek Orthodox Parish of the Holy Trinity, before the two parishes together oversaw the building of the church which now stands on Oxford’s Canterbury Road, and which was shared in equal partnership by both communities.

Writing on the parish website, the current priest, Father Ian Graham, says: “Many of us still remember Father Kallistos from this time, and how the rigours of his academic work were combined with his parish duties. His teaching in sermons and talks, his love shown in Confession and pastoral care and above all his prayer with and for his people will be abiding memories.

“We rejoiced when he was elected and consecrated Bishop of Diokleia in 1982 – the first Englishman to be consecrated as a Bishop in the Orthodox Church since the schism of the 11th century – and although this meant that increasingly we had to share him with a wider world we continued to benefit from his love and care.”

He added: “In his essay ‘Go Joyfully The Mystery of Death and Resurrection’ Metropolitan Kallistos reminds us that ‘Death is a separation which is no separation. . . The chasm of death is not impassable, for we can all meet around the altar of God.’ In our temporary parting from him we can continue to remember him in our prayers, and we can be sure that he is also praying for us. May his memory be eternal!”

Bishop of Aberdeen and Orkney’s appeal fails, will now face trial for bullying