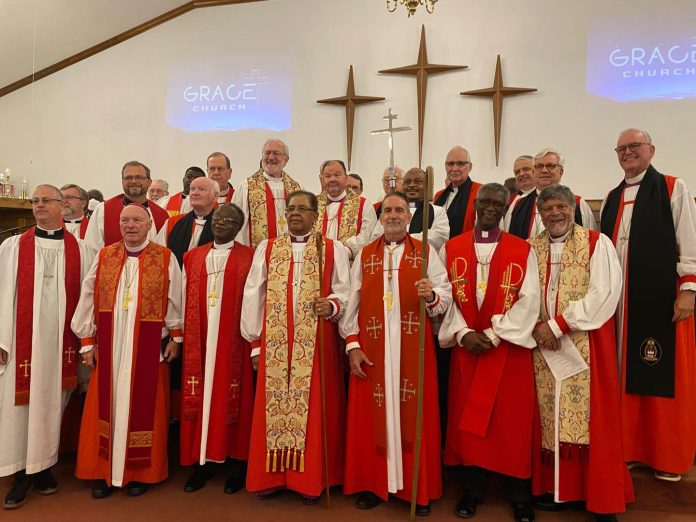 On Saturday, August 13, at Grace Reformed Episcopal Church in Moncks Corner, South Carolina, the Rev. Willie James Hill, Jr. was consecrated as the Bishop Coadjutor in the Diocese of the Southeast (REC).  “I was overwhelmed with the number of people who showed up” said Bishop Hill, adding with his characteristic touch of humor, “Whether they wanted to make some kind of impression on me or to warn me, ‘You don’t know what you’re getting yourself into,’ it was really encouraging to me.”

“I was very particular in how things happened and to be inclusive to all of our people. I wanted the consecration to have the flavor of our diocese, the kind of church we are. We are one of the oldest, if not the oldest Anglican churches that came out of the Episcopal church—back in 1873. We’ve always been Anglican in that mindset. There were some racial and liturgical issues that made the distinction. We are probably one of the “lower” dioceses, so I wanted to make sure that the pomp and circumstance of the Anglican tradition was preserved, but also some of the historical tradition as well. The Celebration Choir was outstanding and they even got Archbishop Foley Beach up and clapping—he couldn’t sit in the chair!”

As Hill steps into his role in the Dioceses of the Southeast (REC) he follows a rich history. The origins of the Diocese came about, as Hill explains because, “qualified, scholarly men wanted to be ordained ministers, but because of the color of their skin the Episcopal church did not allow it.” From this struggle, the Reformed Episcopal Church formed the Diocese of the Southeast in 1875 and it has faithfully served the community since. As Hill recounts, “Children grew up studying the Bible and heard real preaching, not 90% perspiration and 10% inspiration. Our preaching had all the energy but grounded in the Word.” Despite the racial struggles over the years, the Diocese has persevered. For example, one of the churches was burned to the ground at the height of racial tensions, but the Diocese pushed on by providing tents to continue worshipping together and eventually a new church building. “It was a diocese that God clearly had his hand on from the very beginning.”

Many of Hill’s high school classmates attended the consecration and most came up to Hill and said, “We knew you would be a minister even in high school.” In fact, Hill’s nickname in high school was “Moses” and he recounts how as a sophomore, juniors and seniors would come to him for counseling. When asked what his 18-year-old self would say about him now, Hill replied, “My 18-year-old self would say, ‘I knew the Lord had something special for you, you just wait on the Lord.’” While Hill felt called to be in the ministry at an early age, he was careful to humbly qualify, “BUT, I want to be clear in saying that I was a young man before I became a pastor and that’s all I’m going to say.”

Hill was grateful for Bishop Sutton’s message at the consecration and commented how the overwhelming sentiment was that the 23rd Psalm (“The Lord is my shepherd…) would never be looked at the same again. Sutton’s charge, “Bishop, you have a Bishop!” stood out to Hill and will be long remembered.

When asked about his vision for the Diocese going forward, Hill shared that it would be focused on restoration, reconciliation, and re-energizing the young adults. “I feel that issues negative in nature are not administrative issues or organizational, or necessarily a lack of vision…they are spiritual issues. I feel like if we get back to praying, to humbling ourselves, confessing, and repenting, that God will then hear our prayer and forgive our sins, and then God will heal our land. If we do that, then everything else will fall into place. Seek ye first the kingdom of God and his righteousness and all these things will follow.” For the younger generation, he sees so many brilliant young adults who need to know there is a place for them. “People are looking for a new beginning. They need to be reminded that we serve a changeless God in an ever-changing society. Our God is the same yesterday, today, and forever. His Word will stand no matter how much you try and mix it up. Our God will meet your needs wherever you are, no matter the century.”