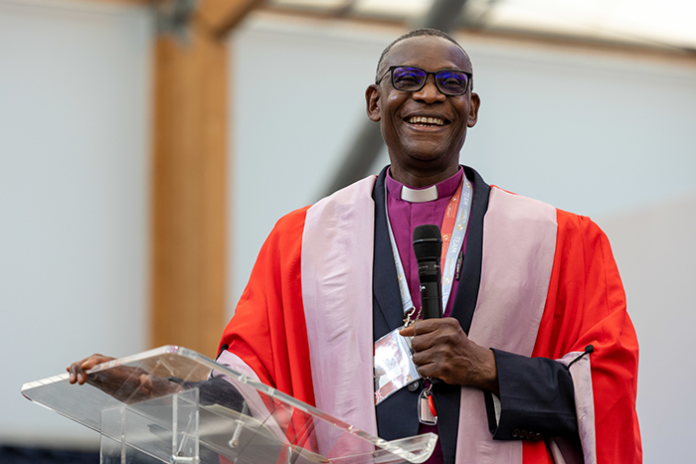 Josiah Idowu-Fearon got his reward from the Archbishop of Canterbury for his institutional loyalty at Lambeth 2022.

In the presence of a bewigged lawyer and before an international audience of 650 bishops and their spouses, Justin Welby had the Secretary General of the Anglican Communion, who steps down this month, draped with a red robe as he awarded Archbishop Idowu-Fearon an honorary Doctorate of Divinity.

The pomp and ceremony of the Archbishop of Canterbury’s ancient office were intentionally on display. With a heraldic flourish, the Anglican Communion News Service proclaimed after the event on Saturday:

‘Today’s award was presented under powers granted to the Archbishop in the Ecclesiastical Licences Act 1533. The award of Lambeth Degrees is relatively rare – only four have been granted in the past 10 years.’

The message to Anglican Communion bishops who like Dr Idowu-Fearon hail from the two-thirds world (he is a Nigerian) came across loud and clear. Loyalty to Canterbury pays. You too could get a gong if you are a good boy or girl.

Dr Idowu-Fearon’s track record of institutional loyalty to Canterbury has included attacks on Gafcon. In 2018 he wrote to the Anglican Communion Primates slamming Gafcon for developing grassroots ministry networks in, amongst other areas, theological education, church planting, bishops’ training and children’s and youth ministry.

He wrote: ‘We must protect against both duplication and the setting up of rival bodies of influence, activity and impact. This route would be one of division and confusion and it should be questioned and avoided.

‘Any structures that GAFCON might seek to establish that geographic representation on the model of the Anglican Consultative Council would be a further dangerous step.’

Gafcon’s then Secretary General, Sydney Diocese’s Archbishop Peter Jensen, gave  as good as he got:

‘The attempt by Anglican Communion Office to challenge the Gafcon Primates for supporting new ministries is further evidence of how much the institutional form of Anglicanism is out of touch with spiritual reality. The launch of our networks is a sign of spiritual vitality which ought to be welcomed and applauded.’

The Gafcon rejoinder reminded readers: ‘For decades the Anglican Consultative Council and its secretariat, heavily funded by western revisionists, has shown little respect for the matters of conscience which currently separate Anglicans.  The recent history of its networks reveals a pattern of trivializing the Communion’s challenges by attempting to draw orthodox Anglicans into closer cooperation with those who continue to tear the fabric of the Communion.’

In its communique from Lambeth 2022, the orthodox Global South Fellowship of Anglican Churches (GSFA) was clear about its doctrinal solidarity with the Gafcon bishops of Nigeria, Rwanda and Uganda who boycotted the Conference:

‘Other orthodox Bishops are also making the same call (to biblical faithfulness) but have chosen not to come to the Lambeth Conference 2022. Two different responses in form but we speak with one voice and share the same stance, namely that there is something seriously wrong about the life of our Communion before God when the church embraces and teaches same-sex unions as acceptable to God.’

The GSFA has very arguably done considerable good with the clear statements of countercultural biblical truth it has issued in Canterbury, which have been reported in the British media. But might the GSFA bishops now reckon that Archbishop Welby’s affirmation on Tuesday of Western revisionist Anglicans represents a turning point? He acknowledged that for ‘the large majority of the Anglican Communion the traditional understanding of marriage is something that is understood, accepted and without question not only by Bishops but their entire Church, and the societies in which they live’.

But the gushing tone in which Archbishop Welby affirmed the ‘minority’ of Anglican Provinces was surely significant. They ’have not arrived lightly at their ideas that the traditional teaching needs to change,’ he said.

‘They are not careless about Scripture. They do not reject Christ. But they have come to a different view on sexuality after long prayer, deep study and reflection on understandings of human nature,’ he claimed.

If the solid doctrinal agreement between Gafcon and the GSFA takes the same practical form before the next Conference, Lambeth 2022 could be the last gathering with a significant representation from the Anglican majority in the two-thirds world. The next Lambeth would then be mainly made up of privileged, politically left-wing Western Anglican bishops giving each other hugs and gongs.

In the wake of Lambeth 2022, the question now seems to have become more pressing for the Global South: would not the visible side-lining of Western revisionism at the next Lambeth, if there is one, be better overall for the cause of global Anglican orthodoxy?