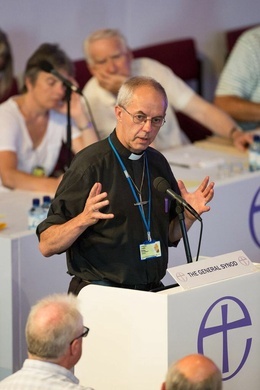 I have asked for the Archbishop to put affirming 1.10 back on the table at Lambeth Conference or I will be forced to table a motion of no confidence asking for his resignation as Archbishop and Primate of the Anglican Communion at the next meeting of General Synod.

At July’s Synod you answered a question I put to you, by telling me the most important role of members of General Synod is accountability of Bishops and our institutions.

In removing the opportunity to affirm or vote against resolution 1.10, you have damaged the Church, failed to Witness Christ and turned your back on God’s word.

You and all those Bishops who can’t even affirm the Biblical definition of marriage should be ashamed.

You should be admonishing and rebuking your brother and sister Bishops, not facilitating false prophets and teachers.

Those who won’t assent to God’s word should resign from God’s Church!

You have chosen to submit to culture over Christ. You’ve chosen the World over witness.

While I was not initially in favour of a vote, once it was tabled it became an issue of standing up for God’s word.

You dishonoured God in your approach to these matters.

You’ve sent a message to the world that there is not one truth as found in the scripture, that Christian marriage is not always defined as between one man and one woman, that sex outside of marriage is permissible or that blessing sin is acceptable.

There is simply at this stage no reason to have not affirmed and assented God’s word.

Instead, you’ve chosen secular politics and a luke warm approach to doctrine to appease people who ran a secular campaign. You’ve sanctified them in these steps.

Synod was promised LLF wouldn’t be a process but a teaching document. We were told after the shared conversations the Bishops wouldn’t attempt to change doctrine again. Yet that is now the clear direction you are heading in.

Llf has been used as an excuse not to support God’s word this week by English Bishops.

I no longer have faith in the House of Bishops and believe this is a culmination of rigging of the system to appoint liberals and politicians as Bishops. You are the first among equals. Their leader.

While you are not the Pope, people look to you for strength and guidance. Even the Pope has explicitly said, as a liberal Pope, that the Church cannot bless sin, let alone change the sacraments to allow same sex marriage by Priests.

Not standing up for the word of God and your handling of this affair makes you unfit for office.

It is therefore with great sadness I make known my intention to table a PMM calling for your removal as Archbishop of Canterbury and therefore as leader of the Anglican Communion and member of the House of Lords.

However, before tabling this motion, I would ask you to do the honourable thing and resign, or better still, for you to stand up the Bible and God’s word by pushing for a vote on resolution 1.10 so the majority of the communion can show its support for scriptural truth.

Those small numbers against this happening are apostates. They should not have been welcomed at the table, and have now been allowed to take charge.

Liberals are a cancer on the Church and needs to be removed before apostasy spreads to the whole body.

Scripture warned us of such sheep in wolves clothing, and you have facilitated false teaching by allowing the communion to deny the truth found in the Bible.

It is not too late to stop this but the choice is yours.

If it wasn’t for the majority of the communion who I know don’t side with apostasy, I would not in good conscience be able to continue as an Anglican. Please remember that most people in the pews share my position and not that of a small number of political activists who want to capture Christianity to erode our protected characteristics and change our doctrine.