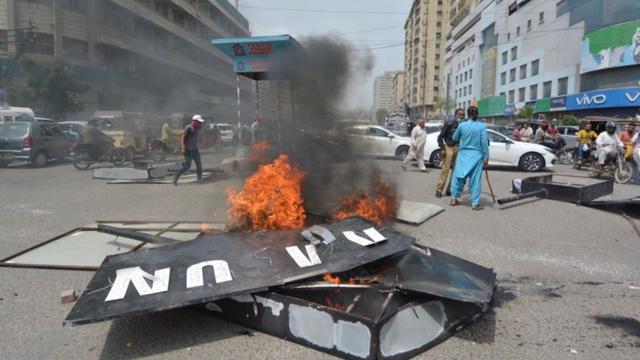 An incident largely debated in the social media opens a window on the peculiar world of blasphemy charges in Pakistan. It took several days to netizens and the police to clarify what happened. Although not everything is clear, more details have now emerged.

On July 2 the rumor spread that a QR code posted on a Samsung promotional billboard outside the Star City Mall in Karachi was “blasphemous.” According to eyewitnesses who posted on Twitter, it was unclear where exactly the blasphemy was, but a mob congregated, reminiscent that weeks before accusations had widely circulated that a QR code on 7UP bottles looked like the name of Prophet Muhammad.

Samsung billboards were destroyed, and rioters entered into the Samsung store and tried to continue their destructive work. At some stage, they started asking each other in which sense exactly the QR code was blasphemous. They did not find an answer, but somebody explained that the QR code was related to a WiFi network to which the name had been given of Mu’awiya, the 7th-century first Umayyad caliph, followed by an insult common in all languages and referred to the allegedly less than honorable profession of his mother. Mu’awiya was the opponent of ‘Ali, and from this opposition the schism between Sufi and Shi’a Islam originated. The Shiites regard Mu’awiya as a villain, while for Sunni Muslims, although he made mistakes and ruled oppressively, he should still be respected as a companion of the Prophet and one of the scribes of the Holy Quran.

It is thus probable that the network was created for personal use by a Shi’ite citizen. To this day, no evidence has emerged that the Samsung QR code directed to that particular network, while by looking at the list of all the networks available in the area, the name of the one with the offensive allusion to Mu’awiya would have been found.

Read it all in Bitter Winter