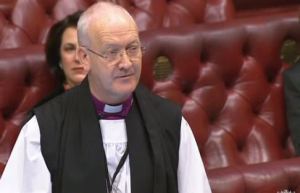 “(a) lament Russia’s illegal invasion of Ukraine, the suffering and terror experienced by Ukrainians and the repercussions and anxiety felt globally for our common future;

(b) urge all Christians and people of faith to pray that the war in Ukraine be ended, that the risk of strategic miscalculation between conflicting parties be avoided and that the Russian people find respite from an authoritarian government;

(c) call on each diocese to work towards providing long term refuge to refugees from Ukraine and other conflicts, and to contribute to the Disasters Emergency Committee’s Ukraine Appeal or the appeal organised by USPG and the Diocese in Europe;

(d) call on Her Majesty’s Government to work to secure a negotiated peace that provides for the flourishing of relations in Ukraine and between nations in Europe and to provide a generous response to those seeking refuge from the conflict.”

In his explanatory paper, Bishop Baines – the Church of England’s lead bishop of foreign affairs – noted the wide ranging financial, cultural and religious sanctions imposed on Russia in the wake of its February invasion. He noted the “coordinated financial measures and trade restrictions targeting Russia’s financial sector, strategic sectors of the economy such as defence and aerospace and individuals close to the regime … [were] unprecedented and amount to a full scale financial and cultural warfare.”

However, Bishop Baines argued the aim of the sanctions “remains unclear”. Sanctions were a “blunt instrument” he wrote, asking “whether the indiscriminate nature of these measures, which target not just the government and senior officials but all Russians, helps Ukraine and how much it just hurts the Russian people? Given the Russian government’s authoritarian nature, insufficient democratic space exists for Russians to exercise their opposition to the war. Imposing punitive measures which affect all Russians, whatever their view, risks provoking resentment and fuelling nationalism.”

“Questions such as these will become more pronounced the longer the war persists,” he observed, but “For the moment, however, Bishops have supported the sanctions package.”

The bishops of the Church of England had also “pressed the Government” to “strip illicit Russian money from the UK financial system” and the Church Commissioners and Church of England Pension Board had divested themselves of its Russian holdings, and would make no further investments in Russian shares.

“The Russian Orthodox Church has not escaped censure for its alleged support of the war,” he wrote.

“In May, the EU imposed a travel and asset ban on Patriarch Kirill for his support of the invasion. While the Russian Orthodox Church suspended its membership of the Conference of European Churches over 15 years ago on doctrinal differences, there have been no formal moves as yet to suspend the Russian Orthodox Church from the World Council of Churches. Despite the deep disappointment, even anger, that many feel with the support Patriarch Kirill has offered the Russian government – Pope Francis has warned Patriarch Kirill of becoming the Kremlin’s ‘altar boy’ – such a move remains unlikely given the high threshold of votes needed to trigger such action. The WCC is a global ecumenical body that includes many churches from non-European countries that have remained unaligned in this conflict. At a time of renewed international division, the WCC provides a vehicle for critical dialogue and engagement,” Bishop Baines wrote.