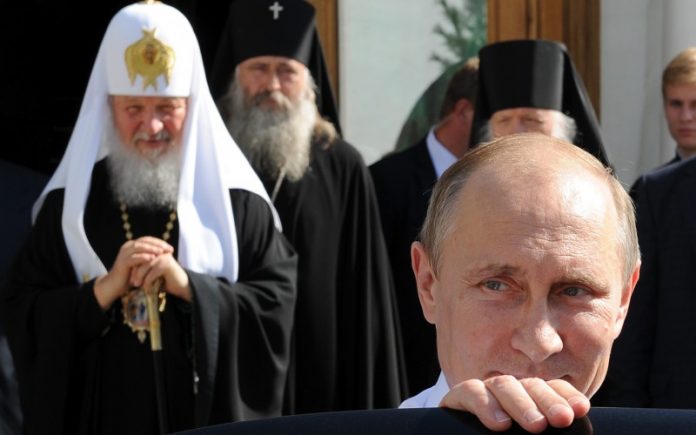 The Russian Orthodox Church of the Moscow Patriarchate (ROC–MP), which President Vladimir Putin has long counted as one of “the bindings” holding his so-called Russian World (Russkiy Mir) together, is in retreat almost everywhere. Indeed, in light of recent events, it is on the way to losing its status as the largest Orthodox Church in the world in terms of the number of bishoprics, parishes and even active believers, with the Ukrainian Church quickly rising in prominence (Thinktanks.by, May 30). Moreover, the ROC–MP is losing out across the former Soviet space, which the Russian Church considers its canonical territory, as Orthodox leaders and laity seek at a minimum to distance themselves from Moscow or even break completely with it (Nezavisimaya Gazeta [1] [2], May 31; Interfax, May 30). And finally, it is losing ground within the Russian Federation itself, as revealed both by polling data and growing reports of efforts by some to break away (Levada.ru, May 16; TRT Na Russkom, May 17).

For these reasons, combined with Russian Patriarch Kirill’s unwillingness to put himself at odds with Putin and his policies, the Moscow Church is losing influence in the Orthodox World. Ever more of the leaders and laity of that tradition around the globe are no longer looking to Moscow for leadership; more broadly, Patriarch Kirill is so toxic that he has been banned from entering the European Union. In point of fact, the only place where the ROC–MP has been able to go over to the offensive is in Africa: the Moscow Church is using Russian government power to elbow aside other smaller and weaker Orthodox patriarchates to take over those local communities of the faithful. Yet this brazenness only further alienates most Orthodox from Moscow (Nezavisimaya Gazeta, May 31; see EDM, February 3).

Not surprisingly, the most dramatic of the ROC–MP’s international defeats has come in Ukraine. There, the leaders of the Ukrainian Orthodox Church of the Moscow Patriarchate (UOC)—not to be confused with the Orthodox Church of Ukraine (OCU), which was granted autocephalous status by Constantinople in 2019—declared their Church independent of Moscow at the end of May because of their opposition to Putin’s war in Ukraine. The UOC’s action within Orthodox canon law leaves it in a position that is not entirely clear. It is short of autocephaly, as only the Ecumenical Patriarchate can extend that; yet this declared independence from Moscow presumably opens the way for many if not all Orthodox worshippers in Ukraine to ultimately join the autocephalous OCU. If that happens, the OCU will become the largest Orthodox Church in the world, displacing Russian Orthodoxy; and Kirill will lose the votes of those Ukrainian bishops he created to cement his rule in Russia, putting his own position as patriarch in jeopardy. Russian experts like Andrey Melnikov, the religion editor of Nezavisimaya Gazeta, are already saying that the UOC’s action represents the collapse of “the last thing binding Russians and Ukrainians together” (Nezavisimaya Gazeta, May 31).

The Moscow Patriarchate is not giving up without a fight, arguing that the UOC’s unilateral declaration does not make it independent; and it is relying on Russian military power to help press its case (Interfax, May 28,  29; Meduza, Apostrof, Russian7.ru, May 27). Moreover, UOC bishops in Russian-controlled territories of Ukraine are refusing to go along with their senior hierarchs’ decision. Moscow commentators, meanwhile, insist that what the UOC has done will accelerate the demise of Ukraine as a state, and the Ukrainian Church’s “separatism” will be reversed once the Russian Armed Forces defeat Ukraine on the field of battle (Russkaya Liniya, Vzglyad, May 27; Rosbalt, May 28).

The events among the Ukrainian Orthodox are nonetheless echoing elsewhere, as Orthodox Churches in other former Soviet republics and even some Orthodox congregations within the Russian Federation seek to distance themselves from Putin’s war. The two most interesting recent developments in this regard are in Lithuania and among the Cossacks in Russia itself. In the southernmost Baltic Republic, Metropolitan Innokenty, who heads the small Russian Orthodox Church there, has asked Moscow to extend a special and more independent status to his religious body. Reflecting its weakened position, the ROC–MP has now agreed to form a commission to look into the matter and may give a positive response lest its opposition lead Lithuania’s Orthodox to break completely with Moscow (Nezavisimaya Gazeta, May 31; Interfax, May 30).

Moreover, the All-Cossack Social Center, which opposes Moscow’s policies toward that community, says it is undertaking the formation of Cossack Orthodox congregations independent of the Moscow Church. The Center made this announcement in an email distributed to those who follow Cossack affairs, a copy of which is in this author’s possession. This activity suggests that even within the Russian Federation, the ROC–MP may be less stable than many have assumed (Windowoneurasia2.blogspot.com, October 13, 2018).

In the face of these defeats and retreats, the Moscow Patriarchate is playing up even the relatively minor victories it appears to be winning in Africa. Its exarch for the continent, Metropolitan Leonid, has visited the region for the first time. He announced that his Church includes 180 priests in 12 countries. But analysts have pointed out that many of the African Orthodox faithful are not indigenous people but rather Russian officials, soldiers or émigrés. At the same time, the ROC-MP’s extreme assertiveness on the continent has infuriated most of the rest of the Orthodox World because Moscow is clearly poaching on the canonical territory of the Alexandrian Patriarchate (Nezavisimaya Gazeta, May 31; see EDM, February 3).

Patriarch Kirill continues to try to put the best face on the situation (Interfax, June 1), but he and his Russian Church are in trouble. As recently as three years ago, he dreamed of making the ROC–MP into “an Orthodox Vatican”—the center of Eastern Orthodoxy and a place where all decisions regarding this branch of Christianity would be made (see EDM, July 9, 2019). But now, he is losing his flock in Ukraine, elsewhere in the former Soviet space, and even inside the Russian Federation; he is under sanctions by the EU; and he faces a future in which the ROC–MP will not even be the largest Orthodox Church in the world. All this is happening because he has tied himself so closely to the Kremlin rather than being true to his faith.