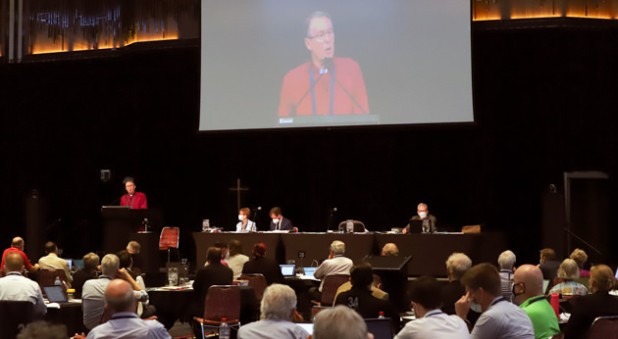 The COVID pandemic has had positive and negative effects for the church in Australia, the Archbishop of Adelaide and Primate of Australia, Geoff Smith has told the first day of the General Synod (or parliament) of the Anglican Church of Australia.

In what has been a twice-delayed session, it is convening on the Gold Coast. Delegates from across the country, including the Sydney Diocese, are attending the 18th session of the three-yearly Synod.

A ‘feeling of tiredness’

“There have been positives associated with Covid for the church in Australia – for instance a much wider exploration of on-line options, and a realization that actually the church can pivot quickly when it needs too,” Archbishop Smith told the opening session. “There has also been a negative impact for the church in Australia. We have seen attendance numbers drop, and in many cases calls for assistance rise. People who are concerned for their health have been reluctant to re-join in-person gatherings, and the constant need to go to ‘plan B’ or reschedule or cancel has been very wearing.” Archbishop Smith identified a ‘feeling of tiredness in the wider community’. “There has been a loss of momentum in terms of strategic activity, and we are just trying to get done what needs to be done as best we can.” he said.

The meeting will deal with various issues, including domestic violence. “The rate of violence and abuse is tragic and brings great harm to individuals and families,” he said. “The research projects undertaken in response to a resolution passed by General Synod 17 laid bare the reality that the Anglican Church is not exempt from this tragedy. People from our churches have been involved and impacted.” Archbishop Smith said.

The Primate, who chairs the five day meeting, noted this was the first meeting of the General Synod since the Marriage Act was amended so the meeting was the first opportunity to respond to that change.

“I think it is right to say there is a fair head of steam about this topic, and so I do hope we can have the discussion in a way that is grace-filled and shines a good light on us as followers of Jesus and particularly the gospel we proclaim,” he said.

A church legal body, the Appellate Tribunal, gave its opinion in 2020 that the blessing of same-sex marriages was not inconsistent with the Fundamental Declarations of the Constitution of the Anglican Church of Australia. However, it is up to the General Synod to determine Church practice with respect to the solemnisation of matrimony and to express its view about the appropriateness or otherwise of the blessings of same-sex marriages.

“As part of my response to the Tribunals’ determination I called for restraint until the question of our response to the change in the Marriage Act or the Tribunal’s decision could be considered by General Synod, and on the whole that has happened, which puts us in a better place to have the discussion this week.” the Primate said.

Two resolutions designed to allow General Synod to express support for marriage according to Scripture are to be put forward during Synod.

The Bishop of South Sydney, Michael Stead, who is also a member of the General Synod Standing Committee, called for prayer for the meeting. “This is the first opportunity for the General Synod to express its mind on these matters since the decision of the Appellate Tribunal that opened the door to the blessing of same-sex marriages on a diocese-by-diocese basis.

“Overseas, the blessing of same-sex marriage has led to an irrevocable tear in the fabric of the Anglican Communion. This is not what we want in Australia, and the General Synod has the opportunity, via these two statements, to encourage the dioceses in Australia to remain in step with the teaching of Jesus about marriage.”