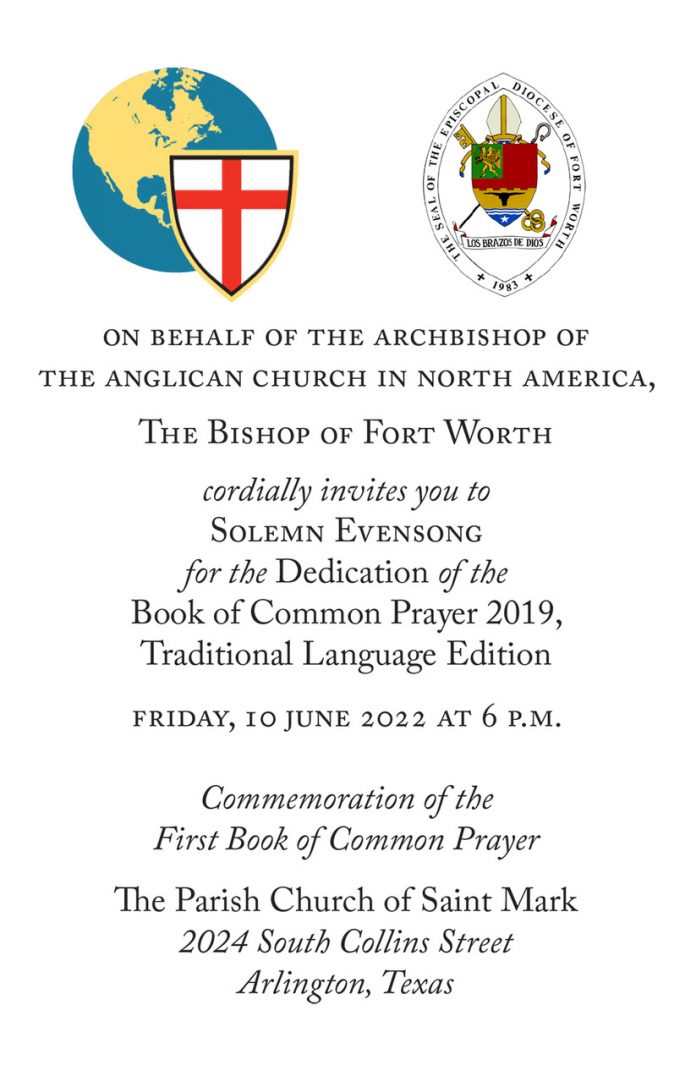 The ACNA’s Book of Common Prayer, introduced in 2019, contains two Eucharistic rites: a contemporary-language liturgy that closely follows the form of the 1979 Episcopal Prayer

Book’s Rite I, and a “Renewed Ancient Text” that compares with Rite II.

Now comes The Book of Common Prayer 2019, Traditional Language Edition (TLE), approved for publication by the College of Bishops in January. This edition is rendered entirely in Elizabethan English familiar to users of Rite I (1979) or Holy Communion (1928) and will be available from the printer in May. An altar book is expected to be available in 2023.

Members of the Diocese of Fort Worth who participated in the development of the book included Fr. Timothy Matkin, Fr. Jeff Stubbs, Fr. Alan Horton, and Fr. Jonathan Kanary. Several congregations in the Diocese have been using the trial text and provided several rounds of feedback.

A service of dedication for this new edition of the Prayer Book will be held Friday, June 10, at St. Mark’s Church in Arlington.

The TLE combines the doctrinal orthodoxy of the 2019 Prayer Book with the historic language of classical prayer books in a complete volume. It is intended to satisfy the great number of congregations who faithfully use Rite I (1979). Yet one of the several downsides to the 1979 Prayer Book is the lack of a complete traditional-language volume. Aside from the Rite I liturgy,

most of the book was rendered in contemporary American English. A priest or parishioner who wants traditional language forms of weddings, visitations of the sick, confessions, etc., ends up having to use something other than the 1979 BCP. Over the decades several volumes were produced for this purpose, including the Anglican Service Book, which incorporated additional Anglo-Catholic material.

The new TLE, bound in rich green to distinguish it from the red-bound 2019 BCP, contains the whole of that book in traditional Elizabethan English, while corresponding page-for-page with the red 2019 BCP’s content.

Another major goal of this project was the maintenance of the people’s piety. We all have prayers we know by heart, such as the Prayer of Humble Access or the Creed, but we trip up

when we encounter a familiar service in unfamiliar language. The TLE endeavors to respect this wherever possible, restoring familiar language that may have been edited for contemporary texts. For example, the words ‘miserable offenders’ have been re-stored to the confession at Morning and Evening Prayer, and the Psalter printed in this book is identical to that of the 1928 Prayer Book. The goal through- out was to ensure that the book was actually useable by congregations and respecting the prayers that many priests and parishioners have memorized from years of faithful use is something key to that goal.

Archbishop Robert Duncan, who chaired the Liturgy Task Force that produced the 2019 BCP, regularly said that the goal was to make this “a prayer book so attractive that people really want to use it,” rather than a prayer book (like the 1979 Episcopal Book) that was imposed from above in many cases.

The same is true of the TLE. It is designed to serve the clergy and people of the Anglican Church in North America, and to ensure that the words which have shaped faithful Anglican Christians for 500 years will continue to form faithful believers for many years to come.