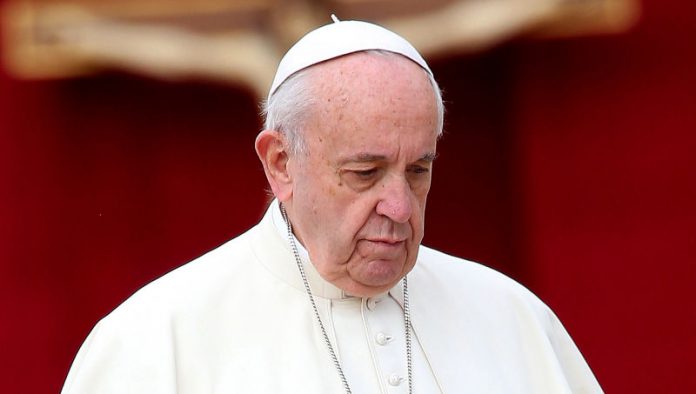 As the war wages on in Ukraine and the massacres continue, Pope Francis has appealed for a truce in the war-ravaged nation this Easter.

During his remarks prior to the recitation of the Angelus prayer this Palm Sunday, the Pope exclaimed, “Let the weapons be put down! Let the Easter truce begin.”

The Holy Father told the 65,000 pilgrims in St. Peter’s Square that as we turn to the Blessed Mother with the Angelus Prayer, we must remember how the Angel of the Lord himself said to Mary in the Annunciation: “Nothing is impossible for God.”

“Nothing is impossible for God,” the Pope repeated.

“He can even bring an end to a war whose end is not in sight, a war that daily places before our eyes heinous massacres and atrocious cruelty committed against defenseless civilians.”

The Pope called on faithful to pray about this, especially in these days preceding Easter.

“Let the weapons be put down! Let the Easter truce begin.”

“But today, there is a war,”  and why try to win this way, “according to the way of the world”, he asked. “This is only the way to lose. Why not allow Him to win? Christ bore His cross to free us from the dominion of evil.”

Christ died, the Pope stated, so that life, love, and peace might reign.

“Let the weapons be put down! Let the Easter truce begin.”

No victory lies in planting a flag on rubble

The truce the Pope is urging, he clarified, is not one “to provide more weapons and pick up the combat again – no!” Rather, he suggested, what is required is “a truce that will lead to peace, through real negotiation, that is even disposed to some sacrifice for the good of the people.”

“In fact, what victory is there in planting a flag on a pile of rubble?”

“Nothing is impossible for God,” the Holy Father reiterated, saying, “We entrust this to Him through the intercession of the Virgin Mary.”

The Pope also said he is near the people of Peru, “who are experiencing a difficult moment of social tension.”

“I am accompanying you with prayer and I encourage all parties to find a peaceful solution as soon as possible for the good of the country, especially of the poorest, respecting the rights of everyone and of the institutions,” he said.

Pope Francis wished pilgrims and young people from various countries, as well as all watching through social platforms, a good Holy Week.