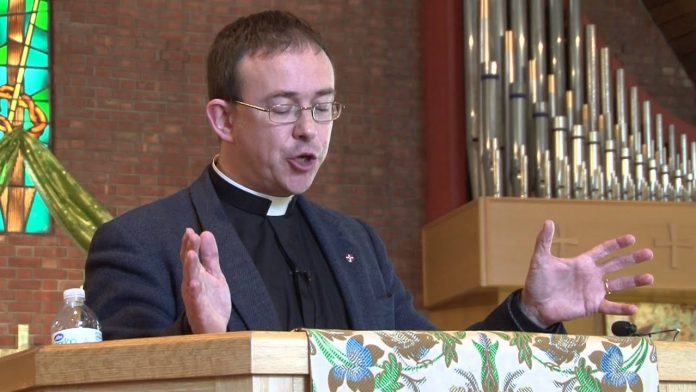 The Revd Dr Lee Gatiss, Director of Church Society and one of the most influential conservative evangelical voices within the Church of England, has published a video laying out six possible options for the Church of England gets ever nearer to settling its position on same-sex marriage and the like.

In a twenty plus minute video released on 3 February, Gatiss identified the six possible options as:
1.) Full acceptance of gay marriage in the Church

4.) No change in doctrine.  Enforcement of proper discipline.

5.) No doctrinal change.  Enforcement of discipline, including internationally.

6.) No doctrinal change. Enforcement of discipline. Call to repentance.

Gatiss said, Option 1— full acceptance of gay marriage in church was “the desired outcome for the Lesbian, Gay, Bisexual, and Transexual (LGBT) groups such as OneBodyOneFaith.”

This option would “mean the Church of England asking the Government to remove the so-called “quadruple lock” in the Same-Sex Marriage legislation, which currently makes it illegal for Anglican churches to celebrate same-sex marriages.  That reflected the Government’s commitment that no religious organisation or representative would be forced to conduct or participate in same-sex marriage ceremonies.”  This would contrary Article 9 of the European Convention on Human Rights which enshrines “freedom of thought, conscience, and religion.”
More importantly, it would contrary, “The Church of England’s official doctrine of marriage as found in Canon B30.”

Option 2: Pastoral Accommodation would acknowledge the difficulty of Option 1 and offer a compromise.  It would see no official changes but room would be made for “pastoral accommodation.”

Gatiss said that this idea “has been presented as a stepping-stone measure by the gay rights movement, and spoken of as a model of ‘good disagreement’.  Pointing out the inescapable, Gatiss bluntly states such “is actually a full scale change in the Church’s doctrine of sin, by stealth.  It celebrates and calls holy that which God call calls unholy—indeed, behaviour which he says excludes people from his kingdom.”

In his opinion, “Options 1 and 2 would inevitably lead to some kind of split in the Church of England if they were pursued.”

Option 3: The Status Quo — “is the default position.  No change in the doctrine of marriage or the doctrine of sin. But lobbyists and activists will continue to push the boundaries and test the limits of existing rules and subvert them wherever possible … “None but the most naive can this status quo option is acceptable or stable as a solution.”

Option 4: No change in doctrine. Enforcement of proper discipline — “This option would keep the doctrine of marriage intact but it would also enforce proper discipline within the Church.” Gatiss points out that, “Currently there is a de facto acceptance of one rule for clergy and another for laity.”

Currently, official guidelines make it plain that access to the sacraments cannot be denied to those who are living in civil partnerships, even if they are sexually active, or to their children. So although they say (quote) “clergy of the Church of England should not provide services of blessing for those who register a civil partnership… lay people who have registered civil partnerships ought not to be “asked to give assurances about the nature of their relationship before being admitted to baptism, confirmation and communion.” The official guidance says the same about same-sex marriages: that while “the same standards of conduct apply to all, the Church of England should not exclude from its fellowship those lay people of gay or lesbian orientation who, in conscience, were unable to accept that a life of sexual abstinence was required of them.

“As far as many are concerned, this is far too spiritually dangerous a situation to be continued. The Bible, and the Thirty-nine Articles, make it clear that those who partake of the sacraments while in such a state “purchase to themselves damnation” (Article 25, alluding to 1 Corinthians 11). No minister of the Church of England should willingly allow their parishioners to make such a purchase!”

He pointed out that the Episcopal Church, USA had exercised discipline against the orthodox for standing against the “liberal agenda for gay marriage”.  Although no definite number has ever been produced, it is estimated that over 700 clergy were defrocked for holding to the biblical and canonical view of marriage.

Option 6:  No doctrinal change. Enforcement of discipline. Call to repentance —

“This final option would include all of options 4-5. It also includes a public call for the revisionists worldwide to repent. The argument here is that it is not simply sufficient to remove false teaching and false teachers from the church, but we must also demonstrate a loving commitment to their ultimate salvation, by calling them back to the one true God, whose ways alone can lead to human flourishing — in this world and the next. As the Book of Common Prayer rightly says, “Almighty God, the Father of our Lord Jesus Christ… desireth not the death of a sinner, but rather that he may turn from his wickedness and live… Wherefore let us beseech him to grant us true repentance and his Holy Spirit, that those things may please him which we do at this present, and that the rest of our life hereafter may be pure and holy; so that at the last we may come to his eternal joy.”

“So we cannot just hope to stay with the status quo on these questions. We must not just resist liberal changes by trying to stand still, but pull hard in the other direction so that biblical orthodoxy can be preserved and promoted instead of soul-destroying, church-emptying error.

“There are a number of committed LGBT advocates on the Church of England’s General Synod, but not as many as is often thought. Groups such as “Affirming Catholicism” and OneBodyOneFaith do not constitute a majority on Synod. There are many clearly opposed to their agenda, and a number of potentially persuadable people in the middle, looking for godly leadership and a positive way forward.

“There is no reason at all to think that the adoption of options 1 or 2 are a foregone conclusion.

“Liberalisation of the church’s teaching and practice is not inevitable. There is no set predetermined trajectory we must follow here. Many LGBTQ activists have a quasi-religious commitment to a view of historical development which sees the ultimate victory of their social agenda as utterly assured. That is why their opponents are always portrayed as “on the wrong side of history.” This is a form of historical determinism so beloved of Stalinist Marxists in the last century. But it is deeply and fundamentally flawed.

“The problem is that many conservative Christians have also bought into the same theory. Too often we believe the propaganda that we are destined to lose political and cultural battles of this sort. We may know that ultimately Jesus will win and truth will prevail — one day. But we are rendered powerless and mute in the here and now, by the sheer avalanche of negative messaging from the world and the worldly church. And so we too readily buy into the idea that theological liberalism is more powerful and attractive and effective. That movement can only happen in one direction.

“But it is not so. The devil is a liar, and the father of lies. He has been doing it for a long time, and is an expert in deception. Yet the word of God is living and active, sharper than any double-edged sword. It is the power of God for the salvation of everyone who believes. If God’s word was enough to create the world, and if by it he sustains all things, surely we must be more confident in the message he has given us for the people of this confused and confusing world? It has divine power to demolish strongholds and every lofty opinion raised against it. So let us take every thought captive to obey Christ, and entrust the outcomes to him. With God, anything is possible.

“As Bishop JC Ryle said a long time ago, “It may be that our numbers may be thinned, and many may desert our cause under the pressure of incessant official frowns, persecution, ridicule, and unpopularity. But we have no cause for discouragement, despondency, or despair. Then let us stand firm and fight on.”