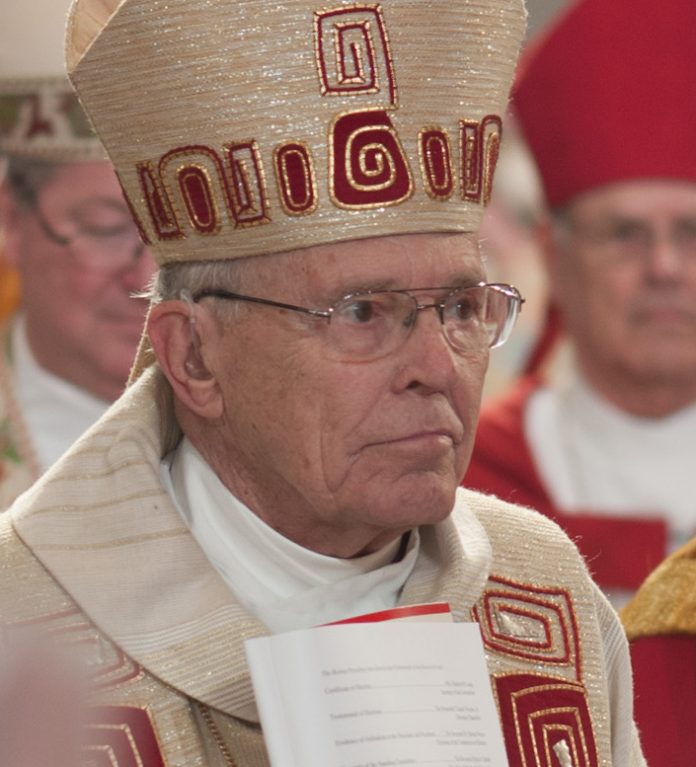 On behalf of Bishop Brewer, it is with great sadness that we share the news of the death of The Right Reverend William Hopkins Folwell on Monday, February 7, 2022 in Hendersonville, North Carolina.   Bishop Folwell was the second bishop of the Diocese of Central Florida, serving in that office from 1970 – 1989.

Born in Port Washington, New York on October 26, 1924, he graduated in 1947 with a Bachelor of Civil Engineering degree from Georgia Institute of Technology. Upon graduation he was commissioned an officer in the Civil Engineer Corps, and served in the U.S. Navy from 1947-1949. Bill and Christine (“Chris”) Elizabeth Cramp were married April 22, 1949. With his wife and their daughter Ann, Bill moved to Chicago where he entered Seabury Western Theological Seminary in the discernment process toward ordination, graduating with a Bachelor of Divinity degree in 1953.  A lifelong learner, he would go on to be awarded two Doctor of Divinity degrees in 1970 – from Seabury Western Theological Seminary and from the University of the South School of Theology. Bishop Henry I. Louttit, Sr., ordained Bill to the diaconate June 22, 1952 and to the priesthood December 22, 1952 in the Diocese of South Florida where Bill served as the Vicar of St. Peter’s Episcopal Church in Plant City (1952-1955).  The Folwells welcomed their son Mark to the family in 1952.  Bill also served as the Priest-in-Charge at St. Luke the Evangelist Church in Mulberry (1954-1955). In 1955 the family moved to Louisiana where Bill became the Chaplain at St. Martin’s School, New Orleans and the Vicar of St. Augustine in Metairie.  In 1956, Bill accepted a call to serve as the Rector at St. Gabriel’s Episcopal Church, Titusville; during his service there, he was elected to be the President of the Florida Episcopal Schools Association, a position he held until 1959. In that year, the Folwells’ third child Susan was born. All Saints Episcopal Church in Winter Park called Bill to be the Rector in 1959, a position he held until his election and consecration as the second Bishop of Central Florida on February 9, 1970. Bill served as bishop until his retirement in 1989.

Bill is predeceased by his wife of 68 years, Chris, and survived by their three adult children and their families.

Visit www.diocese.org where additional information, including funeral service details, will be posted as it becomes available.