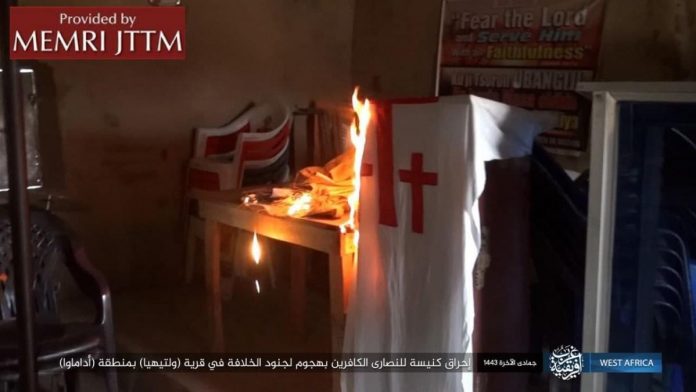 On January 4, 2022, the Islamic State (ISIS) published photos showing its fighters burning a church and property of a Christian community in Adamawa State, northeastern Nigeria.[1]

In an attack on December 30, 2021, ISIS fighters burned a church and other “possessions of Christian unbelievers,” including houses and a vehicle, according to the news report claiming responsibility for the attack, which did not announce any casualties.[2]

Two photos showed the church’s altar cloth in flames, while others showed Christian homes and vehicles in the community engulfed in flames.

Last December, ISIS claimed responsibility for a similar attack on a Christian community in neighboring Borno state, reportedly killing a Nigerian solider and burning a church and several houses.[3]

Around the same time, the pro-ISIS Al-Murhafat Foundation released a poster celebrating ISIS attacks on Christian homes in Nigeria and Mozambique. The poster referenced the Qur’an, Hadith, and Islamic jurisprudence in an attempt to justify such attacks on Christians.[4]