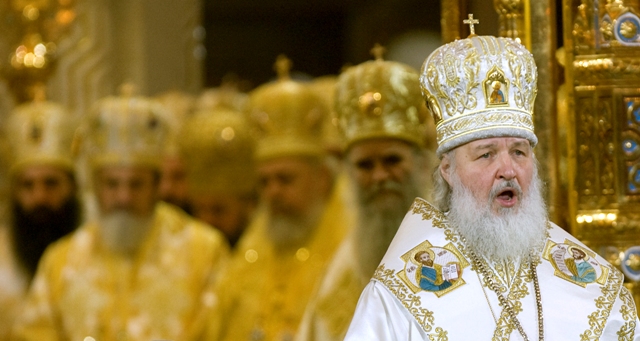 “The anxiety of His Beatitude Patriarch Theophilos is very сlose to our heart,” stated His Holiness Patriarch Kirill of Moscow and All Russia, commenting on the problem of preserving the Christian presence in the Holy Land, the urgency of which had been raised by the Primate of the Orthodox Church of Jerusalem in connection with the actions of radical Judaist groups striving to expel the Christian community from Jerusalem and its suburbs.

“The background of this situation is well known to us, and we also know about all the difficulties confronting the Church of Jerusalem,” His Holiness Patriarch Kirill pointed out in his traditional Christmas interview on “Rossiya” TV channel. “We are in solidarity with His Beatitude, we support him and will undoubtedly stand up for the Patriarchate of Jerusalem and for the retaining of its property.”

The ownership by the Patriarchate of Jerusalem of a number of pilgrim houses in the Christian Quarter of Jerusalem is unjustly contested by Jewish radical public organizations. In case these buildings go to the radicals, the millions of Christians coming to Jerusalem every year would be denied access to the so-called pilgrim’s road starting from the Jaffa Gate of the Old City and leading to the Church of the Holy Sepulchre; thus the pilgrims would no longer have the right of following this route to the greatest shrine.
His Holiness Patriarch Kirill underlined that radicalism artificially fueled by religious ideas is tremendously dangerous and that “humanity has been suffering from the religious wars throughout centuries.”

The Primate of the Russian Orthodox Church pointed out that Christianity was a world religion, and since the greatest commandment for Christians is to love the Lord your God and your neighbour as yourself (see Mk 12:30-31), Christian ideas cannot go along with radicalism. “We hope that our message will be willingly embraced by all to whom it is addressed,” underscored Patriarch Kirill.

His Holiness asserts that any manifestation of radicalism and fanaticism in interreligious relations is very dangerous not only for the Holy Land, but also for other regions of the world. He said: “The Russian Orthodox Church, therefore, has always been in favour of dialogue, including the dialogue with representatives of other religions with the aim to look for common positions and to forge a shared approach to the current developments in the world and in interreligious relations. We attach great importance to this work.”

Representatives of Christian Churches participating in an action held on the night of December 9, 2021, spoke about the necessity of preserving the status quo of the Old City of Jerusalem and especially of the so-called pilgrim’s road. His Beatitude Patriarch Theophilos III of Jerusalem and All Palestine addressed the participants of the action.