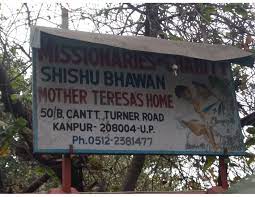 Lucknow (AsiaNews) – The Missionaries of Charity in the Indian state of Uttar Pradesh,have been forced to close one of their homes for orphaned children because of an eviction ordered by the Indian Ministry of Defence. The New Year, which had already begun for the Sisters of Mother Teresa with the revocation of their license to receive donations from abroad, thus continues with another serious obstacle to their activity advanced by bureaucratic means in one of the more than 240 centers for orphans managed by the religiousin India.

On January 3, in the district of Kanpur, the Missionaries of Charity were in fact forced to suspend the activities of the local Shishu Bhawan, one of the homes where they welcome abandoned children in a gesture that everyone immediately associates with the memory of Mother Teresa.The eviction was ordered by  the Indian State Property Office: the structure rises, in fact, on land that had been sold to a private individual with a 90-year concession that expires in 2019. It would then have been this private individual to cede it to the Sisters of Mother Teresa in 1968 to open the orphanage. Now, however, the office of the Ministry of Defense that manages state property does not want to renew the concession; and in addition, it also asks the sisters to pay a fine of 20 million rupees (about 240 thousand euros) for using the structure in the last two years. An economic threat that – together with the uncertainties caused by the blocking of donations from abroad – would have led the Missionaries of Charity to choose not to take legal action to resist the decision, handing over the structure to the State.

“In the last 53 years – recalls the Indian Catholic Forum – the Shishu Bhawan of Kanpur has welcomed and helped secure adoption for 1,500 children according to the rules of the law. It has also offered help to thousands of other poor people such as lepers, abandoned mothers, children of migrants working on construction sites. The State Office seems unwilling to see the selfless service offered by the sisters to anyone in need, regardless of caste or creed. The last 11 children who remained in the facility were transferred to the Shishu Bhawan in the cities of Allahabad, Varanasi, Bareilly and Meerut. But what will happen to the 1,500 families who adopted children from this center? For them this structure was like a Nanihal (grandmother’s house), while for the orphans who grew up there and are now married, the Shishu Bhawan was the family home”.

The bishop of Lucknow Msgr. Gerald Mathias commented to AsiaNews: “I am deeply saddened by this news. Had it been desired, the concession could certainly have been renewed since the sisters took care of orphans and abandoned, serving the poorest of the poor. Despite Mother Teresa’s international fame, neither the government nor the army showed any understanding or support for this facility and were happy to evict her. The Missionaries of Charity in recent times have been targeted in Gujarat and Jharkhand; then came the revocation of the license for donations from abroad: these are all episodes that point to a dangerous path. They attack Christians because they are a peace-loving community. We can only hope that common sense will prevail and the situation will improve.

In the meantime, legal proceedings are continuing against the Missionaries of Charity’s house in the State of Gujarat,, accused of “forced conversions” among girls and “offending Hindu religious sentiments. The court in Vadodara has asked the police to “refrain from arresting” the nuns at least until January 10, the date by which a new hearing on the case is scheduled.