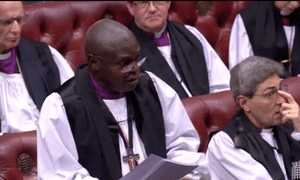 My Lords, I, too, thank my noble and learned friend Lord Brown for his powerful speech, which is still ringing bells of challenge in my ears.

On 6 January 1941, the President of the United States of America, Franklin Roosevelt, addressed Congress on the state of war in Europe. At the close of his address, he said that he looked forward to

“a world founded upon four essential human freedoms”, which he named as freedom of speech, freedom of worship, freedom from want and freedom from fear. These words are still remembered but the ideals have not been realised anywhere in the world.

In this debate, we are invited by the most reverend Primate the Archbishop of Canterbury, given the contemporary challenges to freedom of speech, to map out the role of the public, private and civil society sectors in upholding it. In a book of essays I edited in 2015, On Rock or Sand? Firm Foundations for Britain’s Future, I referred in my introduction to two noble and learned Law Lords. It is still my view that what they offered us is not sand but rock—that is, firm foundations that would enable us and the public, private and civil society sectors to uphold freedom of speech.

First, in his book, The Rule of Law, Lord Bingham has a beautiful translation of the Magna Carta, from the Latin into English. Clause 39 states:

“No free man shall be seized or imprisoned, or stripped of his rights or possessions, or outlawed or exiled, or deprived of his standing in any other way, nor will we proceed with force against him, or send others to do so, except by the lawful judgment of his equals or by the law of the land.”

“To no one will we sell, to no one deny or delay right or justice.”

Those words from the Magna Carta were written 800 years ago, and echo the law and prophets of the Hebrew scriptures.

Lord Bingham’s examination of the meaning of the rule of law makes clear that it is not an arid legal doctrine but the foundation of a fair and just society, a guarantee of responsible government and an important contribution to economic growth, as well as offering the best means yet devised for securing peace and co-operation. He advocates eight conditions that capture its essence, as understood in Western democracies. Today, I will give four of them:

“The law must be accessible and so far as possible intelligible, clear and predictable … Questions of legal right and liability should ordinarily be resolved by application of the law and not the exercise of discretion … The laws of the land should apply equally to all, save to the extent that objective differences justify differentiation … The law must afford adequate protection of fundamental human rights.”

“is one of the greatest unifying factors, perhaps the greatest, the nearest we are likely to approach to a universal secular religion. It remains an ideal, but an ideal worth striving for, in the interests of good government and peace, at home and in the world at large.”

It is key in freeing and energising us all, in the public, private and civil society sectors, to uphold freedom of speech with cheerfulness and hope.

For me, justice goes beyond the simple administration of laws. Justice is possible only when law, religion and morals are intermingled. I call my second witness: the noble and learned Law Lord, Lord Denning, to whom I also referred in On Rock or Sand?. Lord Denning wrote in The Changing Law in 1953 that the severance of law from morality, and of religion from law, has made many people

“think that religion and law have nothing in common. The law, they say, governs our dealings with our fellows, whereas religion concerns our dealings with God. Likewise, they hold that law has nothing to do with morality. Law lays down rigid rules which must be obeyed without questioning whether they are right or wrong. Its function is to keep order, not to do justice … Although religion, law and morals can be separated, they are nevertheless still very much dependent on one another. Without religion, there can be no morality, there can be no law.”

Rabbi Lord Jonathan Sacks, in his book Morality: Restoring the Common Good in Divided Times, published in 2020, argues that

“there is no liberty without morality, and no freedom without responsibility … all of us must play our part in rebuilding our common moral foundation”— the kinds of things we heard from the noble and right reverend Lord, Lord Harries. The book goes on to say that

I ended the book On Rock or Sand? Firm Foundations for Britain’s Future with these words:

“Individualism and consumerism are sand. Freedom, Fellowship, Service for God and neighbour, and the Rule of Law are rock. These are the firm foundations for Britain’s future.”