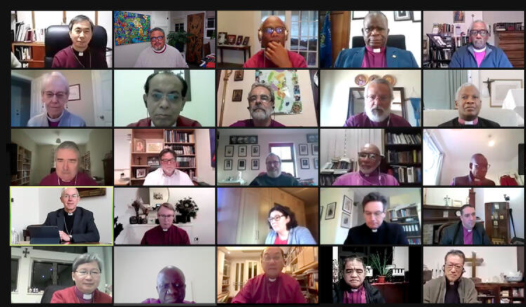 As the Primates of the Anglican Communion met online over two days last week they began by remembering with thanksgiving their brother Primate Archbishop Fereimi Cama and lamenting his death in July this year.

Archbishop Don Tamihere reflected that all of the Anglican Primates are feeling the absence of their brother and colleague Archbishop Fereimi, who was a well-respected leader among them. He sensed they will especially miss Archbishop Fereimi’s character as a leader, his insights from Oceania and his leadership in promoting work in climate resilience.

“Archbishop Fereimi brought a lot of wisdom to that space, because it is the lived experience of the Diocese of Polynesia. For him it wasn’t simply about holding a meeting and producing a communiqué. It was about the health and wellbeing of his people.”

The meeting went on to discuss some of the climate themes that were close to Archbishop Fereimi’s heart as they shared stories from different provinces where Anglican communities live and minister to people suffering directly from the impact of extreme weather events and sea level rise.

“Climate change is a present reality for many, and we have witnessed that it affects most severely those who are already vulnerable.” said the Primates in their communiqué.

The Primates also heard the testimonies of indigenous peoples in Canada losing their land to wildfires, of small island nations at risk from rising sea levels and of increasing flooding and cyclones in places like Mozambique.

The Archbishop of South Sudan, Most Rev Justin Badi Arama shared the realities facing his people after catastrophic recent flooding in South Sudan, where at times half the country had been underwater due to the effects of climate change.

The Primates then lined up in solidarity with the Anglican Communion’s official delegation to the United Nations’ 26th Conference on Climate Change (COP26) earlier this month, which was led by a team including the Archbishop of Canterbury, and other Anglican environmental and indigenous leaders including Archbishop Mark MacDonald.

The Anglican COP26 team reported that the conference had produced a ‘wholly inadequate’ set of promises that were not undergirded by practical steps to reduce carbon emissions to sufficiently slow global temperature rise.

The Anglican Primates also highlighted the need for richer nations to share climate finance to enable developing countries to move away from high carbon economies.

“We call on the nations and governments of the world to redouble efforts to reduce global temperature rises and to provide a just finance package to enable and accelerate the transition to a lower carbon world.” urged the Primates’ meeting communiqué.

The Primates discussed the role of faith communities in offering advocacy and example on climate justice, not only through the local efforts of their churches, but through the Anglican Communion Environmental Network’s global initiatives, such as the 2020 “Prophetic Indigenous Voices on the Planetary Crisis” Advent webinarsand its annual Season of Creation.

They went on to highlight the role of the Communion’s new scientific research and advocacy group, the Anglican Communion Science Commission, which is supporting the Church to monitor scientific developments connected with climate justice and pandemic response.

Still focused on creation, the Primates reaffirmed the valuable role that all religious traditions can play as protectors of creation – through helping people lobby power brokers, as well as renewing their own relationships with the natural world.

“We call on faith actors to advocate for urgent, bold climate action and to transform hearts and minds away from destructive attitudes and behaviours towards responsible care for God’s creation.” they wrote.

Finally the Primates gave thanks that Anglican bishops have been able to meet online in the lead up to the Lambeth Conference, which is scheduled to take place in the UK in late July-August 2022. They now look forward to ongoing Communion-wide discussions in 2022 via the ‘Ministry in a conflicted world’ series.

The next Anglican Primates’ Meeting will take place in Rome in March 2022.