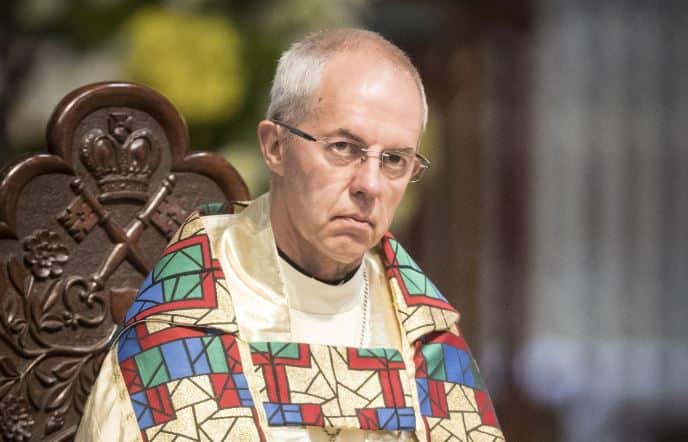 The Archbishop of Canterbury has apologized for comparing those who do not agree with his views on climate change to politicians in the 1930’s who ignored the rise of Nazi Germany.

In a statement published on twitter on 1 Nov 2021, the Most Rev. Just Welby wrote:

“I unequivocally apologise for the words I used when trying to emphasise the gravity of the situation facing us at COP26. It’s never right to make comparisons with the atrocities brought by the Nazis and I’m sorry for the offence caused to Jews by these words.”

His statement came in response to criticisms from Jewish leaders and the media for comments he made earlier that day in an interview with BBC Radio 4. He stated political leaders “will be cursed if they don’t get this right”.

“[P]eople will speak of them in far stronger terms than we speak today of the politicians of the 30s, of the politicians who ignored what was happening in Nazi Germany because this will kill people all around the world for generations, and we have will have no means of averting it”.

The archbishop lambasted those who do not agree with his views on climate change charging them with being potentially responsible for genocide. Inaction on climate change “will allow a genocide on an infinitely greater scale” than the persecution of Europe’s Jews by the Nazis and their allies.

“I’m not sure there’s grades of genocide, but there’s width of genocide, and this will be genocide indirectly, by negligence, recklessness, that will in the end come back to us or to our Mr Welby had told Kuenssberg that world leaders “will be cursed if they don’t get this right”.

“I’m not sure there’s grades of genocide, but there’s width of genocide, and this will be genocide indirectly, by negligence, recklessness, that will in the end come back to us or to our children and grandchildren.”

The archbishop said he saw the debate in black and white terms. It “is absolutely a moral issue”.

He told BBC Radio 4′ “This is our neighbors all around the world, those who are already suffering catastrophic impacts, this is life or death.”

If world leaders were successful at the Glasgow COP26 conference, it would give “confidence to the poorest in the world and to voters in the global north that this is achievable.

“That’s what success looks like – that steps have been taken that mean that we will get to the 1.5 degrees target. That is doable,” the archbishop said.

The reaction to the archbishop’s comparison of those who do not accept his view of the science and economics around the climate change debate as being on the same moral plane as those responsible for the planned and systematic murder of six million Jews prompted the archbishop to issue an apology.

COP26, which began Sunday, has brought leaders from around the world to Glasgow to discuss efforts to fight climate change and curb its effects.