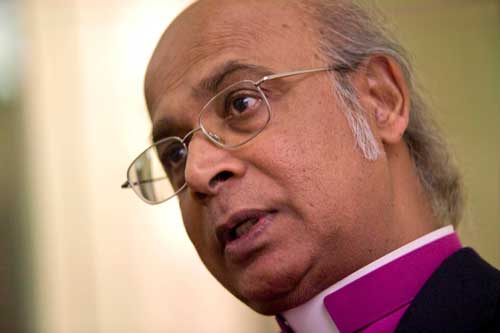 Theology, the study of the knowledge of God, really does matter.  What one believes in this regard actually has eternal consequences.  Sadly, there are many in leadership positions within the Church of England and broader Anglicanism that fail to understand the importance of the matter.

Last week, the ecclesiastical world in the UK was thrown into a tizzy by the news that the former Bishop of Rochester, Michael Nazir-Ali (MNA) has decided to defect to the Roman Catholic Church. Indeed, the former bishop had already been received into the fancifully named, Personal Ordinariate of Our Lady of Walsingham under the Patronage of St John Henry Newman on 28th September, the Eve of the Feast of St Michael & All Angels.

He will not remain a layman in his new ecclesial community. He is to be ordained a Roman Catholic priest. This is most problematic for those who had heretofore lionised MNA as a paragon of biblical orthodoxy.  Why?  Because Rome severely departs from biblical revelation at numerous points.  Whatever happened to the English Reformation?

For decades, under oath, MNA has served in accordance with the Formularies of the Church of England.  These Formularies, under the authority of Scripture, (namely the Three Creeds, the Thirty-nine Articles of Religion, the BCP and Ordinal, and the Homilies)expressly repudiate each of those reasons for anathematisation.  For decades, MNA ordained people to the offices of Deacon and Presbyter, and officially required those being ordained to live and serve under the definitions of those Formularies.  For years, he had been considered a steady, measured, and capable hand in providing intellectual defence to those distinctives for those remaining within the Church of England and those within the GAFCON provinces.

Now, he pivots and walks away to teach the opposite.  We should hope and pray that he comes to a better mind and recant. After all, this is what paragraph 13 of the Jerusalem Declaration advises: “We reject the authority of those churches and leaders who have denied the orthodox faith in word or deed. We pray for them and call on them to repent and return to the Lord.”

MNA explains that one of the attractions of the Roman Catholic church is the clarity of its teaching. When did clarity trump biblical faithfulness? Why did the apostle Paul have to write to the Colossian Christians “so that no one may deceive you by fine-sounding arguments”? Whatever problems these false teachers presented, it certainly wasn’t down to a lack of clarity in their teaching!

However, worse than MNA’s biblical infidelities were the responses from the Archbishop of Canterbury, the Archbishop of the ACNA and Chairman of GAFCON, and of GAFCON-GB and Europe.  Each has treated his departure as a matter of complete theological indifference.

Their responses are nothing short of abysmal.  They smack of the “lying prophets” of Jeremiah 23.  Those unfaithful men told the people of God that all was well when it was not.  These leaders act like there is no distinction between biblical truth and Romish error—that all is well, when it is not.