Editor’s note: The rector of St Mary of Bethany Parish in Nashville, TN, the Rev. Danny Bryant has written to his congregation informing them their parish council, or vestry, has voted to withdraw from the Anglican Church of North America’s C4SO diocese and is joining the Communion of Evangelical Episcopal Churches due to theological disagreements with the ACNA’s stance on same-sex blessings. The CEEC’s progressive stance on human sexuality issues is a better fit for the church writes Mr. Bryant.

To St Mary of Bethany church:

A difficult, consistent, and present truth within normal Christian life is that in order for us as Christians and as Christian communities to bear more fruit, Jesus prunes us (John 15:1-2). Eleven years of serving in pastoral ministry has been filled with both the relief of this truth and the accompanying sadness and pain that accompanies the pruning process.

Over the past year Bishop Todd Hunter and I have been discerning, along with the staff and parish council, whether St. Mary’s might be in a season of pruning from the Anglican Church in North America (ACNA) to be planted in a place where we can do the work that we feel the Holy Spirit calling us to do. During this discernment, we have had many moments of gratitude and joy about the fruit that has grown while being part of the ACNA while acknowledging some foundational differences between our vision and calling that signify a need for a thoughtful change in affiliation.

From our beginning we have attempted to cultivate hospitable space for the displaced. We are named for St. Mary of Bethany whom Jesus met with tears of solidarity when she brought her anger and feelings of betrayal to him at the tomb of her brother Lazarus. We are a community living in the tensions, questions, and doubts of faith hoping to wake up and receive the joyful promise that the meek inherit the earth and the kingdom of heaven belongs to the poor in spirit. We exist as a kind of field hospital rooted in the Beatitudes where humans are invited into a healing process of restored human dignity that doesn’t deny fear or grief, but asks how God is present in their midst. It is a vision dependent on rest and retreat.

The ACNA’s emphasis that the world is in need of a church that is “always moving forward” to “extend” and “advance” God’s rule with “boot camp” training and preparation is a fundamental difference in posture that does not align with the vision of St. Mary’s of Bethany. In fact, it is a posture that many who come to our community are seeking healing and recovery from. To that end, this discernment process has led to the mutual and peaceful conclusion between St. Mary’s and the ACNA that we should end our affiliation in order to produce the fruit of each one’s calling without draining each other’s nutrients.

Our council voted 9-0 to leave the ACNA, and I have transferred the orders of my Ordination to The Diocese of St. Anthony in The Communion of Evangelical Episcopal Churches (CEEC). We wish our brothers and sisters in the ACNA, and our former diocese C4SO, peace as they discern and live out their vocation in the world. And we honor the work we have done together over the past seven years.

The Communion of Evangelical Episcopal Churches is a communion of worldwide Anglican/Episcopal Christians, so we will remain a community affiliated with Anglican/Episcopal tradition. For now, we are discerning whether St. Mary of Bethany is called into a full communal entry into the Diocese of St. Anthony, but my ordination has already transferred, so we are affiliated with this communion and I am under the care and authority of a bishop.

The CEEC is an international communion in the Anglican/Episcopal tradition firmly committed to living in Jesus’ prayer from the night before he died, “that they may be one.” Our worship will remain liturgical and our theology remains rooted in the creeds, sacraments, and scripture. In one respect, if we hadn’t made this announcement very little would be recognizably different in our Sunday gatherings.

I want to emphasize we do not believe the CEEC or the Diocese of St. Anthony has unlocked perfection and we are not in pursuit of being a completed and flawless church. We resonate with its admission that the church’s beauty is found more in its willingness to belong to one another while naming differences that exist outside of the creeds than its willingness to divide over these differences. I believe our current societal culture wars desperately need communities committed to one another in the midst of fragmented understanding of the world and the confession that healing comes through admitting we are fragmented instead of the denial of our fragments.

Our Own Call – Living in the Tensions & Resurrection

I have always felt called to provide a place for the displaced at the feet and table of Christ here at St Mary’s. As part of our community, I hope you have experienced that and felt called to be a part of that work.

One group of people who have been displaced by the culture and church at large that has felt a place at St. Mary of Bethany Parish since the very beginning is LGBTQ+ Christians. As we have embodied this call to be a place for the displaced our LGBTQ+ membership has continued to grow. We have Christians, both gay and straight and covering a wide range of ages, who have come to different conclusions and convictions over the ethics of same sex marriage in ways that would surprise many people in our community. We are living in a time where this conversation has split, or is splitting, every denomination and tradition. Pastors I am in relationship with daily grieve over what this is doing to individual relationships, churches, and entire communities.

Meanwhile, we confess together each week belief in the holy catholic (universal) church. The holy catholic church (as well as the Anglican/Episcopal tradition) lacks a uniform conviction in this conversation. I believe that frees St. Mary’s to be a community that admits we lack uniformity rather than pretending it exists.

My vision for this community is not for it to be a place where everyone must have the same belief over the theological ethics of marriage, but rather that we would be a place where people who confess the resurrected Christ as Lord can come to the Christ’s table in love while working together for fidelity and just mercy in our neighborhoods. I also believe that the Holy Spirit is already doing this work within the holy catholic church which exists physically and mystically throughout the world in both time and space. Again, we are simply choosing to name this work and cooperate with the Holy Spirit rather than allowing it to exist in the shadows.

I have decided to stop being the officiant at weddings in order to maintain a peaceful compromise. I will gratefully accept invitations to anyone’s wedding who wants me to be a guest. I will miss officiating marriages, but believe this sacrifice is one I can make to loosen the knot around this conversation so that sober movements of peace and love can be taken.This conversation is not as divisive in many other countries as it is in America and I believe we need some distance from the intensity in order to restore fidelity to one another.

The council has voted 7-2 to allow gay Christians who are not necessarily called to celibacy and nominated by the church to serve on the parish council. On one hand, I am thankful this vote wasn’t unanimous. The 7-2 vote is an example of what we are actually trying to be (and have been) as a community; one willing to name our different convictions regarding interpretation of scripture and this sexual ethic and not demanding everyone conform to the same conclusion or pretend that they do.

In reference to the first section of this letter, this is space that is valued and named within the CEEC and Diocese of St. Anthony, but that is not permitted within the ACNA. This move also gives us more space to work together in pursuit of our calling through the Holy Spirit with other denominations, congregations, and traditions than would be blessed if we remained within the ACNA as a church.

Christ’s resurrection gives us permission to live in these tensions with love while being united in Christ through the mystery and the creeds. Rowan Williams writes, “…believing in the resurrection and the new creation, the new age, the final phase of God’s action, means that those who relate to him as a contemporary, not as a memory, as a reality over against them, not just in their heads and thoughts, are being drawn to stand with Jesus in his present life, the life he now lives to God. And that’s why the Church speaks of Jesus as ‘God with us’ – alive and active in all that we say and do in response to his presence with us through the Spirit.”

Whenever two or three gather in the name of Jesus, the crucified God who is the judge of the universe, is with us as we work out our own salvation with fear and trembling knowing God is working in us for his purpose in the creation. The resurrection gives us the freedom to be brothers and sisters in this family. We can give each other space to ask these questions with integrity and freedom. We can admit there are questions we have that others don’t have, conclusions we come to that others haven’t come to, and experiences we’ve had that others have not had. This is the humble condition of being a limited creature and the hope of being healed.

Another harsh reality of the pruning process is that branches that are pruned die and are burned. I was inspired two weeks ago when a friend sent me this picture of new grass growing where seeds had been scattered in a little fire he started to burn pruned shrubs. 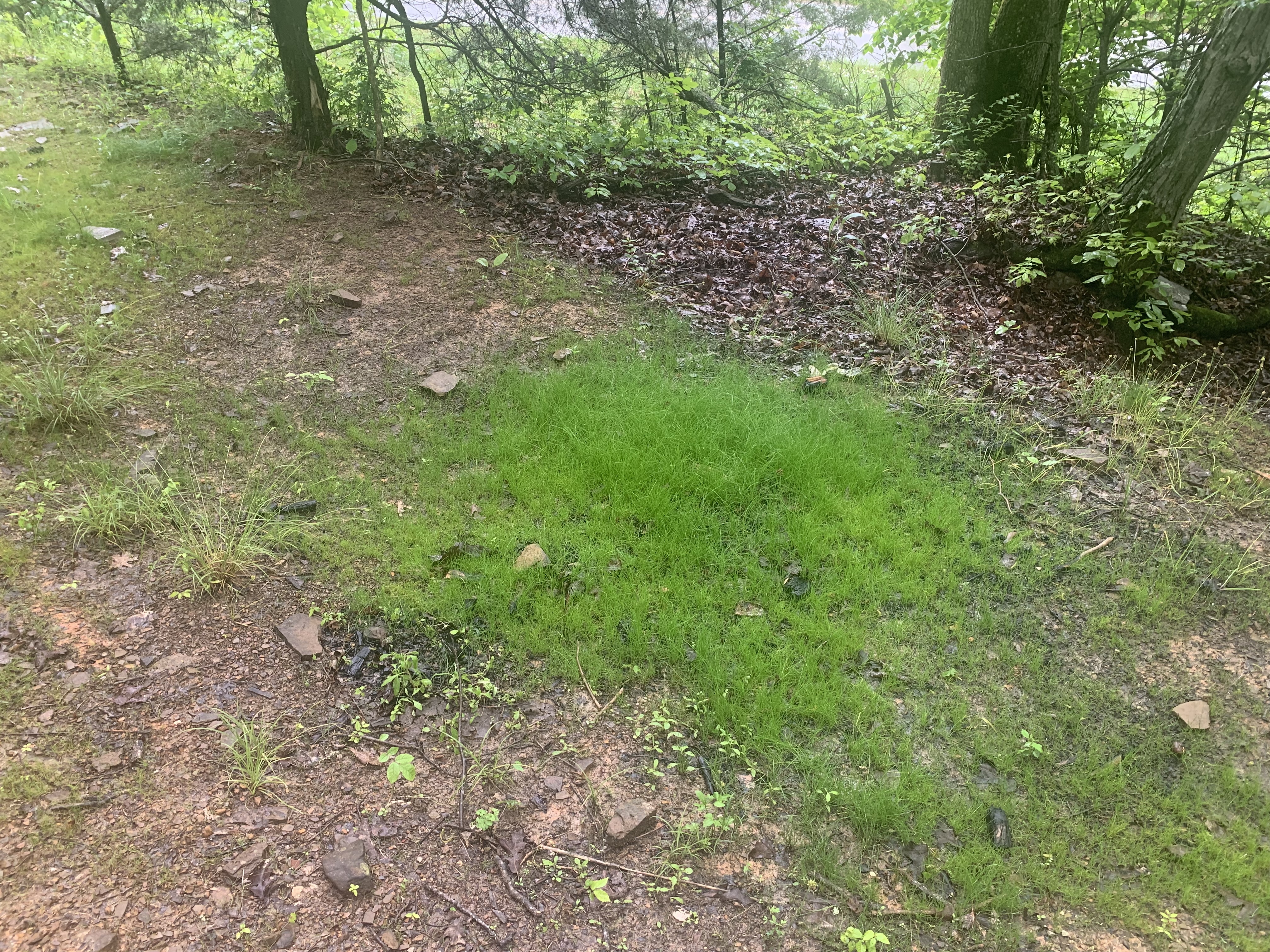 In one sense, there is a death in this pruning process we feel called to undertake. Jesus does not promise that his pruning will not be painful. He does promise that he does it to increase our fruitfulness and that he will be with us throughout.

Thankfully, this death and resurrection is the way of Jesus. I believe we will see new growth from the seeds being scattered and planted in this move.

As always, I am available to speak with you about this. Our community will understandably and justifiably have questions and emotions about these decisions. We will take time during our annual meeting in the upcoming weeks to address these changes further and answer any questions that have answers.

Thank you for being a part of the St Mary’s community and for taking the time to engage with letter.