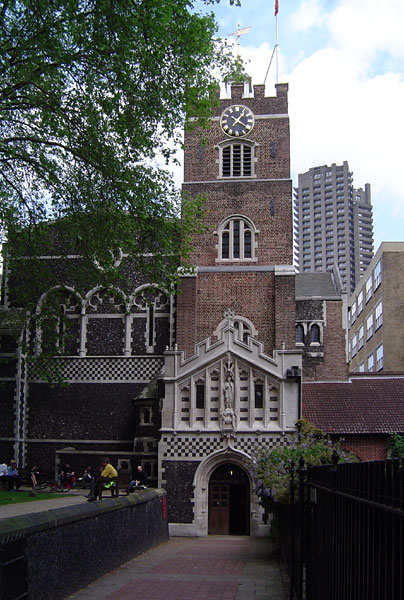 Smithfield’s in London, where the church of St Bartholomew’s the Great was built, is used to being at the centre of significant events.

The Norman, Lord Raherne was one of Henry I’s favourite courtiers. After a series of crises he made a pilgrimage to Rome to sort his life out. He fell seriously ill while there and prayed to God for help. To his great surprise one of the apostles appeared to him in a vision to commission him for the rest of his life’s work.

“I am Bartholomew who have come to help thee in thy straights. I have chosen a spot in a suburb of London at Smithfield where, in my name, thou shalt found a church.”

On getting back to London he headed straight for Smithfield and by the time of his death in 1145, he had built a church and a hospital.

Two hundred years later in 1381, there was more excitement in Smithfield. Wat Tyler, and the uber-radical priest John Ball arrived there at the head of an army of working men, known rather disparagingly as ‘The Peasants’ Revolt’. They had a face to face meeting with the King, Richard II at Smithfield where they explained their complaints at how badly the realm was being run.

So perhaps we should not be surprised that, walking in Fr John Ball’s footsteps, the present vicar of St Bartholomew’s has convened a protest movement to complain and protest at how badly the Church of England is being run.

The Rev Marcus Walker became alarmed when he read the contents of a paper recently produced by a think tank inside Church House, the C of E’s HQ. Released at a recent committee meeting in York, it set out the new vision and strategy for the Church. It claimed to be to “sharing again the big vision…of being a Jesus Christ shaped Church.” Its aim was to create 10,000 lay-led churches over the next 10 years.

Engaging in some creative lateral thinking, it decided the way forward might best be found by dreaming up a new model of ‘Jesus shaped Church’ which freed itself from these key limiting factors. It would rely on laity rather than clergy, front rooms in homes rather than churches, and since there were rules restricting Holy Communion to ordained ministers, dispensing with Holy Communion. An added bonus would come in not having to fund expensive training programmes for vicars, since they would be replaced by the host and hostess of the front-room church.

If you set aside the serious, provocative and disputed question of what it is that constitutes the Anglican church in the first, and concentrate on the issue of money rather than ecclesiology, there is a certain strategy to this lateral thinking.

On coming to office, Justin Welby employed his finely-honed managerial skills to try to get access to the well-stocked coffers of the Church to increase his resources. The Church Commissioners have control of eye-watering sums of money. Their assets come to more than eight billion pounds. But for complex historical reasons, they can’t access them for the day to day running costs of the parishes. They can however be tapped for significant sums for a variety of one-off projects.

So it seemed a no-brainer for the Welby management to come up with fresh schemes that might both refresh the mission of the Church, sidestep the awkward shadow of Anglican history, buildings and culture, and release some of the eight billion to do it. Cue ‘the new Jesus shaped Church’- a new project.

But now that you have your new generously-funded wineskins of ‘coffee-table Christianity’ in four to five bedroom houses with large knocked through living rooms, what do you do with the too few but expensive clergy and too many but expensive churches?

Marcus Walker and his gathered protesters had begun to develop a suspicion that they were just going to be sidelined and slowly slip into heritage hobby land and be mothballed.

Speaking up for the weary foot-soldiers of the Church of England who bear the whole weight of the historic buildings and parishes on their under-resourced backs, Mr Walker launched the movement ‘Save the Parish’.

The erudite spokespeople for this new protest movement reminded themselves, and their audience, of some of the mistakes in governance of the last few decades: the rather lacklustre house of bishops, monochrome in their socialist politics and uniform in their preference for management-speak over traditional spirituality, has long irked the ever-patient churchwardens and members in the pews. The gap between the clergy and the people in the C of E over support for Brexit, for example, ought to have raised a cacophonous alarm.

But it was dispiriting for them, as it must have been for so many, to be told that what might be described as the spine and vertebrae of the C of E – churches and clergy – were seen as limitations and not gifts and resources.

The new vision from the committees raised some very pressing questions. If 10,000 new churches can be planted, maintained, nurtured and run under lay leadership, what is Anglicanism, and how is it different from the house church movement?

Having a vision for a new way of doing church would be more impressive had it included a way of renewing, as well as funding the old way of doing Church; and had a coherent ecclesiology that linked them.

And beyond that there are two very serious challenges to the C of E.

The first is whether it has taken the right direction in trying to baptise secular culture, in particular its understanding of sex and identity, into an understanding of Christianity that is so broad that it finds itself more and more at odds with the contents of the Bible.

And the second has to do with being the national Church facing a post-Christian culture.

How do you justify claiming that your parishes are there for ‘everyone’, and that everyone’s default religion is C of E, when it is uncomfortably evident that the majority of the country are either too ignorant of the faith to care, or have actively repudiated it?

If a gap opens up between secular hedonistic culture and the teaching and practice of Christianity at what point does a Church disassociate and distance itself from the zeitgeist? At what point does it call the society it has pastoral and prophetic care for, to turn and take another direction?

St Bartholomew’s in Smithfield began as a Catholic enterprise with a miraculous healing and a miraculous vision.

If the experience of the Catholic Church today has anything to teach the rest of the Christian community, the key to renewal may well lie in miracle and vision. Young people are drawn in greatest numbers to liturgies and churches that celebrate the Latin Mass; that have a renewed emphasis on the power and awe of transcendence, the clarity and order of hierarchy, the sweet scent of moral fidelity and the miraculous in the mass.

As Jordan Peterson has put it in different contexts, when growing chaos unbalances social dynamics to dominate a culture, the virtue of order becomes an antidote many people increasingly long for.

If the new protesters of Smithfield are to achieve anything at all, it might be to stimulate the Church of England not only to rethink its new well-funded but perhaps fantasy theology, but to re-evaluate the ever-widening gap between Christian and secular culture.

It needs to be able to judge at what point the Church has to reinvent itself as an antidote to dis-ease instead of acting as a non-judgemental, spiritualised therapeutic agency of the increasingly unsympathetic and hostile state. It may also need to recalibrate the awe of transcendence and the convenience of the immanent.