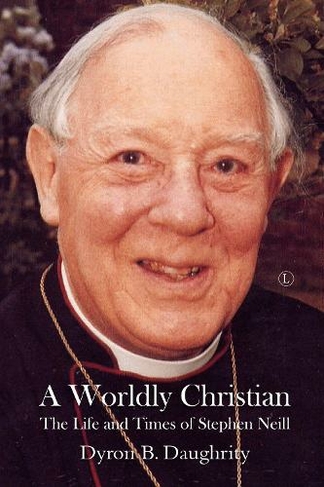 There is a new and fascinating biography out about Bishop Stephen Neill (1900-1984). ‘A Worldly Christian’ is a meticulously researched and referenced book by Dyron B. Daughrity, Professor of Religion at Pepperdine University in Malibu, California, published this year by Lutterworth Press.

Daughrity describes Neill’s life as ‘a tumultuous one’; both his parents were missionaries and following his father’s ordination the large family moved frequently. Despite an unstable and nomadic childhood – the children were looked after ‘by a series of nannies and governesses’– Neill’s upbringing was ‘thoroughly evangelical: family prayers, Bible memorisation and recitation, unwavering faithfulness in attending church services.’ Eventually settled in Dean Close, an evangelical boarding school in Cheltenham, Neill found this ‘a consistent place to call home’ noting in his own autobiography his approval of the use of the cane which ‘certainly did me no harm’, a practice that Neill later adopted in his adult ministry. Clearly academically brilliant both at boarding school and then at Cambridge where he won numerous academic awards, Neill studied and ‘may have taken early refuge in a kind of lonely stoicism. Religion, as well as nature and circumstance, may have conspired to mold him this way … Perhaps a less austere religion would have given the church a servant less deeply damaged.’

For despite all the academic success Neill was troubled by long periods of mental and physical ill health – with insomnia, depression and temper outbursts plus exhaustion – he himself acknowledged: ‘My fierce temper, the outward expression of so many inward frustrations’. The issue of his repressed sexuality is discussed in the autobiography. Neill had a negative attitude towards women involved professionally in Christian work, and was fond of being with young men, but wrote that both homosexuality and masturbation ‘falls below the level of genuinely human activity’. His biographer comments, ‘the possibility that he was a closeted gay man should not be ruled out.’

Leaving an academic career Neill became a missionary in South India and spent over twenty years there eventually becoming Bishop of the Tinnevelly diocese in 1939. He moved into ecumenism in Geneva working for the World Council of Churches, later taking on a professorship in Hamburg, and then working in Nairobi. His last years were spent in Oxford. He wrote 65 books and numerous articles many of which are still enthusiastically read and cited, and he achieved international fame and esteem lecturing and evangelising around the world; and the book details all these successes.

Previous biographies have either chosen to not know about, ignored, or glossed over Neill’s destructive side, and it is to Daughrity’s credit that this is openly acknowledged and discussed. Neill was unable to be candid about certain chapters in his life; even when confronted with his abusive behaviour he interpreted the situation differently –placing the blame on events and refusing to accept any wrongdoing.

From his earliest years in India, Neill used the cane and later a knotted rope as a form of discipline: ‘he utilised it throughout his life when he thought someone needed to be corrected.’ He was seen as both devoted to ‘the betterment of the diocese’ and as ‘overly autocratic’. One priest ordained by Neill showed deep ambivalence, commenting on Neill’s generosity and concern with the poor, yet, ‘He was very strict in many ways. He was a disciplinarian, an autocrat, imperialistic. Highly intelligent, he used to think very little of other people’. At a time of the movement for Indian Nationalism, and the struggle for independence the known incidents that led to Neill’s resignation carry the added horror of the weight of colonial rule. Neill was later described as ‘a famous colonial missionary’, but in Africa in the early 1970s was judged as displaying ‘racism and arrogance’, with ‘a bullyish etiquette’ insensitive to the African way of doing things and ‘exploitative to the people around him.’

His modus operandi remained the same in all the documented and known incidents of abuse included in the biography, where young men would be asked to report their good and bad actions. Neill would ask if they were prepared for punishment, and once they agreed would take them into a room and beat them on their bare buttocks.

‘When they cried, Neill stopped. Neill did this all throughout his ministry, even as Bishop. Advice was given to him by his supervisors and friends, but he continued to do it. Neill would often beat young people, mainly teenagers. Normally he would beat people aged 10-25 years. Older ones who were close to him were also beaten… Many advised him to stop, but he could just not stop’.

The situation that forced Neill to resign the bishopric involved a local school teacher whose village then complained to the diocese with a number of influential figures supporting the movement to get rid of Neill. Charges of violent assault would have been brought against Neill in the Episcopal Court ‘citing a number of instances of violent assault of clergy, laymen and teachers’, so he was forced to resign despite a powerful campaign to keep him as Bishop.

Neill returned to England and in his own autobiography did not give the real reason for leaving India. He worked for a short time in the faculty of divinity in Cambridge. While researching the biography, Daughrity was contacted by the painter Patrick Hamilton who recounted Neill’s punishment for his personal failings. Hamilton wrote, ‘Certain things [Neill] did have affected my whole life and now, at the age of 83, I still find him lurking in the dark places of my mind. I believe I am the one who reported what was happening and was probably responsible for his immediate removal from Trinity in about 1947.’ A further incident was fully documented dating from Neill’s time in Nairobi in the early 1970s and finally reported to Anglican Church authorities in July 2020. The account includes the victim’s suspicion that although remaining fully clothed, Neill found the experience arousing. Importantly this victim was able to confront Neill some years later when he threatened to repeat the beating, and able to tell Neill, ‘how inappropriate it was to spank a grown man. Neill was flummoxed.’ Neill regularly visited and stayed at Yale University in the US. In 1979 an eyewitness account reported the spanking of two or three young men following a small group discussion of the Christian tradition of ‘beating the body’ as a spiritual discipline. The witness to the scene reported: ‘he combined a biblical teaching with a practice that gave him pleasure.’ One of the men reported the incident, and Neill was told not to have private meetings with students. Another documented abusive incident took place shortly before Neill died whilst a senior scholar at Wycliffe Hall, Oxford. The victim was helping Neill preparing a book for publication when Neill asked the person to sit on his lap, and then discussed the need for punishment and began slapping them on the buttocks. Needless to say, this person avoided Neill as much as possible after the incident.

Whilst Neill did consult a psychiatrist about depression, he was unable to seek treatment for his beating fetish or what his niece referred to as his ‘sado-masochism’; nor were these incidents seen as criminal – so he was never prosecuted. His status and reputation were such that whilst many senior church authorities knew about his actions including Archbishop Donald Coggan, Neill was never held to account. Indeed, when Richard Holloway disclosed the abuse in a book review of an earlier biography in 1991, Holloway was castigated by many for not focusing on Neill’s ‘fruitful life and ministry’ and ‘the brilliance of the man’. Inevitably though more victims of his perverse behaviour came forward in the 1990s as a result of the publicity. The account from the victim who disclosed in 2020 suggests that currently there is ‘a growing file on Stephen Neill’.

So, what to make of yet another sad account of abusive practices in high places? Canon Eric James who in his role as Chaplain of Trinity College, Cambridge, ‘came to know the tragic truth’ of Neill’s compulsive abusive behaviour called in 1991 for ‘psychosexual understanding’ and for members of the Church to ‘examine the psychosexual basis of much that passes for theological conviction.’ Thirty years later as the abusive so-called ‘spiritual practices’ of Peter Ball, John Smyth and Jonathan Fletcher are reluctantly dragged into the light we might wish for the same thing. It’s not just about understanding though, it is also about confronting and properly bringing to account all abuse, and offering realistic support and help to victims. There is a need for understanding how emotional deprivation and illiteracy may re-emerge in abusive behaviour and linked to these, why senior clerics find it hard to face up to the need for professional psychiatric or psychotherapeutic help. Why is mental health and sexual well-being never taken as seriously as reputation and status?

The three conversions of the Christian Life