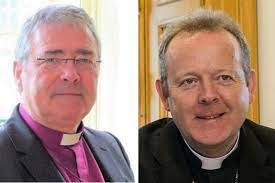 The Most Revd John McDowell, Archbishop of Armagh and [Anglican] Primate of All Ireland, has issued the following statement on the UK Government’s planned approach to the Legacy of the Troubles:

‘The announcement yesterday in the House of Commons of the path that the Government intends to follow in relation to Legacy issues in Northern Ireland will have created further heartbreak, frustration and anger for victims of the Troubles. The degree of suffering endured by victims over the years is not something that can be moved on from. It needs to be acknowledged in the full variety of its expression, and dealt with over the long term.

‘Failure to deal with Legacy has probably been the biggest political and societal failing since the signing of the Belfast/Good Friday Agreement. The one principle which all involved have been agreed on is that a general amnesty would be a morally empty response. Regardless of the name it goes under, a general amnesty is what the Government of the United Kingdom is now planning to put in place.

‘In a repeat of a dismal pattern, once again political interests in Great Britain have been used as the criteria for settling policy in Northern Ireland. Imperfect as they may have been, the carefully worked out provisions of the Stormont House Agreement have been set aside by one of the parties to the Agreement. Of course, that means a further erosion of trust in those who have been entrusted with just and fair government.

‘To believe that any process of reconciliation can be advanced by a measure that betrays the trust of victims, and of most ordinary citizens, indicates a profound ignorance of human nature and human suffering, and of the particular conditions of society in Northern Ireland.’

Archbishop Eamon Martin, [Catholic] Primate of All Ireland said in a statement:

The British government’s decision to ban all Troubles-related criminal and civil actions, and legacy inquests, will be seen by many victims as a betrayal of trust which denies justice to them and to their loved ones. It is disturbing that victims and survivors, those have paid the highest price for the fragile peace we all enjoy today, once more feel marginalised and neglected.

I was particularly disappointed by Prime Minister Boris Johnson’s naïve comments in the House of Commons suggesting that his legacy proposals would allow Northern Ireland to “draw a line under the Troubles”. At this painful time I ask for prayers of comfort for victims suffering on all sides in the conflict, and for truth and justice to prevail in the interest of the common good.

Dealing with the legacy of our shared past is not an easy task. It is a complex undertaking which belongs to all of us. It has no “quick-fix”. No “line can be drawn” to relieve the deep hurt still carried in the aftermath of years of violence, death and life-changing injury.

The 2014 Stormont House Agreement, signed up to in good will by all parties, sought to deal with our legacy in a collaborative and honest way which respected fully the input of victims in achieving consensus. It is therefore deeply disheartening to witness a key signatory renege on this joint commitment.

Sadly, this week’s announcement has been expected. In April 2020 the Catholic bishops in Northern Ireland published a considered statement criticising the UK government’s approach towards the legacy of the past. Its content included correspondence to the Secretary of State, Mr Brandon Lewis, and it remains relevant.

The bishops supported the ongoing pursuit of appropriate criminal, legal and civic justice for all victims. They addressed prioritising victims as the focal point of a response to dealing with the legacy of the past; equal access to justice for all; facing the past however painful; achieving authentic reconciliation for a just and stable peace; and concern that the proposed legislation for Northern Ireland would mirror the provisions of the Overseas Operations (Service Personnel and Veterans) Act 2021* which does not honour human rights, avoids the rule of law, does not offer justice to victims, nor provides for a modality to underpin long-term peace and stability in a transparent, fair and equitable context, see: www.catholicbishops.ie/2020/04/08/catholic-bishops-in-northern-ireland-criticise-uk-governments-approach-to-legacy-of-the-past/

As the British government is now facing criticism from all quarters concerning its unilateral decision, the announcement begs the age-old question: “Cui Bono?” (“Who benefits?”).