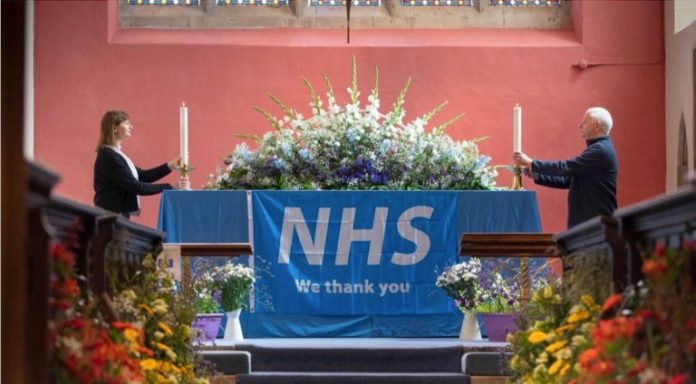 It’s not an easy thing being a national Church; especially when the nation and the Church want very different things. But has the C of E crossed the Rubicon of sacrificing its identity as Church in order to provide the nation with a comforting taste of spirituality on its own terms? Has it baptised an unholy social humanitarianism and backpedalled on the Holy Trinity?

Being the state church  comes with complex privileges and some responsibilities.

The privileges include that the Vicar of a parish inherits a status that neither the Methodists or the Catholics enjoy; the Anglican communities own the grandest buildings in both city town and country, and bask in their reflected stature and beauty. At all the state occasions, their senior clergy are there somewhere.

They get to speak to the nation about God, and to presumably (if they are saying their prayers) to God about the state of the nation.

But it’s not easy. There are moments of national crisis when tragedies, and even pandemics needs interpreting to a society that has a very primitive and underinformed view of God. Looking back over the last one hundred years, how well has the C of E managed to be the national church? What happens if a secular nation decides it wants a new religion?  In the wake of Covid, has the NHS become the new state religion?

It’s largely agreed that the Church of England did an underwhelming job in the twentieth century. It never really managed to help the nation come to terms with the mass butchery and slaughter of the first world war. The consequence was a widescale growth of atheism and agnosticism. The widespread question “how could a just God allow this to happen” went unanswered. Other traditions, like the Catholics following the explanatory apparitions at Fatima,  began a painful journey of exploring the consequences of unrestrained hedonism, but the C of E was unable to help the country interrogate the hubris of nationalism and aggressive competitive colonialism.

It didn’t cover itself with glory in the great depression. It seems to have the unfortunate knack of backing the wrong side in social conflicts. In the 1930’s it’s instincts were set too far to the Right, when the poor and vulnerable were very  poor and dangerously vulnerable.

And since the 1980’s, with only 6% of Anglican clergy voting conservative it has rushed Gadarene like to the Left, just at the moment that the most precious and vulnerable remnants of Judaeo-Christian culture are under sustained assault from the Left, and if ever they needed conserving, it is now.

It found less difficulty identifying evil in the guise of the Nazis in the second world war, but the moment one of its courageous voices had something to disturbing to say about the morality of carpet bombing, the country recoiled and the Church largely recoiled in horror at having its conscience pricked. Bishop Bell of Chichester, one of the few voices that can be claimed to have an element of public prophesy, was disowned and side-lined then, and courtesy of the present Archbishop of Canterbury,  unwilling to accept the authority and skillset of a leading judge who exonerated Bell of abuse charges, completely cancelled now.

It was embarrassed by the sexual revolution of the sixties, but instead of developing and defending a theology of sexuality and continence rooted in the long experience of the pursuit of holiness down the centuries, it turned to the emerging therapies for a new road map of appetite and identity. It began to slowly abandon traditional morality to be in tune with the hedonism, consumerist narcissism  and secularism of the times.

It has placated its growing number of feminists without questioning the transition from Biblical to secular modelling. Admittedly this act of discernment has been a difficult call. The shift from first wave to third wave feminism was hard to foresee for many. But having seen it, it has swallowed the camel of gender relativism while choking on the gnat of the complementarianism that the Judaeo-Christian tradition gave birth to.

It took a self-imposed oath of silence over the moral issues raised by the fate of nine million pre-born children terminated since the 1969 Act. Astonishingly, it had nothing to say about the anti-democratic enforcement of abortion on N. Ireland against the will of its people.

During the pandemic it closed and locked the doors to its churches. The Archbishop took to his kitchen.

But behind these failures of discernment and judgment lies a more problematic dilemma for an Erastian church. There always remains the critical difficulty for an  established national of what to do if and when the nation you are chaplain to, rejects both the concept of the God you represent, along with the morality of the tradition that accompanies it?

If you have failed to adequately represent the interests of the God of the one, holy catholic and apostolic church, by being founded on authoritarian state sponsored schism, preferring therapy to self-denial, pioneering secular values at the cost of universally respected traditions, and celebrating ‘progress’ at the expense of your foundational values, perhaps this serious compromise of core values can be expected to have an impact?

But there is also the question of the extent to which the Church has the confidence to reflect back to society questions about the values it is pursuing. This takes both courage and good judgment. If the secularisation of society takes it in a direction that is the opposite to the ethics and values the Church stands for, at what point does the Church have to warn society that it is turning its  back on God?

There is a point on the developing line of engagement when the gap between a secularised society and the faith of the Church gets stretched to breaking point. The Church has either to warn, educate, evangelise and speak prophetically to such a society, risking its displeasure and scorn, and risking its privileged status and raison d’etre,  or change the focus of its faith.

It has not dared so far to challenge the assumptions of the society it has nominal responsibility for; so it appears to have opted to change its message instead.

It’s not easy to know when exactly the C of E abandoned its belief in heaven and hell and the need for souls to be saved, but in accompaniment to toning down its baptism liturgy to avoid referencing of offending the devil, it has shifted the focus of its attention and concern to the body, single and politic rather than the soul.

So perhaps the actions of St Mary’s in Tenterden, a rather beautiful church in Justin Welby’s own diocese, do indeed speak for the whole Church of England in celebrating the National Health Service and edging Jesus and his sacrifice on the cross for the salvation of the soul, out of the picture.