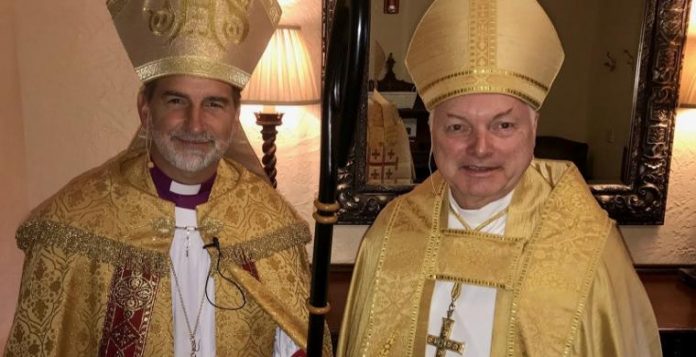 This month the General Council (the equivalent of a Provincial Assembly) of the Reformed Episcopal Church and the following week the Provincial Council of the Anglican Church in North America (ACNA) met.  No doubt the highlights were the addresses by their lead bishops, the Presiding Bishop of the REC Ray Sutton and the Archbishop of ACNA Foley Beach.

Both were wide ranging addresses that merit complete and thoughtful reading.  Personally I consider the first by Bishop Sutton to be his finest moment.  And Archbishop Beach’s pointed remarks on social media conduct will be long remembered.  But the most timely passages of their addresses dealt with Critical Race Theory and related aspects of identity politics in the church.

I will not rehash those passages.  Again, both addresses deserve to be read fully on their own terms.  But both directly opposed Critical Race Theory, particularly the notion that virtually “all people of certain races are racists and all institutions of certain countries are racist” (Foley Beach).  Ray Sutton additionally disputed CRT exempting people of color from racism: “All races have racists but not everyone in a given race is a racist.” He spoke more at length on the subject, and Archbishop Beach commended Sutton’s address for study.  Both also emphasized that the primary identity of the Christian is in Christ and that care should be taken to avoid diminishing that with hyphenated identities.

The latter area, particularly relating to “Gay Anglicans”, has already been well addressed by the College of Bishops.  But the former of Critical Race Theory (CRT) has not.  There are good reasons for that.  First, there was a commission examining the area of racism and racial reconciliation last year, and the Archbishop asked for restraint during that time.  Second, the College of Bishops has collegiality as a high priority.  Therefore they avoid making statements that are not unanimous.  (Whether they place too much weight on collegiality is another question for another day.)  And the College is not at the point where it can speak with one voice in the area of Critical Race Theory.  It may be far from that point.

At the same time in ACNA, prominent clergy and at least two or three bishops have been pushing CRT and related ideologies.  This is problematic in itself but has also stirred up discontent in ACNA among those opposing these ideologies. Unity in ACNA has never come easy; wokeness within ACNA has made it that much more difficult.

And so the addresses were all the more needed.  Think about what the situation would be if the two bishops had not spoken out.  Public statements from bishops and prominent clergy in this area would remain mixed at the very least.  You would have had a silent College of Bishops (which apparently decided not to issue a communiqué after their meeting), and you would have had two major addresses putting off the subject.  At a time when CRT is such a presenting issue in both church and society and when many are finding their voice in opposing it, silence would not have been a good look.  And the patience of those rightly opposing wokeness in the church would have been sorely tested.

So I am all the more thankful Bishops Beach and Sutton were not silent.  I will not speculate on how much their timing was intentional, but it was certainly providential.

And it prompts me to revisit my previous article for Anglican Ink.  In it, I expressed the concern that “the most prominent public voices of ACNA, with the exception of Archbishop Foley Beach, tend to be to outside or barely in the mainstream of ACNA” particularly in being “wedded to Liberal/Left political activism” that drives faithful way.  I soon found out that some found my concern overwrought and unartfully expressed, and I understand their displeasure.

But now Bishops Beach and Sutton have suddenly turned the situation around.  They have become the most prominent public ACNA voices in the area of Critical Race Theory and related identity ideologies and on the right side while at the same time reemphasizing the importance of racial reconciliation and of witness and ministry to people of every background.  Who knows if, instead of repelling, this will attract people, particularly when the Presbyterian Church in America and the Southern Baptist Convention are struggling so with these issues. Speaking of attracting people, there was this interesting announcement from the Archbishop:

We are also in dialogue with several Black leaders who are seriously considering and working toward bringing their denominations into the ACNA. They discovered Anglicanism and would like to become part of us. The ACNA has an opportunity to get this right if we will make the effort.

In a way the two bishops may have just proven me mistaken – which is not easy to do! – and I am glad of it.

Struggles remain in this area.  The addresses are not a cure-all and really cannot be given our polity.  Whether certain dioceses pull back on wokeness remains to be seen.  And Provincial Initiatives such as AMEN remain in need of reform.  Perhaps Archbishop Beach hinted at that in calling AMEN to its original mission of “encouraging the church to better embody the universal saving power of the gospel through planting multi-ethnic churches [and] increasing the presence of people of color in existing churches.”

Nonetheless, the two bishops have now set an excellent and prominent standard.  They have pointed us in the right direction in this area.  And they have made it much easier for us unwoke to exercise patience as we unevenly move in the right direction.  These were the addresses that needed to be made.  And Presiding Bishop Ray Sutton and Archbishop Foley Beach delivered.

Alistair Begg: ‘The UK has been through an immoral revolution’

Lambeth Conference 2022: The History, The Division and the Way Forward

The Global South Fellowship of Anglicans – Power and Numbers?